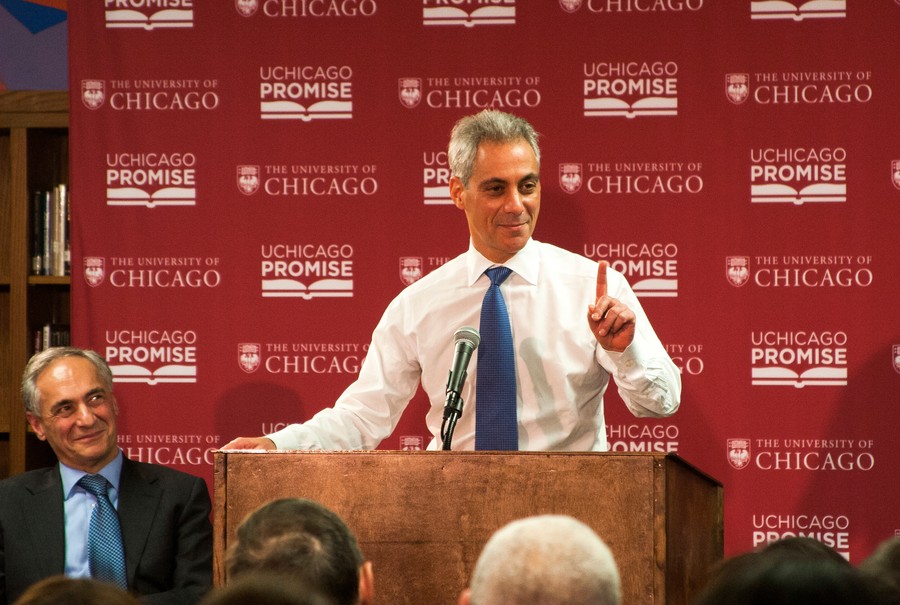 The University and Mayor Rahm Emanuel announced an umbrella program yesterday that will group together financial, academic, and application resources for potential applicants to the U of C and similar institutions under one name: UChicago Promise.

Part of the program will replace loans with grants for all admitted students from Chicago, ensuring that Second City natives will graduate from the University debt-free.

The program answers a call from the Mayor to local universities to make themselves more accessible to Chicago students, according to University spokesperson Steve Kloehn. The impetus for the launch of UChicago Promise also came from a study by the University’s own Consortium on Chicago School Research which found that only 28 percent of Chicago Public Schools (CPS) students who are qualified to attend a selective college enrolled in one.

UChicago Promise also includes an automatic waiver of the U of C’s $75 application fee for local students, a new Admissions Academy to help with the college application process, and a set of Jeff Metcalf internships that will recruit students from the College to work on the Promise programs.

The Promise will also bring preexisting scholarships for Chicago students, the Neighborhood Schools Program, the Collegiate Scholars Program, and similar opportunities already scattered throughout the U of C infrastructure under a new Web site that will make opportunities the University provides easier for students to discover.

The University’s current Odyssey Scholarship program replaces federal loans with grants for families with annual incomes less than $75,000, while UChicago Promise does not have an income ceiling for its no-loan policy. Meanwhile, Harvard University, Princeton University, and the Claremont Colleges are among a handful of colleges that have eliminated loans for all students.

The UChicago Promise financial benefits will take effect for those applying this year, and will not be available to help those who have existing loans or who have already matriculated.

This means that the 50 or so current first-years from Chicago do not benefit from the program, according to a University press release. More than a third of them are receiving full-tuition scholarships through the Chicago Police and Fire Scholarship offered by the University to the children of City police officers and firefighters.

Hauad said in an interview that the Admissions Academy will consist of workshops on essay writing, financial aid forms, and other application instructions, and it is the main part of UChicago Promise not specific to U of C.

“[The sessions] fit for what we’re evaluating and how we’re looking at applications, but it’s, ‘well, if you’re applying to any of the other great schools out there, I’ve worked at them, I have friends at them, I know that we all do it the same way,’” Hauad said.

Hauad also said that the admissions office has experience with this type of programming. For two days of the CPS teachers’ strike this fall, the Admissions Office held workshops similar to those that will be offered by the Academy,.

Glispie, a Chicago native who worked with Hauad through last year’s application process, said at the press conference that Hauad’s support encouraged her to apply to the U of C and could do the same for others.

As part of his announcement speech, Mayor Emanuel said he strongly supports the University’s initiative.

“If a child and a parent get to the first yard line, the University [now] has its door open, not shut, to making this possible,” he said.