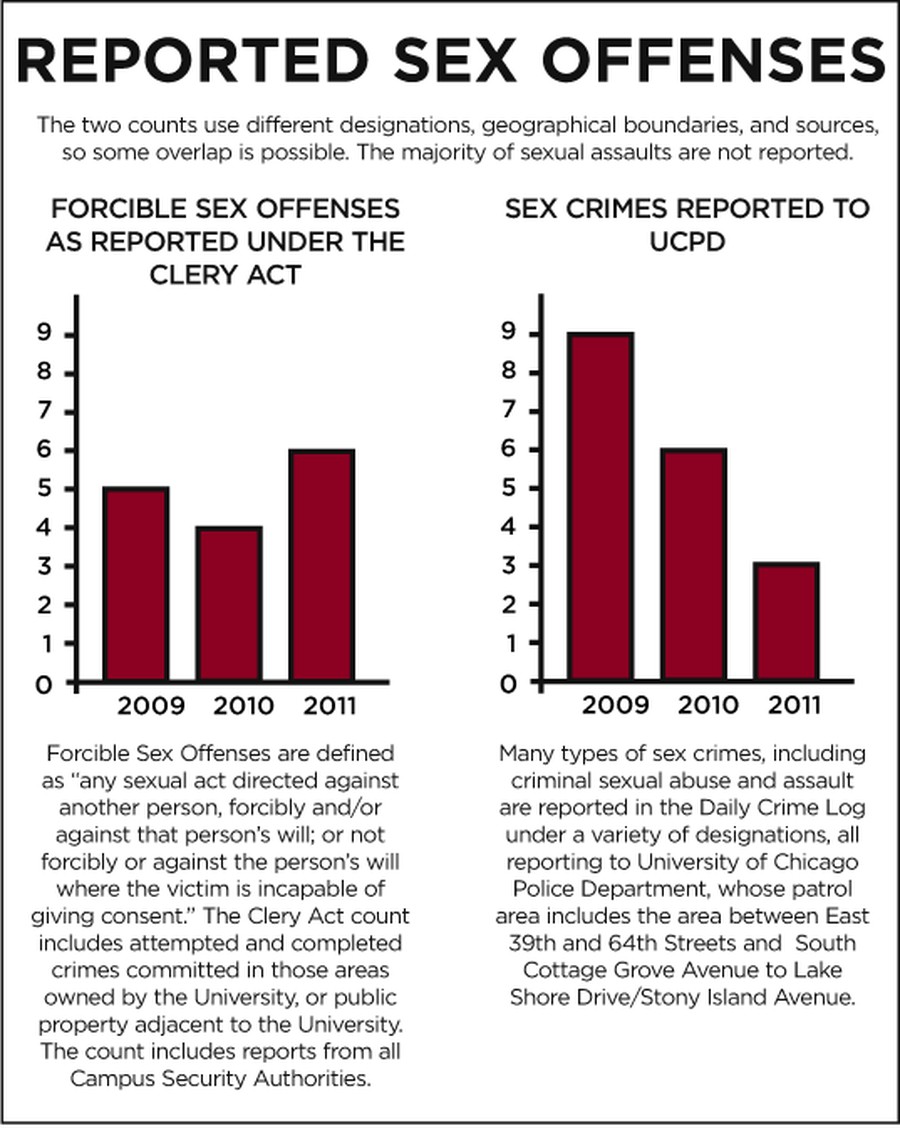 Every fall, the University, in its “Common Sense” guide, publishes crime statistics from the three previous calendar years, including sexual assaults. This information, along with Daily Crime Logs, is published in accordance with the Jeanne Clery Disclosure of Campus Security Policy and Campus Crime Statistics Act (Clery Act). A combination of factors, from the underreported nature of sexual offenses, to the Act’s exclusion of student apartment incidents, means that the Clery count represents only a fraction of the sexual assaults at UChicago. Local violent crime statistics supplement the University’s federal reporting requirements. Even with this addition, the picture of sexual assault at UChicago remains incomplete.

The Clery Act is over 20 years old, and covers policy and statistical disclosures as well as treatment of victims. Amendments over the past two decades have expanded reporting requirements and added a Campus Sexual Assault Victims’ Bill of Rights.

The Department of Education manages enforcement of the Clery Act, and peer institutions like Pennsylvania State University and Washington State University are among those who have been saddled with hefty fines for noncompliance. The Act is designed to allow for flexibility across highly varied university models.

Marlon Lynch, associate vice president for Safety & Security, Chief of Police, is also the former president of the International Association of Campus Law Enforcement Administrators. He reflected on the varied interpretations of Clery Act compliance.

“It’s not a cookie cutter process, because all institutions are different. You go from a large institution with 50,000 students to a small liberal arts school in the northeast, obviously the structure is going to be a little different,” said Lynch.

UChicago has never been in violation of the Clery Act, according to Department of Education records.

An emphasis of the Clery Act is that reports be collected from campus bodies beyond the police, in part because of an acknowledged trend against official reporting of crimes like sexual assault. All reports are submitted without identifying the victim or perpetrator. Reports for the count are solicited from those designated as Campus Security Authorities (CSA), individuals with a large responsibility for the student body. UChicago designates figures including Deans-on-Call, advisers, Resident Heads, and coaches as Campus Security Authorities. According to University spokesperson Jeremy Manier, the University solicits reports from its Campus Security Authorities on, at minimum, a quarterly basis. Before inclusion in the annual Clery report, the CSA-submitted reports are crosschecked against UCPD reports by the Office of Legal Counsel to avoid duplications.The Act acknowledges the tension between obligations to the public and obligations to victims. It specifically notes that some individuals—pastoral and professional counselors—have counselor privilege, which excludes them from reporting requirements in order to protect patients. At UChicago, Student Counseling Services (SCS) has counselor privilege. However, according to Associate Director for Education and Outreach Dana Regett, SCS does keep a count of those patients that report sexual offenses, but this count does not distinguish between those who were assaulted during their time at the University or in the past. “We do keep some attempt at numbers of different problem areas presenting problems that people come in for...but sexual violence is a huge category—it might include something that happened to a graduate student when she was an undergraduate at another place or incest. We don’t break that down.”The Clery Act sets out geographical subcategories for reporting crimes, which include residence halls and other campus property, as well as public property directly adjacent to campus. The University’s count also includes those crimes which take place in fraternity houses.The Act does not mandate inclusion of those crimes which take place on non-University private property. As such, sexual assaults that take place in student apartments, which house over 50 percent of the University student body, are excluded from the official Clery tally.However, the Daily Crime Log, which is also mandated by the Clery Act, includes all crimes reported to the UCPD, including those that take place in private residences within the UCPD patrol area, which spans from East 39th to 64th Streets and South Cottage Grove Avenue to South Lake Shore Drive/Stony Island Avenue.

The different totals may in part be explained by the different purviews of each report. The Daily Crime Log and the annual Clery report span different areas and come from different sources. The Clery Act count includes assaults reported to bodies other than the campus police force, and omits those crimes that occurred off-campus.

Asked about the effectiveness of a reporting rubric that excludes sexual assaults that take place in off-campus residences, Lynch cited a previous employer.

“At Vanderbilt, 98 percent of the undergraduates resided on campus...that information to them is relevant, because that’s where they live, that’s where they’re in all day, and that’s different. Here, it’s the exact opposite. About 47 percent reside on campus. So the very nature of it is, the impact would be more for the larger on-campus population.”

Awareness is hindered by such compartmentalized statistical representations, but also hurt by a low tendency to report sexual assault crime, a weakness of which Lynch is particularly cognizant.

“Based on the fact that sexual assault doesn’t always get reported, or is the least likely to be reported, it’s hard to say that we’re giving a true or accurate depiction of what is actually going on around sexual assault on campus,” Lynch said.

At the same time, Lynch affirmed the goal of awareness that drives statistics publication.

“As a member of this community, you have the right to know what’s going on.”

The Maroon is committed to achieving as thorough knowledge as possible of all aspects of this issue. If you have information on the history of the University of Chicago’s policies in regard to sexual assault, or if you or someone you know has experiences relating to sexual assault and/or subsequent hearings, please contact us at hannah.nyhart@gmail.com or joycrane7@gmail.com.