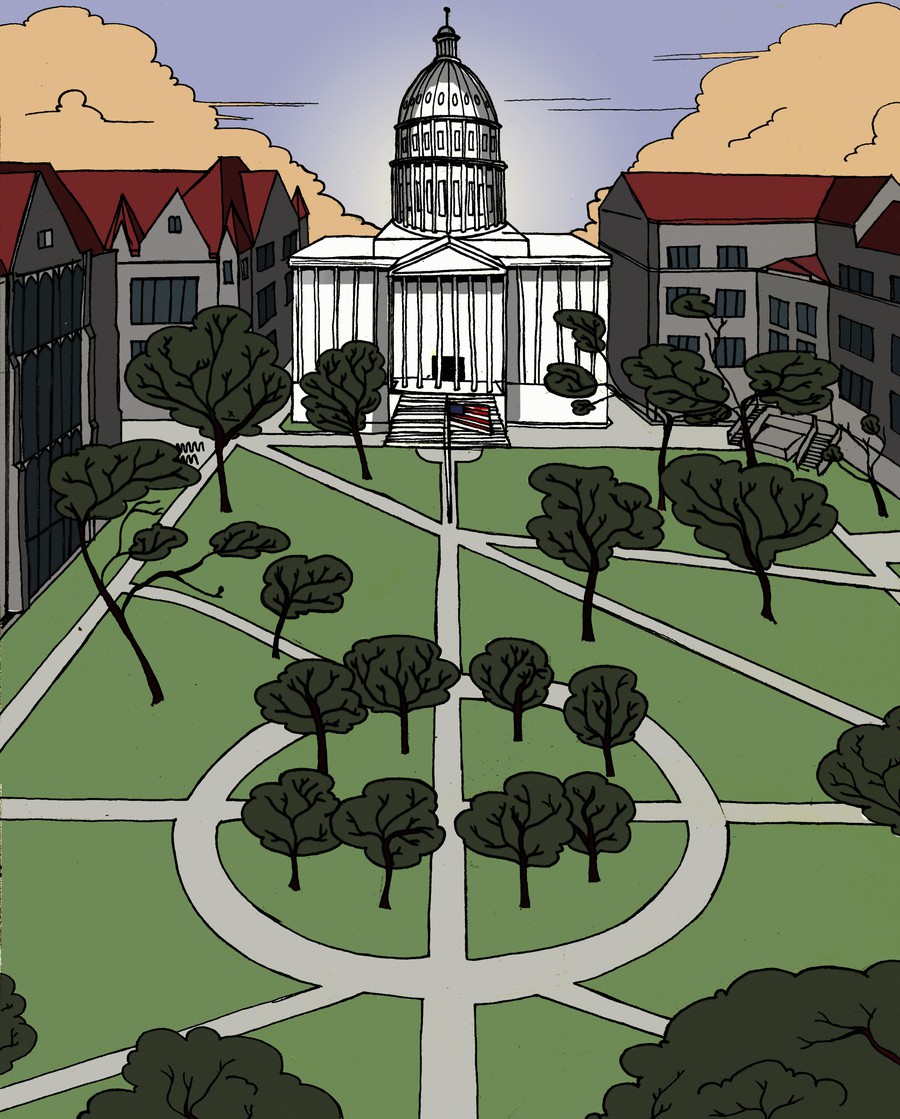 The image of federal lobbyists as morally-bankrupt corporate hacks intent on squeezing every last dollar away from more worthy causes—à la Jack Abramoff, or Aaron Eckhart in Thank You for Smoking—is one students probably don’t often associate with their school’s administration. But the U of C, like most other major universities, regularly hires lobbyists as employees of its own. The Lobbying Disclosure Act of 1995 defines a lobbyist as a person who makes $3,000 or more from lobbying work over a three-month period, spends 20 percent or more of his time on lobbying activities for an employer or individual client, and makes more than one lobbying contact. The latter is defined as any communication with a member of the executive or legislative branch, or their respective staff, on behalf of a client about federal law, policy, programs, or similar government work. A salaried employee of the University stationed in Washington, D.C. primarily for the purpose of lobbying would fit each of these criteria.

The rise in federal lobbying among universities began in the 1980s in response to budget cuts in research allocation during the Reagan administration, according to University of Virginia professor James Savage, author of Funding Science in America: Congress, Universities, and the Politics of the Academic Pork Barrel. The federal government has long been funding university research, so when this pool of money shrank, universities started lobbying for it.

“It was really a shock to universities who had come to rely so much on the federal government for research funding,” Savage said in a phone interview.

The traditional way to secure funding for research is through peer review, a self-regulating process whereby grants are given out based on expert review of research proposals. But, Savage said, this process tends to work in favor of the “usual suspects” of the “old-boys system,” citing schools like Harvard, Stanford, the University of Michigan, the U of C, and other peer institutions. In order to get their own research money, other universities started seeking funding through earmarks—funds provided by Congress that bypass competitive allocation procedures. It has been long-standing U of C policy to only use the peer review process, Savage said.

In addition to research money, universities also lobby for bills that affect other institutional aspects, such as financial aid, education policy, tax policy, and health care financing. For example, University lobbyists worked on the America Fast Forward Financing Innovation Act of 2011 (H.R. 4348), citing the Stafford Student Loan program, which dealt with a proposed increase to the interest rate, and University of Chicago Medical Center Medicare funding as the specific issues lobbied for.

The University’s permanent presence in Washington began in 2008 when it established the Office of Federal Relations. The Office’s director, currently Matthew Greenwald, reports to Vice President of the Office of Civic Engagement Derek Douglas.

The creation of the Office came two years after the University became one of only two universities in the nation to oversee two national laboratories simultaneously (the other is the University of California)—in 2006, the University became a co-manager of Fermi National Accelerator Laboratory and successfully retained control of Argonne National Laboratory, both owned by the U.S. Department of Energy. Additionally, the office was spurred by a Senate request in 2008 for endowment information from the 136 wealthiest universities, including the U of C, which had the 13th largest endowment. At that time, Senate regulation of college spending seemed possible, and the University supplied the Senate Finance Committee with information about its financial aid and endowment policies. The request also came in the midst of Senate hearings about the growth of college endowments concurrent with the rise of college tuition.

Before 2008, the University’s contact with the federal government was generally done from campus. Monitoring proposed legislation for issues relevant to the University’s interest would only be part of an administrator’s job. The opening of the Office was the first time University employees were stationed in Washington full-time for the purpose of lobbying. In addition to the employees of the Office, the University sometimes enlists outside lobbying firms with expertise in particular areas relevant to legislation of interest. Other times, the work is done in conjunction with groups like the Association of American Universities.

According to the Web site OpenSecrets, an aggregator of contributions made to Federal campaigns, U of C lobbying expenditures since 1998—as far back as OpenSecrets has been tracking such data—have been between about $100,000 a year to about $250,000, except in the years 2006 and 2007 when total expenditures were $640,000 and $620,000, respectively.

The timing of this spending peak correlates to one described in a January 2012 Atlantic article “Don’t Blame For-Profit Colleges for the Higher-Ed Lobbying Epidemic,” which says that many universities drastically increased their lobbying expenses during the 2008 reauthorization of the Higher Education Act. A point of particular contention regarding the act, the article said, was a proposed amendment (H.R. 4137, or the College Opportunity and Affordability Act) that would collect students’ post-graduation experiences in the job market, which would allow families looking at colleges to compare them in terms of their returns. The lobbying successfully blocked the effort and resulted in an explicit provision banning the federal government from collecting that data.

According to OpenSecrets, University lobbyists worked heavily on this bill. The specific issues reported as lobbying activities included preparation for possible future lobbying efforts “regarding Senate Finance Committee deliberations that could affect endowments,” “regarding a publicity effort to inform students, parents, and others regarding language in the Higher Education Reauthorization bills,” and a “strategy session with The Science Coalition regarding best methods to boost federal funding for university-based research,” among a host of other issues.

Given the U of C’s longstanding administrative adherence to the Kalven report, which promotes political neutrality, the implications of a Washington office with an explicit mission to lobby for University interests are yet to be seen. But, as Savage said, “There’s no good research university that cannot successfully solicit money from the federal government.”