Lifting the lid on the growing UChicago start up community up against stacked odds. 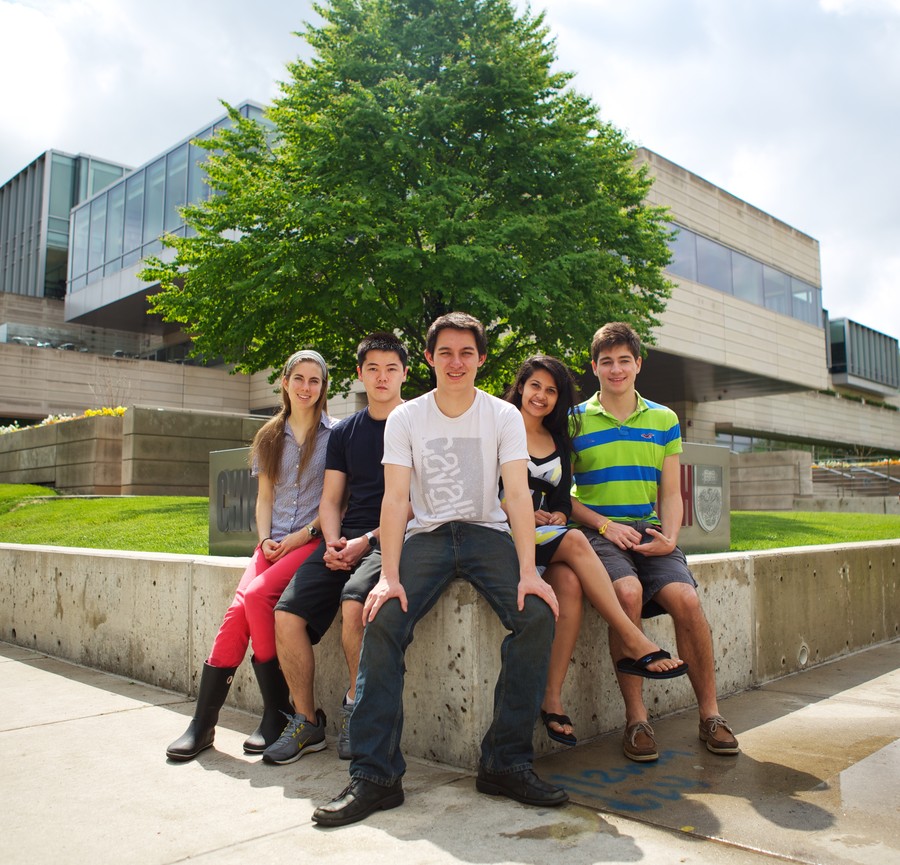 The legend of the college start-up has become something of a 21st century cliché. A group of guys (and, yes, it’s mostly the guys) meet in a freshman dorm room at one of the top universities in the country. They start a company, win big money. It’s the Genesis story for the digital age’s American dream, gospel legend for post-yuppie climbers.

In recent years, UChicago has churned out a handful of start-up frontiersmen. Kip Solutions, a social media consulting company, was founded by fourth-year Patrick Ip in 2011, then a second-year in the College. In 2012, Ip and his partner, Harvard undergraduate Kavya Shankar, raked in $10,000 of Booth School capital, and this year the company was acquired by New York consulting firm, Post+Beam. Then there’s Sugar Bliss, a cupcake delivery service that evolved into a storefront establishment in 2009, founded by Teresa Ging (A.B. ’00). And finally there was Entom Foods, a highly publicized venture founded by a team of UChicago undergraduates led by third-year Matthew Krisiloff that produced insects as a sustainable food source. Entom won the inaugural College New Venture Challenge for 2010–2011, and has graced the pages of The New Yorker, The Wall Street Journal, and The New York Times.

In conversation with this breed of UChicago entrepreneurs, sometimes a translator is in order. They aren’t exactly techies, nor are they your Scav-seasonal engineers moonlighting in the practical avenues of the business world before ascending the ladder of academia. Phrases like “minimum viable product,” “angel investor,” and “lean start-up methodology” creep up often, as do “gamification,” “accelerator,” “what’s your exit” and “go-to-market strategy.”

But often more important than the portmanteaus and neologisms are the acronyms.

Project SAM (SMS Accounting Management) is an application designed for “dumb phones,” aimed at assisting health-care clinics in the developing world to better track inventory and manage supply shipments. And its CEO and CFO are both trying to finish the Core.

While their story makes for good local news copy and would make quite a few mothers proud, it hasn’t quite carved out its space among UChicago start-up successes. The tempered reception of Project SAM’s young achievements—less flashy than the likes of Entom Foods and Kip Solutions—hints at the growing regularity of its kind. And this proliferation of mid-range start-up ventures is being newly matched by a nascent University entrepreneurial support system. Quietly, without its characteristic buzz and flash, an entrepreneurial scene is finding its footing at UChicago.

Second-years CEO Daniel Yu and CFO Victor Kung met as first-years in the College. Yu spent his first year bouncing around a couple of intense academic ideas. Having studied music composition very seriously in high school, he picked up an interest in Arabic and linguistics. Kung settled into economics right from the start. In the spring of 2012, though, a quirk of housing turnover introduced them to part-time undergraduate Raghu Betina, a former college dropout and “serial entrepreneur” who returned to academia from Indiana University to finish his B.A. in economics at UChicago. “I think it started with moving into the eighth floor apartment [in South Campus] and meeting Raghu,” Kung explains. “That was definitely the turning point for both of us.”

Betina’s story is an inspiring one, to be sure. The triumphant young venture capitalist returned to his undergrad career after a successful run in the international start-up world, returning a forceful advocate for the power of buildable technology. The sole student selected to speak at the annual TEDxUChicago event in May 2012, Betina spoke about “the coding revolution.” The gist of his TEDx talk was simple: Anyone can learn to code; everyone should learn to code.

Yu describes the catalyst behind his own entrepreneurial success in the same way as Kung: “Meeting Raghu and getting a perspective on this whole world out there…that everyone should learn to code, and then how that empowers people to build their own ideas.”

So a pre-pubescent Project SAM had found its mentor. Next up: an idea. Yu’s first “foray into building an idea” was, by all traditional accounts, a flop. His application “SafeRide Mobile” was a finalist in the Mobile App Challenge, an ideas competition (teams are evaluated on their pitch only) run by IT Services and the Polsky Center for Entrepreneurship and Innovation at the Booth School. Theoretically, the app would efficiently route SafeRide around Hyde Park by having students request the service through a GPS–tracked smartphone application. But Yu’s first lunge into the start-up world was smacked down by a double blow. Not only was he not selected, but also the premise of his first idea imploded when NightRide replaced SafeRide in 2012.

Still in his first year, Yu had caught a bit of Betina’s zeal for “buildability.” “Once I started to learn these skills and see how they could be applied, I started thinking about my personal ideas that I could build out. And that’s actually where I came up for the idea for Project SAM,” he said.

Yu’s piqued interest coincided with an increase in resources for entrepreneurship. Just this year, Career Advancement, with the support of the Polsky Center, awarded $20,500 in aggregate to a group of undergraduate start-up teams through the College New Venture Challenge, which began in 2010. Fall 2012 brought new funding for the Polsky Center to shower on undergrads, and a new Career Advancement adviser. Hanging around the third floor of Ida Noyes, it’s hard to miss Director of UChicago Careers in Entrepreneurship Jerry Huang (just ask for Jerry—he’s on first name terms with nearly everyone). Huang has a presence as warm as his booming, jovial laugh. Many students involved in the start-up community are quick to credit Huang with the uptick in entrepreneurship ventures this year. But Huang himself credits the Alumni Board of Governors, the Board of Trustees, and University President Robert Zimmer.

He also doesn’t tie the increase to any single year. “It’s a genesis that has been coming for a few years…. If I wasn’t here, I think there would still be entrepreneurial activity going on.” While it’s hard to argue against the money that’s been fronted by Career Advancement—seen by the students through personnel changes, Booth School connections, and eye-catching prize money—Huang’s personal touch has certainly made its own significant impression.

Project SAM has seen some early returns on the University’s investments. The team now consists of seven people from UChicago and Stanford, who have work experience in China, India, Egypt, and Peru. With contacts in the Ministry of Health of Peru and various NGOs through the UChicago chapter of GlobeMed, Project SAM has grown into more than just a good idea. With Yu at the helm, Project SAM has thrown down its gauntlet at six different collegiate competitions in just one academic year. The group was flat-out rejected from the first, an MIT competition with a $100,000 prize at the finish. But after an initial round of rejections and some “hard feedback,” Yu says, the team went on to be named “Resolution Fellows” at the Social Venture Challenge at the Clinton Global Initiative University conference to the tune of $5,000.

Yu, Kung, and second-year team member Hope Bretscher, just returned from a fruitful trip to Silicon Valley where they won the World Citizenship Competition within Microsoft’s Imagine Cup finals. Along with another check for $5,000, this competition afforded them the opportunity to form partnerships with Microsoft and Twilio Cloud Communications, to network with the industry’s elite, and to discover that Stanford undergrads must have scads of free time to work on their projects. Yu himself has had a taste of what that “free” time feels like: He’s been on academic leave since winter quarter. When asked if he’s planning to return to classes next fall, he turns a little coy.

For all the recent growth in institutional support, the part-time status of many young entrepreneurs here brings into question the compatibility between the College’s rigor and start-up culture. Yu says that his return will depend on Project SAM’s success this summer in the final round of Booth’s Social New Venture Challenge, where they were selected as the sole undergraduate team among six finalists, narrowed down from a pool of 16 UChicago teams.

Many other College entrepreneurs have also chosen to go part-time this quarter in preparation for the upcoming College New Venture Challenge. And many of the team members expressed their concern with the knowledge gap that sits between a start-up’s business plan and the syllabus for the economics standard core.

However, Huang and other Career Advancement advisers seem confident that the College’s recent boom in entrepreneurship is just UChicago students tech-ifying the University’s great legacy for innovation across all disciplines. “You can go all the way back to the founding of the University and there’s been innovation in all fields,” said Marthe Druska, director of Student and Employer Services and Communications. “Now we’re at the point, having Jerry here as program director…along with all the other things that are happening on campus and in the Chicago region, it’s this very large and exciting continuation of all the innovation and entrepreneurship that has come before.”

Few came to the College intending to enter the entrepreneurship game: not Betina, not Yu, not most of the team members competing in the College New Venture Challenge. Even if the barrier to entry for the start-up world isn’t overwhelmingly high, there are quite a few challenges on the road to that first $10,000 check. But the opportunities are here, they’re growing, and there are fat cash rolls paving their future.