11,143 students applied this year, an 8-percent rise from last year. 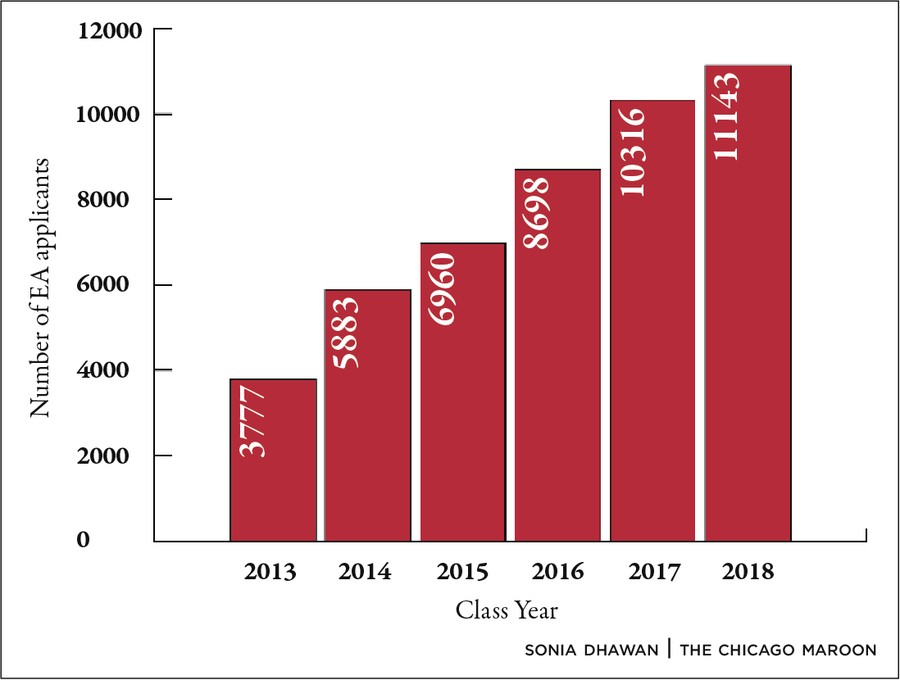 More students than ever applied for early action to the College this year, marking the fifth consecutive year of an increase in these applications.

This year, 11,143 students applied through the College’s non-binding early action program, an eight-percent rise from last year’s 10,316 applicants. In a press release, the University reports an increase of 6.7 percent, due to an additional 130 early applicants from last year not accounted for in the initial official numbers that were released.

The College accepted 13.4 percent of applicants from the first round of admissions last year, according to The New York Times blog “The Choice.”

The number of early action applications has risen 89.4 percent since 2009, when James Nondorf became the dean of college admissions and financial aid and when the College began using the Common Application.

The College has seen, on average, a 20-percent increase in the number of early applicants every year since 2010. According to University spokesperson Jeremy Manier, what this year’s comparatively low rate of increase signifies is unclear for now.

“I think the expectation is that at some point you’ll see the number reach the natural level, and it’s difficult to tell whether we’re there yet,” Manier said.

Last year, early applications comprised about a third of the total pool of 30,396 applications. The overall acceptance rate was 8.8 percent.

According to a University press release, this year’s early applicant pool is also highly diverse. Students applied from every state and 79 countries, also a record high for the College. Domestically, the most number of applications by state came from Illinois, followed by California and New York.

Cultural diversity increased as well, with more applications from African-American and Latino students, according to the press release. Internationally, the leading countries by number of applications were China, India, Canada, and Singapore.