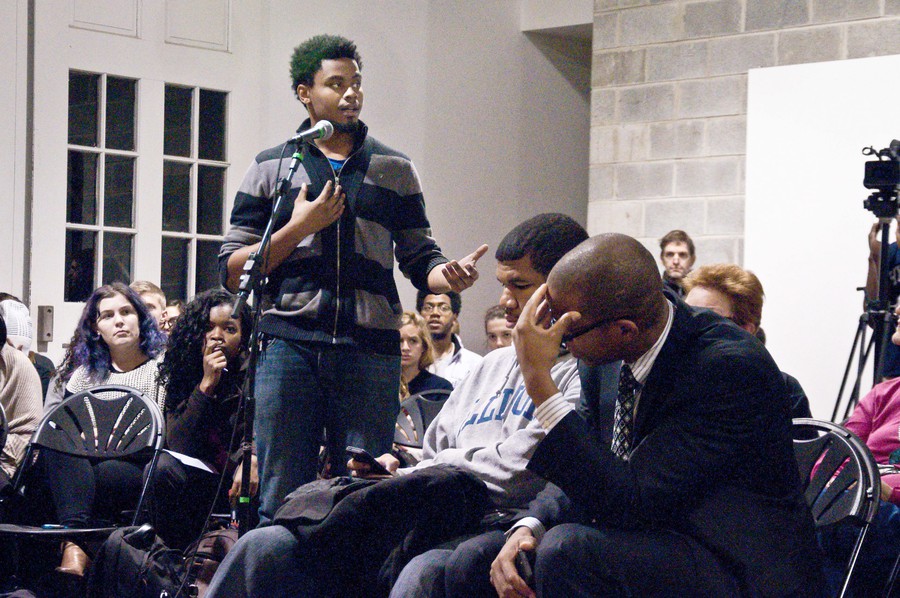 The Coalition for Equitable Policing (CEP) joined the Invisible Institute, a Chicago-based production company that seeks to increase visibility of controversial issues, at a community hearing Wednesday evening to advocate for greater transparency and accountability in the University of Chicago Police Department (UCPD).

Held at the Experimental Station, the event was moderated by Jamie Kalven of the Invisible Institute. Community members were invited to share opinions about the UCPD in an open mic format. Several local elected officials were in attendance, including local alderman Leslie Hairston. Over a hundred people attended the event.

Community members of various ages and affiliations spoke about the UCPD, alleging racial bias. Several black students from the University alleged that racist treatment from the UCPD has been a burden on their college experience.

“Even if you’re walking out of the library, you gotta make sure you’re wearing a book bag,” one of the attendees said. “It’s like, me going through all these thoughts is detrimental to my college experience. Even subconsciously it’s killing my college experience when there are white students who don’t have to deal with this. And I worked just as hard as them to get here.”

Hyde Park resident Jamel Triggs, who has been involved with the CEP for several months, said that the UCPD should stop discriminating against and start collaborating with the local youth, as they are the future of the community. Triggs works with youth at Blackstone Bicycle Works and is a former U.S. Marine, which he said colors his view of the UCPD.

“UChicago police is essentially a private military, as far as I’m concerned,” he said. “I’ve been over in Afghanistan where you see mercenaries contracted by the government to do things that the United States will not and cannot do. Essentially the university did the same thing—on a smaller scale, but it’s still wrong.”

“University police departments do not have to disclose information in the same way that the city police do. Whether or not that’s a good thing or a bad thing—that’s for you all to decide. That’s what we’re discussing here today. It’s not that this can’t be changed. Police departments should respond to the kind of law enforcement that the communities they serve require,” Nimocks said.

In regards to the future, Alderman Hairston suggested a way to transition the discussion into action. Hairston proposed convening an ad hoc committee to make recommendations to the University in order to leverage change.

Coalition founder and fourth-year Ava Benezra said she intends to join Hairston’s proposed committee to promote transparency and accountability in the UCPD.

“I think...organizing specifically around issues of legislative change is a really good possibility for us right now,” she said. “It shouldn’t be legal for a private police force with such a public function to have such narrow accountability…. The next step for us will be making sure that that happens.”

CEP leader Tristan Bock-Hughes said the community’s comments resonated most with him.

“For me, the most important part that came out of tonight was how much of an understanding the community has about how intentional this racist policing is,” he said. “I’ve seen how people can sort of just shut off to this kind of stuff, and it’s very cool to see that there are people in this community who are still able to have a very solid understanding that this isn’t right.”