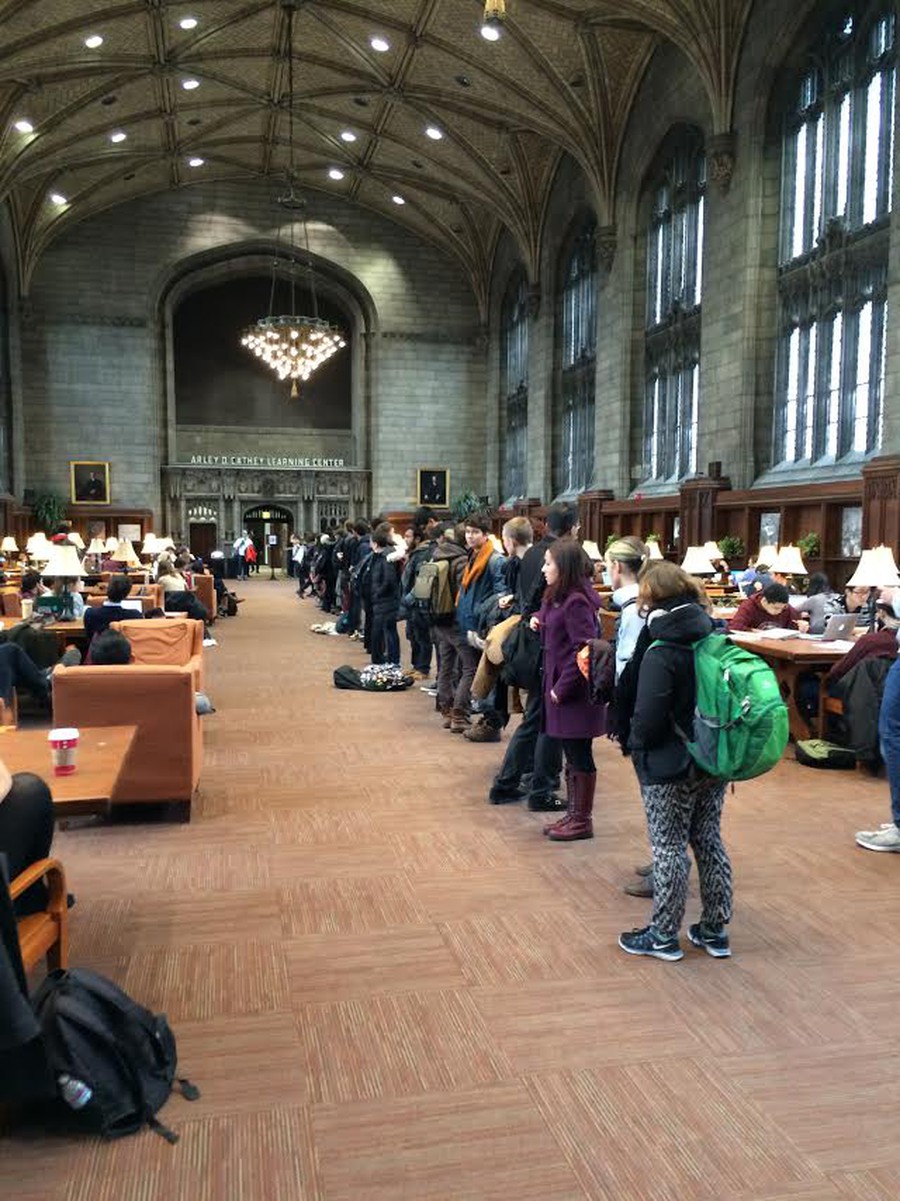 Students continued to rally against racial insensitivity on campus this week. A petition that began circulating last weekend now has more than 2,000 signatures. The hacking of a student’s Facebook account Tuesday evening has led to a federal investigation; a subsequent movement on Twitter resulted in 1,500 related Tweets; and a protest took place Wednesday afternoon in the middle of the Harper Reading Room.

These events come days after third-year Vincente Perez and fourth-year Jaime Sanchez presented the University administration with a petition to “address the culture of racial intolerance” at the University of Chicago. The petition, which had 2,175 signatures as of early Friday morning, was precipitated by racially charged Halloween costumes of lower-class Mexican gangsters worn by a few students.

On Tuesday, the Facebook account of first-year Derek Caquelin was allegedly hacked by the UChicago Electronic Army. The hacker posted a Facebook status on Caquelin’s account that contained a racial slur and a threat to commit sexual assault, and also named Perez as a target for a future attack. “Vincente you are next. None of your profiles are safe. This is the beginning of our rape season,” the message read in part.

In an e-mail to the University, President Robert Zimmer condemned the Facebook post as hate speech, and said that the University is pursuing a federal investigation of the incident, and would pursue criminal prosecution of the individual behind it. “A message with hateful and abhorrent attacks on members of our community was posted. This is unacceptable and violates our core values…. An investigation is underway with the help of federal law enforcement agencies and third-party website providers to see if we can determine who posted the message,” Zimmer wrote in the e-mail.

Joan Hyde, the media coordinator for the Chicago FBI Office, declined to comment as to whether the FBI is currently involved in the case.

Perez and Sanchez said they did not find Zimmer’s response to be satisfactory, on the grounds that it responded to an isolated incident of racism as opposed to a larger campus culture that abets similar behavior.

“Zimmer’s e-mail was reactionary at best, in the sense that it was only a response to personal attacks on students. It was not a response to an entire culture of intolerance. In this sense, the e-mail says that it takes an instance of someone being seriously threatened for the University to respond to this issue at all,” Sanchez said.

On Wednesday, more than 50 protesters, led by Perez and Sanchez, marched through the Reading Room chanting, “We are here.” Perez said they chose Harper as the location because it symbolizes how institutionalized racism impedes student learning.

“I think that our message was powerful and clear and was conveyed by the theme of absolute disruption. We intended to bring attention to the culture of intolerance at the University of Chicago,” Perez said.

The protesters entered the reading room chanting before stopping in a single-file line. They read comments from the signers of the petition aloud; the comments addressed concerns including frustration with the University of Chicago Police Department (UCPD), allegations of inadequate University resources for students who are children of first-generation immigrants, and the “academic disenfranchisement” inherent in the experience of being a minority student at the University. As protesters left, several students in the library applauded.

Students who witnessed the protest had mixed feelings. Second-year Edward Huh said that he thought that the message of the protest was somewhat muddled, since they did not discuss the specific actions they wanted. “I get that they’re showing discontent, but it was not completely clear as to what they were fighting for. It was like a Sosc paper with no thesis,” Huh said.

Third-year Sean Gasiorowski, however, said that the symbolism of the protest was clear. “I understand the slogan of ‘We Are Here,’ as well as the choice of Harper. The protesters intended to represent the silence of people who aren’t or are unable to actively speak up about discrimination,” he said.

The demonstration was shared on social media via the hashtag #liabilityofthemind, which was created to highlight experiences of all marginalized students on campus. Content shared on Twitter with the hashtag not only addressed recent incidents but also recounted previous instances of discrimination and intolerance at the University.

The hashtag, a play on the University’s slogan “life of the mind,” started trending on Twitter in Chicago after Tuesday’s Facebook hacking. It was included in more than 300 original Tweets and retweeted multiple times, culminating in 1,500 total Tweets with the hashtag.

President Zimmer said in a previously scheduled interview with The Maroon on Tuesday before the hacking surfaced that the administration is preparing to create a new administrative position through the office of the provost charged with promoting “diversity and inclusion.” Creation of this position, Zimmer said, is not a response to recent events and has been in the works for some time. Zimmer did not explicitly state what the job description of the new administrator would be.

Perez said that he finds Zimmer’s promise to create a new administrative position to promote diversity and inclusion well-intentioned, but it falls short of a comprehensive solution to student grievances.

“Small initiatives certainly help, but the addition of one [administrative] position is not going to help. What we need is for the University to create a campus climate survey, as outlined in our petition. Every time an act of discrimination happens on campus, such as what happened on Halloween, it goes by and nobody notices. A survey which collects data on these types of incidents would be more comprehensive,” Perez said.

Students were not the only ones reacting to the incidents: 41 faculty members signed a petition addressed to Zimmer and Provost Eric D. Isaacs and written by Tianna S. Paschel, an assistant professor of political science at the University, commending the student protesters and “demand[ing] a meeting between Provost Eric D. Isaacs and faculty representatives from the Center for the Study of Race, Politics, and Culture (CSRPC) to discuss a long-term plan around these issues [of race relations].”

Paschel said that the intent of the letter was to use faculty power to help the student protesters achieve tangible change.

“We as faculty felt like there needed to be more than just a symbolic response,” she said. “We decided to support students in a way that the administration could listen exactly to the demands of students, and have a real conversation around what’s actually feasible and what isn’t.”

Professor Stephan Palmié, the chair of the anthropology department at the University, said that he signed both documents because of his desire to see University policy address the systematic racial issues present on campus.

“It’s really obvious that it’s time for the University to put some kind of systematic policy in place to address these kinds of issues. Every other year, it seems like some kind of incident similar to what happened on Halloween happens at the University, and it is dealt with on a piecemeal basis. The official response is always that this is some kind of aberration by a misguided collection of students. That is not so,” Palmié said.

On Thursday afternoon, a letter by John Boyer, dean of students in the College, and Karen Warren Coleman, vice president for Campus Life and Student Services, was posted to the Campus and Student Life website. The letter referred to the hacking incident as “part of a larger pattern,” and said that the University would work with Perez, Sanchez, and other students to “improve the campus climate.”

In the previously mentioned interview with The Maroon, Zimmer said that he beliees that fostering diversity at the University is essential to creating an environment of academic inquiry.

He added that diversity, in and of itself, is an essential feature of student life. “How can you talk about yourself as the place which takes serious inquiry as the highest value if you’re not actually a community that has that kind of diversity built in to it?” Zimmer said.

Following the Wednesday protest, Sanchez said that he and the other demonstrators are continuing to discuss their petition with University representatives. He was encouraged that the letter showed that “the [administration] would like to work with us,” but cautioned that “no dates are guaranteed.”

Sanchez said that the protesters won’t stop until they see substantive action: “We want complete transparency, and a real timeline so that we know how to plan ahead. We want to know who [from the University] will be at the table, because we’re the ones who brought these issues up, and we’re the ones who are suffering.”