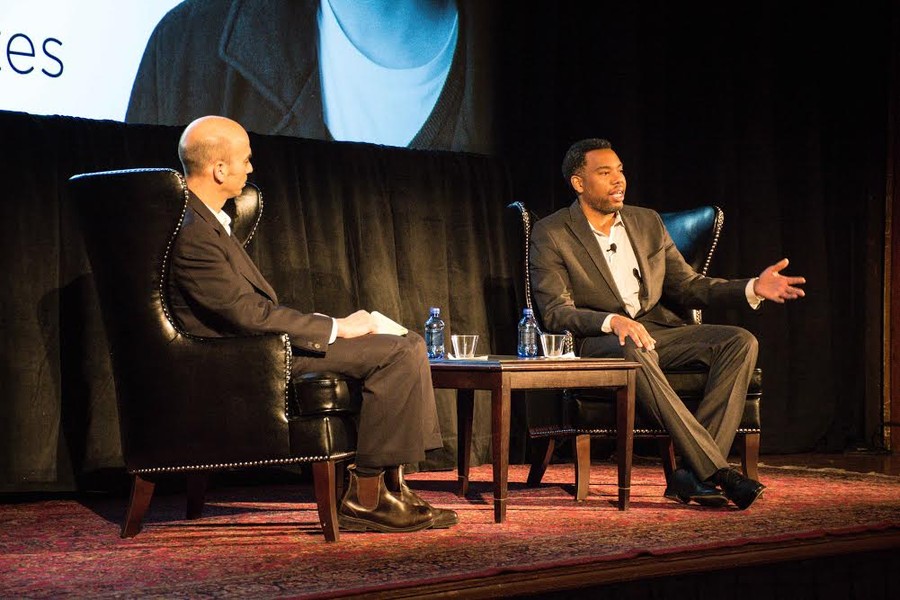 Ta-Nehisi Coates, author and journalist for The Atlantic, explained and defended his June 2014 article “The Case for Reparations” in front of a packed Assembly Hall in International House on Thursday evening. The talk was moderated by James Bennet, editor-in-chief of The Atlantic.

Coates’s 16,000-word article argued that black Americans still face the challenges that the legacies of slavery, Jim Crow, and segregation have left behind, and thus that they are entitled to reparations from the government. During his talk, Coates discussed his motives for writing the piece, the controversy surrounding it, and where he hopes the dialogue will go in the future. He also put his article in historical context, saying the case for reparations has been slowly built over hundreds of years.

The talk opened with a nine-minute Atlantic video about Chicago’s North Lawndale neighborhood, which served as the backdrop for Coates’s piece. The video describes the discrimination—which was held up in court—that black residents faced as they tried to purchase homes in the West Side neighborhood in the 1950s. Today, North Lawndale is one of the poorest neighborhoods in Chicago, with an 18 percent unemployment rate and a 42 percent poverty rate. Coates used this neighborhood as an example of why reparations are necessary.

Coates said the city of Chicago was such a prominent part of his article because of the depth and breadth of available data.

“Chicago is one of the most studied cities in America...so [if] you’re going to have to make a very, very difficult argument for reparations, and most people are really not going to want to hear that, you really need to have as much data as you possibly can. And Chicago is a wealth of sociological data,” Coates said.

A large part of the question-and-answer session was devoted to Coates’s opinion of the reaction to his article.

“For me, the most gratifying has been African Americans who are above the age of 60 or so, because they have direct experience with this,” he said. “You get letters from people’s children, from the people themselves, and they say, ‘That was me.’”

Bennet asked Coates’s opinion on a common counter-argument to his article: that people should “pull themselves up by their bootstraps.” Coates argued that to expect a group of people who have been traditionally oppressed to do this is unreasonable.

“If you accept that black people are human, you have to accept that they can’t be superhuman,” he said. “When you get to the policy level…I think you forgo the right to stand up and tell people that, ‘Listen, it’s up to you...’ because you’re representative of why they gotta pull up their pants in the first place.”

An audience member asked Coates if he believed that other groups, such as Native Americans, should have been included in Coates’s call for reparations as well. Coates said that his article was far from the beginning of this conversation—about whether the case for reparations may extend beyond African Americans—and that he does not want his article to be the end.

“I hope this isn’t the last article about reparations. It shouldn’t be the last word. [But] I think that this history in itself is worthy of this examination by itself.”