As part of nationwide movement, campus remembers the disabled 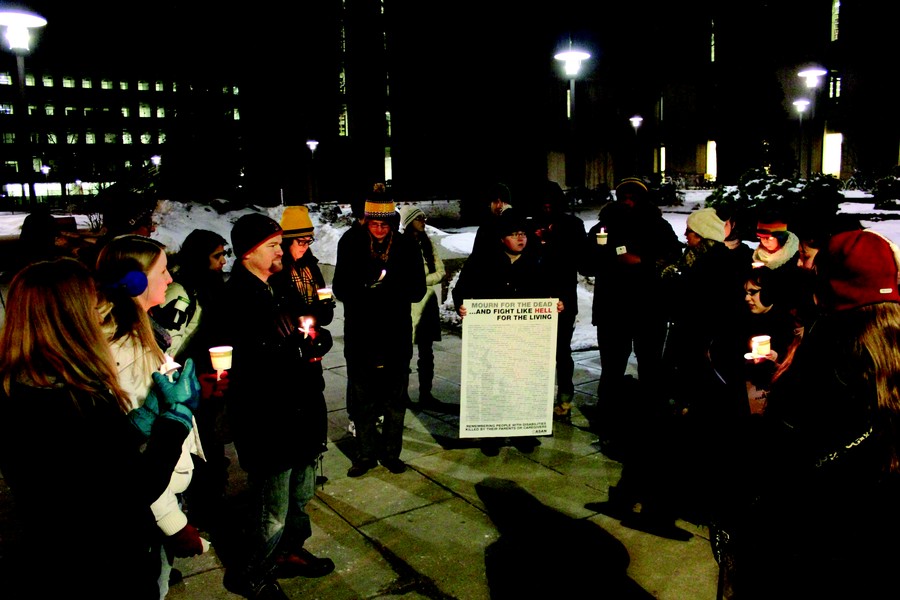 30 people stood at a candlelight vigil outside the Regenstein Library to remember disabled people killed by their caregivers Sunday evening.

First-year Steph Ban, who is vice president of the Organization for Students with Disabilities at UChicago (OSD), offered introductory remarks about togetherness in the face of adversity, especially in regards to the media, which, she claims, often shows bias in its coverage of the issue. Ban concluded her remarks with a slogan echoed by placards carried by fellow mourners: “Mourn the dead and fight like hell for the living.”

Over the past 15 years, 72 people have been murdered by their caregivers, according to the website of the Autistic Self Advocacy Network (ASAN), the organizing body for these vigils. ASAN asserts that the media’s coverage has tended to portray these murders as a response to the violence of people on the autism spectrum.

After Ban’s remarks, a list of names of the dead was passed around and read aloud. The list was compiled by ASAN communications and publications coordinator Ianthe Belisle Dempsey, who also attended the vigil. It included the victims’ names, ages and dates of death, as well as methods of execution, which Ban did not read aloud.

The vigil was a part of a nationwide series of March 1 remembrance ceremonies sponsored by the ASAN that occurred all over the world from Tempe, AZ to Budapest, Hungary.

Ban, a self-identified disabled person, was inspired in a meeting to host the vigil. “I had the epiphany that what would be really beneficial for the community would be to have [a vigil] here.” She added, “We’re obviously a well-established university. We have, I don’t want to say a sizable disability community, but we have a strong one, and we have support from [members of the administration].”

The Organization for Students with Disabilities is a RSO geared toward making the University a more accessible place for people with disabilities. “The goal is not disability awareness,” Ban said. “It’s acceptance.”

Ban decided to host the vigil at the University as it is an established institution in Chicago.

“[When] I was thinking about organizing this I looked online and I found that one of the goals of the people who organized the vigils on a national and international level was to hold the vigils in politicized places and places of power and that really sealed the deal for me,” she said. “What more of a place of power than one of the old, elite institutions?”