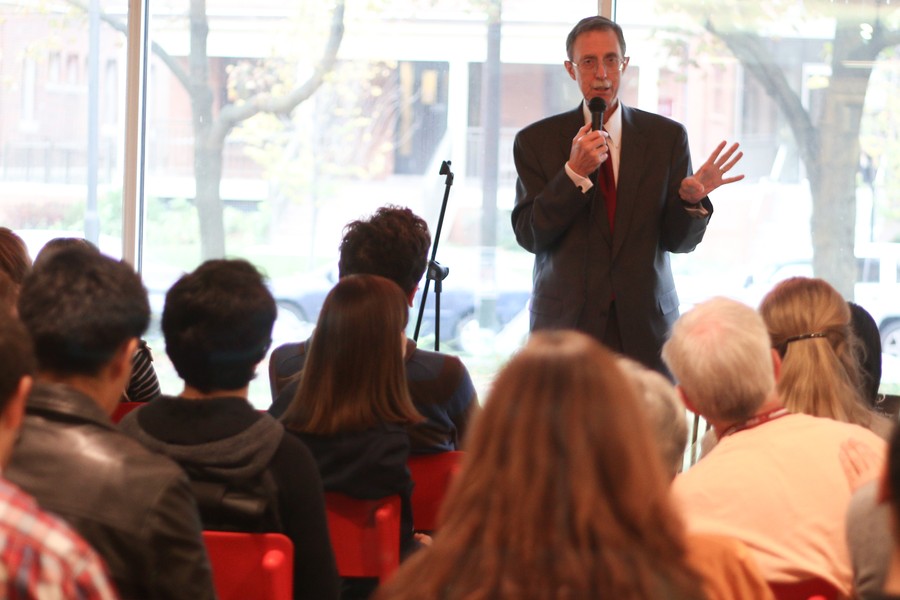 Dean of the College, John Boyer, gave two presentations on Friday at the Seminary Co-Op Bookstore.  The presentations focused on his recently released book, The University of Chicago: A History. Boyer took time after each presentation to sign books and speak with audience members.

Boyer said that the book is based on his series of shorter books, or monographs, on the history of the University. Dean Boyer has completed one of these monographs every summer since 1996.

“I did what I suppose came naturally to a historian and to a scholar of history, and I decided to begin to look into some of these policy issues from an historical perspective, it was my sense that surely this can’t be the first time that we were facing x—and you can fill in what x is— and perhaps I can have a better understanding of what we should be doing in the present and the future if I had any understanding of where we had been in the past,” Boyer said.

Boyer then shared what he thought was an interesting finding from his research: a historical explanation for the “seriousness” of the student body at the College. This seriousness, according to Boyer, is partially due to the fact that the first student body, compared to that of East Coast universities, was unusually old and economically diverse.  The student body was further distinguished by the university’s support of coeducation.

After the presentation, Boyer answered questions from audience members, who probed him about the history of many issues the administration currently faces.

One audience member asked about the history of donors making requests of the University along with their donations. Boyer replied that this practice became more common in the 1970s.

“I don’t think there is a problem with taking money with strings attached. It depends on what the strings are and who’s holding those strings. You can’t let donors drive faculty research, nor should you let donors set the ideological agenda of the University,” Boyer said.

The book is available at University bookstore and the Seminary Co-Op. The historical monographs that inspired the book are available for free on the College website.