The week culminated in a rally outside of Levi Hall in which protestors accused the administration of racial profiling, over-policing, and lack of transparency. 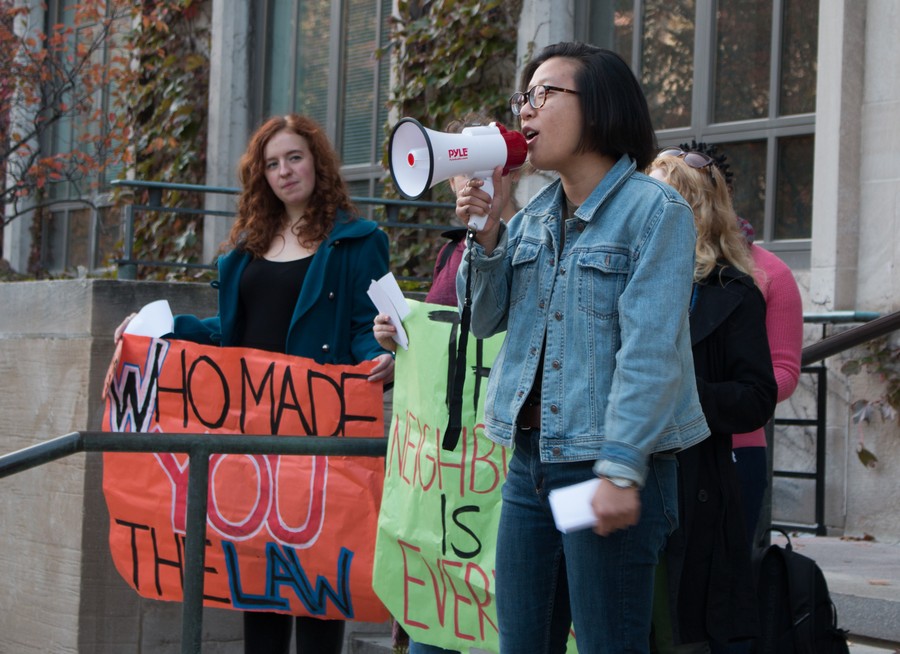 Alex Ding rallies the crowd after coming back from delivering the protestors' demands. Provost Isaacs, whom they were attempting to speak to, was not in his office at that time. 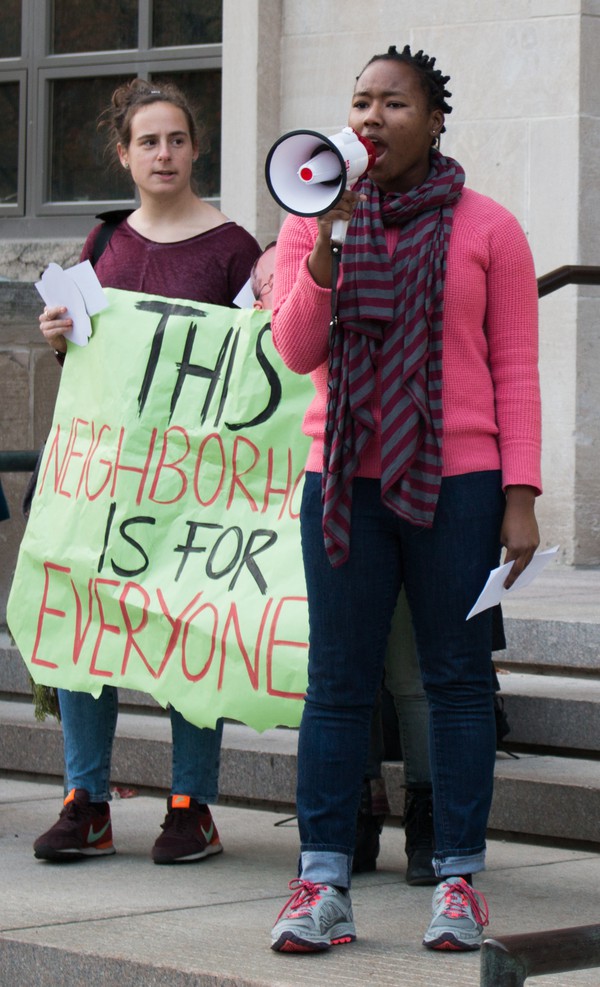 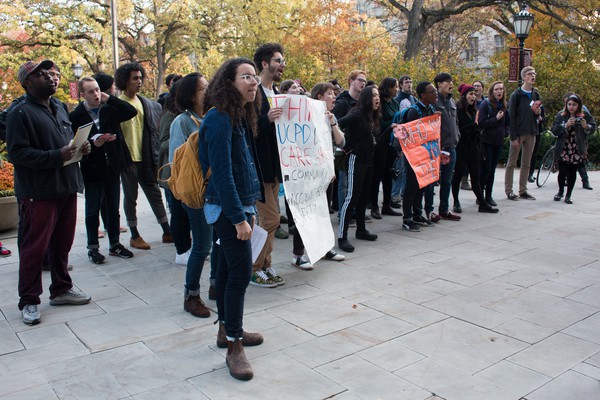 The crowd chants, "This is what democracy looks like."

The Campaign for Equitable Policing (CEP) organized a week of action last week in order to promote awareness about policing on campus and in the surrounding community.

CEP is an activist group that is a part of the Southside Solidarity Network (SSN), which organizes to promote social justice on the South Side. CEP’s principal demand was to meet with Provost Eric Isaacs to discuss the Independent Review Committee (IRC), which reviews complaints against the University of Chicago Police Department (UCPD). Three events were held throughout the week, culminating in a rally outside of Levi Hall on Friday.

On Friday, approximately 50 protesters participated in the direct action rally. Carrying signs accusing the administration of racial profiling, over-policing, and a lack of transparency, the protestors marched from the Booth School of Business to Levi Hall.

The protesters shouted numerous chants that echoed the messages on their signs, such as “Who made you the law? No one!” and “No justice, no peace, no racist police.”

First-year Rahmel Robinson shared a personal story during the rally. Earlier this year, he was confronted by a security guard and was told that he should not be on campus. Robinson believes that he was racially profiled.

“I wasn’t doing anything wrong when I was told to leave the quad, it was just a matter of me being thought to be a community member because of my urban clothing and the fact that I was black. Obviously, the people at the bottom of the totem pole are advised by the people at the top to ostracize community members and be…selective about who is allowed to walk across the quad. If I was actually a community member and I was white, they would’ve never thought that I wasn’t a part of the College, and I wouldn’t have been kicked out,” Robinson said in an email.

Second-year Cosmo Albrecht, CEP and College Council member, noted that the week of action was partially framed in response to a recent change in one of SG’s committees, the IRC. The change was announced at the October 1 SG meeting.

The IRC has always been a provostial committee comprised of students, staff, and community members. In the past, students have been selected by standard committee applications sent to SG and then approved or rejected by the Provost. This year, members were to be selected by Dean of Students Michele Rasmussen in Campus and Student Life (CSL). In past years, CSL passed this responsibility onto SG.

Third-year Sofia Butnaru, co-coordinator for CEP, noted that that if the administration selects the IRC members, the IRC will no longer be independent. CEP wants Isaacs to instate an independent community oversight board to review complaints against the UCPD. Second-year Alex Ding, co-coordinator of CEP, added that the organization does not want to abolish the new iteration of the IRC entirely, nor do they want it to return to its former state.  The new board would be comprised of independently selected students and community members and would have expanded powers compared to the original IRC, which was able to make suggestions but could not implement them.

CEP reiterated several times during the week of action that the UCPD’s jurisdiction extends far beyond campus boundaries. The University of Chicago Police Department is one of the largest private police forces in the country and operates between East 37th and 64th Streets to the north and south and South Lake Shore Drive and South Cottage Grove Avenue to the east and west. The UCPD serves in a supportive role to the Chicago Police Department (CPD), the area’s primary policing agency, according to the UCPD website.

In total, some 65,000 residents live in the UCPD patrol area. Of these, 50,000 are not affiliated with the University, according to CEP.

According to the UCPD website, specific laws are in place that allow universities in Illinois to hire private police forces. In addition, city ordinances protect the UCPD’s ability to operate as “peace officers” beyond campus borders.

On Wednesday, CEP hosted “Know Your Rights,” a workshop that brought Liz Homsy, a criminal justice lawyer, to campus. At the workshop, the attendees, comprised of mostly students and some community members, were informed about what their legal rights are during an interaction with a police officer. Approximately 40 people attended the workshop.

The next day, CEP hosted a teach-in that shared information about policing on campus and in Chicago in general. The event began with 25 minutes of “silent discussion,” during which students were encouraged to respond to facts and stories posted around the room using sticky notes.