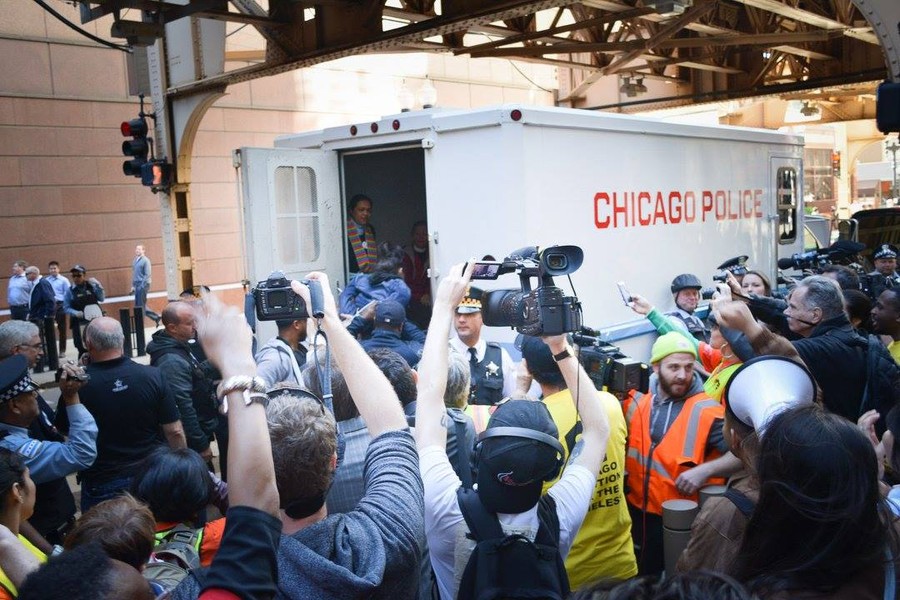 Forty-two protesters, including four University of Chicago students and two alumni, were arrested at a protest at the Chicago Board of Trade on Monday. The protest, organized by a statewide coalition called Fair Economy Illinois (FEI), called for higher taxes on the rich and a "LaSalle Street Tax" on corporations to balance Illinois’s budget.

Hundreds of protestors representing organizations across Chicago and Illinois participated. Carrying signs that read “Students’ needs, not Corporate Greed” and “Fund Education, Tax Big Corporations,” the protesters marched from the Thompson Center to the Chicago Board of Trade, where they blocked entrances and staged a die-in.

Southside Solidarity Network (SSN) and UChicago Climate Action Network (UCAN) were two of the organizations that sent protesters. Both groups are part of IIRON, an Illinois organization that promotes economic equality and social justice. IIRON is a member organization of FEI.

According to second-year Anna Wood, an organizer with SSN, 700 people participated in the march, including social service providers, clergy members, and other South Side community members.

“[Protesters] spoke about how the [budget] cuts would affect them and the vulnerable people of the state. Then we marched in four groups to surround each entrance of the Chicago Board of Trade, where 64 activists blocked all doors of the building and temporarily shut down access to it before police began to remove them,” Wood wrote in an e-mail.

Police began making arrests shortly before noon, when the protest was set to end. The arrests attracted local news and social media attention. 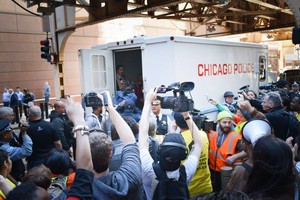 Third-year Brooke Adams was one of the four UChicago students arrested. An organizer for UCAN, she had helped plan the demonstration a month prior.

Adams said that she always knew there was a possibility she would get arrested if she blocked the entrances. “None of us were going to be taken seriously unless people knew that we were willing to take a risk…People were willing to risk their bodies in order to gain some kind of power.”

She, along with 22 others, blocked one entrance to the Chicago Board of Trade by sitting inside revolving doors and in front of accessible entrances. When the police made arrests, the many protesters opted to go limp and be carried out by police officers rather than actively struggling or walking out themselves.

“The idea there was that first we would shut down the building...but we would also cause financial harm…and get carried out by the police for a strong visual image,” Adams said.

According to Wood, people were charged with offenses ranging from trespassing to resisting arrest. Adams herself spent approximately eight hours in jail in the Chicago Police Control Detention on the corner of 18th Street and State Street. She was charged with criminal trespassing, obstructing a police officer, and disorderly conduct in public. Adams also noted that she had not been in contact with the University at all about her arrest.

“I was pretty angry about being constantly told that as a young person, as a woman, you have to be realistic, and that you have to take small steps to make very deliberate political change. That seemed to me like a narrative that was keeping us from making any real change,” Adams said.