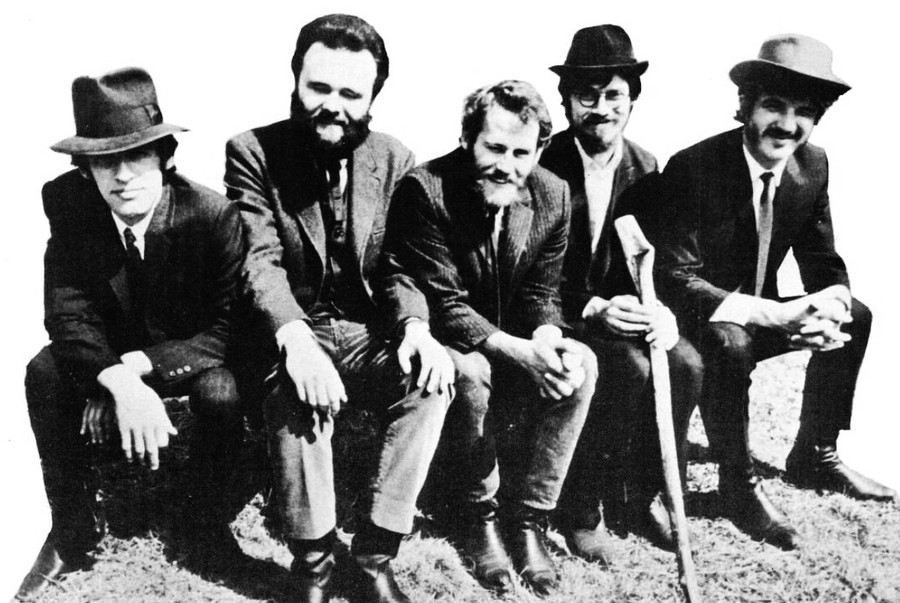 A recently-released recording of a long-ago Mandel Hall concert conjures up an obscure bit of UChicago cultural history―the University’s small but vital role supporting one of the great rock bands during its twilight years. The story is worth remembering if only because, as the new CD demonstrates, the music the group played on campus was really good.

During the late ’60s/early ’70s apex of classic rock, the greatest American rock band was a band called The Band. Maybe it still is: Bob Dylan’s latest Bootleg Series album package calls The Band “the greatest rock band North America ever produced.” Even in that heyday of the Beatles, the Rolling Stones, Led Zeppelin, Janis Joplin and Jimi Hendrix, The Band was huge. Not only did they play Woodstock, but Woodstock’s promoters paid homage to The Band by naming the epochal event after their hometown (the musicians lived around Woodstock, NY while the 1969 concert happened 43 miles southwest, near Bethel).

This was the backup band with which Dylan went electric, getting booed around the world on their seminal 1966 tour immortalized in D.A. Pennebaker’s Don’t Look Back. Afterward, in Woodstock, The Band and Dylan recorded the legendary Basement Tapes, spawning the genre now called “Americana” or “roots rock.” When The Band finally got around to releasing their own albums they made the cover of Time—back when that still meant something. In wan efforts to emulate the Band’s sound, Eric Clapton broke up his ‘60s power-rock group Cream, the Grateful Dead abandoned acid rock and the Beatles worked up a Band song. The Band were so respected that when Saturday Night Live booked them as a musical guest, Lorne Michaels let them play four songs.

But by 1976 The Band had disbanded. With record sales faltering, their guitar player/songwriter Robbie Robertson decided to go out with a bang. He hired Martin Scorsese to film their farewell concert on Thanksgiving at Winterland in San Francisco. Scorsese’s The Last Waltz remains the greatest-ever “rockumentary,” teeming with top-tier stars like Clapton, Dylan, Van Morrison, Neil Young, and Joni Mitchell to Chicago blues legend Muddy Waters, all reveling in their last chance to play with such a great group. Later The Band got inducted, first round, into the Rock Hall of Fame. Today their portrait hangs as the only decor in David Chang’s trendy Manhattan restaurant Momofoku―Chang says The Band inspires his staff.

After that high-profile farewell show, Robertson cashed his songwriter-royalty checks and tabulated box office grosses with his buddy Scorsese (the two actually lived together). But that left the other four guys in The Band fending for themselves, journeymen whose only marketable skill was their world-class musicianship.

All this is standard-issue rock history. What is less known is that, a few years after The Band broke up, the University of Chicago played a central role in a 1980s reboot of the group, now documented on a CD recorded at Mandel Hall called And Then There Were Four (All-Access Records, 2015).

As soon as the four Band survivors could get away with it, they tiptoed back on the road. They debuted their reunion in Japan, playing to the eager fan base polite enough not to ask awkward questions about following up a farewell spectacle as lofty as The Last Waltz with . . . more concerts. Slipping back stateside, they put on a spirited show that filled up Chicago’s Auditorium Theater. Two nights later—Sunday, November 6, 1983—The Band played the lively MAB concert at Mandel Hall included on the new album. 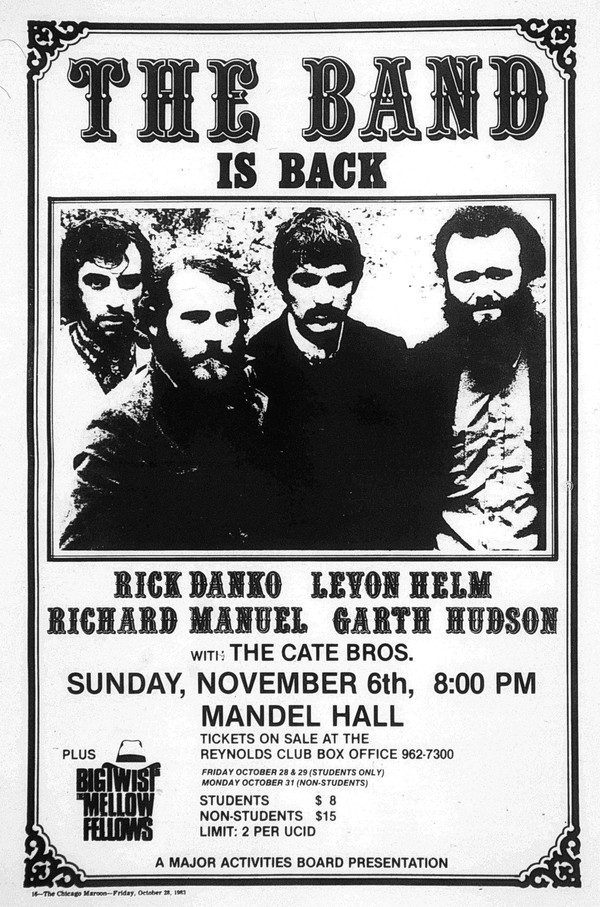 A promotional poster for the MAB concert which ran in the Friday, October 28, 1983 issue of the Maroon.

The Doc screening and the Ida show

To understand how The Band reunion tour ended up in Reynolds Club, we need to back up a few years. In the late ‘70s/early 80’s era after disco and before hip-hop, cool college students listened to punk and new wave. WHPK kept the Sex Pistols, Elvis Costello, and the Talking Heads in heavy rotation. MAB somehow managed to book both the Ramones and U2 playing I-House. And the climax of every Chicago frat party back then came when someone blasted the B-52s “Rock Lobster.” (It was wild to dance to… or maybe you just had to be there.)

By that point The Band was an extinct dinosaur. Yet then as now, UChicago harbored plenty of musical paleontologists. Covert Band fans lurked all over the quads; that became clear one night in 1979 when we all showed up at Mandel Hall for a special Doc Films screening of Scorsese’s The Last Waltz. That night, the biggest concert venue on campus actually filled up for a movie.

Over the last four decades I’ve watched The Last Waltz in theaters a couple of dozen of times, in several states and on two continents. But I never saw so exuberant and boisterous a Last Waltz screening as that night in Mandel Hall. When the Muddy Waters scene came on, all the stomping and pounding made me ponder the architectural integrity of Mandel’s balcony.

That Last Waltz screening was a prelude for UChicago’s next big Band event. On March 4, 1983―remember, this is still before The Band’s Japan reunion―MAB put on the intimate concert of a lifetime, an unforgettable duo acoustic concert at Ida Noyes by two of The Band’s singers, Levon Helm and Rick Danko. (Both are now dead.) The show was so transcendent that after it ended no one would leave. We stomped and screamed but refused to go. Finally, some hapless MAB volunteer cajoled Danko and Helm back for an extra encore.

Which brings us to November 1983, when The Band’s reunion tour pulled into Reynolds Club. In the Loop the Friday before for their Auditorium Theater gig, the guys must have figured hey, what the hell―let’s do a college show.

That Mandel Hall concert, though not as moving as the Ida Noyes Helm/Danko duet, was quite good. But don’t take my word for it. You can hear the show on the new And Then There Were Four album, a crisp recording from an FM broadcast. The sound quality is so clear you can hear me (or some yahoo who sounds like me) yelling “wooo!”

The CD liner notes ignore the fact that The Band filled out their lineup that night with a bunch of sidemen called the Cate Brothers. The extra musicians thicken The Band’s sound even as they sound thinner without the inimitable Robbie Robertson on guitar. The CD showcases The Band’s greatest hits while offering twists, like a Garth Hudson accordion solo on “Long Black Veil.”

I like the rarities—Richard Manuel singing a verse of “The Weight,” for example, and the cover of the blues standard “Milk Cow Boogie.” They even play the uptempo “Java Blues,” a Danko song that anticipated the Starbucks coffee boom still a decade or so away (“Down in Bolivia the people are insane/They want as much for java as they do for cocaine”). The Band nerds appreciate the Mandel Hall recording because Manuel, one of the undisputed great rock vocalists, sings the first line of his signature song “I Shall Be Released” in his classic falsetto before giving up and reverting to his husky baritone.

No matter. Most of us in the audience that night had read Herodotus, Thucydides, or Gibbon in the Core. As much as anyone, a UChicago crowd can appreciate that history is nuanced, ambiguous, and even, sometimes, a matter of opinion.