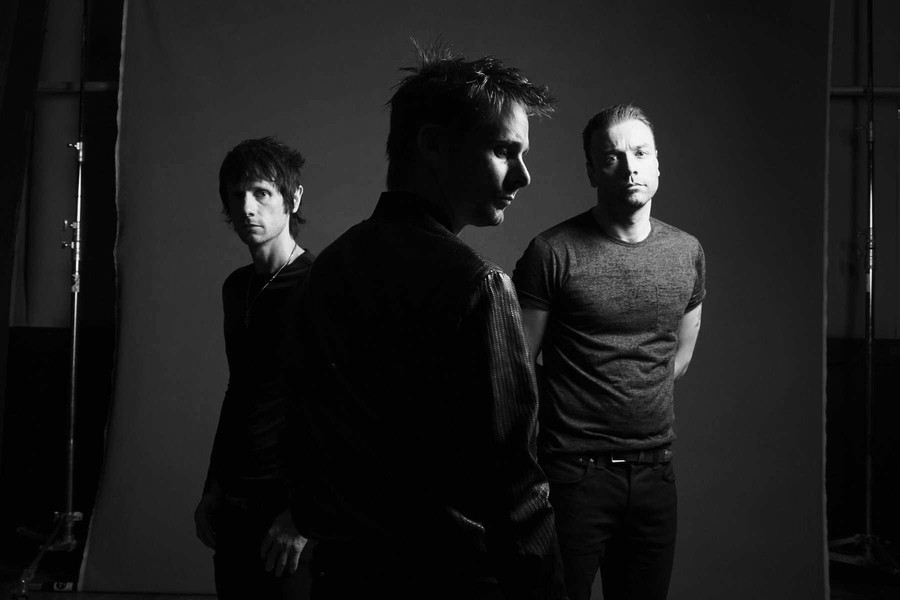 Muse’s show at the United Center is essentially more of the same, plus a cyborg or two.

I didn’t really seek out music for a lot of my childhood; the music that made it into my long-term memory was hammered in there by my parents. So when I became a bona fide fan of Muse in ninth grade, it was both a heartening development in my tastes—I had found music I liked, independent of my parents—and an extension of what my parents liked (’70s stadium rock). I didn’t have any investment in saving face or developing “cred,” so I didn’t attach any embarrassment to my love of what was, to me, a great band.

Fast forward to present day: when I got a chance to cover Muse’s stadium show supporting its new album, Drones, I couldn’t help but be interested. My interests have shifted and my tastes have changed, but, nevertheless, Muse remains a meaningful wrinkle in my musical history, one that I felt eager to reinvestigate.

After all, one of the first concerts I went to was Muse in the fall of 2010, when I saw the band headline the Austin City Limits Music Festival. I went with my father. At the time, I was almost certain that my dad would love Muse. His favorite childhood bands (U2 and Def Leppard) did the same thing that Muse does: they had big choruses, histrionic vocals, heavy-metal riffs, and most of all, no shame.

Of course, he wasn’t nearly as enthused as I thought he’d be, but I just took the loss as a generation gap—as another instance of parents just “not getting it.” Besides, I was distracted by Matt Bellamy blatantly aping Freddie Mercury while also holding a twin-necked guitar as the stage exploded behind him. That was something I missed, and despite all my inclinations otherwise, I was looking forward to a stadium show from the band that made me love prog-pop (if just for a bit).

Going into the United Center a week ago, though, I was struck by a feeling unfamiliar to my relationship with live Muse: skepticism. Skepticism at the Bud Light being sold at every corner, at having to go through a literal metal detector to get to will-call, at the guys talking about Benghazi behind me in my seat, at the whole ethos of Muse: at how this entire event felt more like a football game and less like a show. Even though I understand shows—even stadium-sized ones—better than any sport, this felt like a different beast. It felt fake and overblown, even to someone who believes artifice in no way discredits art.

As a string of men dressed up as cyborg soldiers marched out around the stadium, I instinctively rolled my eyes. Muse marched out as unabashedly as ever, ripping into their first single from Drones, “Dead Inside.” Not long after, images of an antagonistic female cyborg lit up the banners surrounding the stage, instantly citing a combination of 1984, some video game, and impending cybernetic doom.

As Bellamy strutted around with puppet hands guiding his movements, I wrote quickly in my notebook, “Does Matt Bellamy believe this shit?” and then, almost immediately afterwards, “Does the audience?” As has been repeated over and over again in the press, it’s really weird that this now-middle-aged British guy thinks that he should focus his music on the (no-lie) robot apocalypse. What’s even weirder, though, is that millions go along with it.

Muse undoubtedly knows its reputation. It is intensely goofy, often (read: always) to a fault. Their publicity rarely uses social media or unconventional promotional modes. Muse doesn’t “experiment” very often, and when it does (in “Madness,” one of its biggest pop hits) it’s always truncated or stilted by the confines of familiar forms. In a word: Muse is old.

But from the moment I went up to the United Center to get my ticket from will-call, to when I left the show into the crowd, what struck me most was how much of an event this still managed to seem like, seven years removed from Black Holes and Revelations, the album Muse made its name with. Even the songs I hated (mostly from their new album) received thunderous applause, headbanging, and sing-alongs. It seemed like Muse could only do right; my negative feelings about the spectacle made me feel like I was out of the loop or listening wrong.

This is the part where you go “Why the fuck do you care, dude? Muse is trash, everyone knows that.”

Here’s the thing. I’m definitely not a fan of Muse anymore. But I really wish I were still a fan of Muse. Muse appeals to the part of me that I left behind when I came to UChicago—the part of me that loves big riffs and big statements even when I know they’re reductive and oversimplified. The part that’s content with spectacle for spectacle’s sake. It’s a band that wants to go big, go dumb, and disregard reality, all while creating a sonic fantasyland for the audience to live in.

At its best, Muse serves the same purpose as Coldplay—mild spiritual balm—only adding sci-fi iconography and guitar solos. And I still felt that balm, when the moment was right. For at least an hour of Muse’s performance, as it ran through some of its biggest and best songs, that was my prevailing sentiment—of overcoming adversity through sheer force of will, albeit for only as long as the songs lasted. Even “Madness,” a song I never found to be especially compelling on-record, revealed a potential for intense pathos onstage: the emotion was supplied by the subtle switch mid-song from drum machine to live drums, which dragged my attention in and held it. And for a while, as I was hearing those songs, I was able to convince myself that I still liked Muse, that this concert was where I belonged, that there was something rewarding in its simplicity.

But unfortunately, such a high can only last for so long. No matter how hard I tried to like songs from Drones, they all landed with a thud—the lack of synthesizers, piano riffs, or sympathetic vocals rendered the Drones songs uninspiring. Instead, there was little but guitar, histrionic/faux-operatic vocal acrobatics, and visual pyrotechnics to aid the songs.

Just as Muse at its best performs a near-religious service—music as uncomplicated renewal—Muse at its worst seems exploitative and unintelligent. Even Drones, the title of the latest album, feels nasty—as hundreds die every month from real-life drone strikes in the Middle East, Muse chose to use the term to describe robot soldiers. Then it had the gall to make one song a clipped speech by JFK? Really?

By the end of the show, the faux-revolutionary stance that I had always managed to look past was impossible to ignore. If Muse was sometimes able to use music that made me forget the world, it also made me realize music’s potential for abuse.

Part of why I notice this more now is that they’ve become “political” as time has gone on, making it a more vocal part of their identity. But part of it is also on me: five, six years ago, I didn’t feel like pop music had an “ethics” or a way to disrespect its audience. It was just pop music, something to be listened to and then disposed of when it got boring. There can’t be too much to talk about there, right?

But seeing a balloon coming out of the side of the stadium and encircling the stage—meant to represent a large military drone—it’s not hard to realize that there are ethics, that this does matter, and that “pop” or “rock” are never just that. I have written down in my notes “A few albums ago, this would’ve been a rocket ship,” but that’s not quite right. A few albums ago, there just wouldn’t have been a balloon. The fact that there is now means I can’t give Muse the free pass I used to.