Members of the Campaign Take Shifts Watching Website for Signs of Impending Demolition. 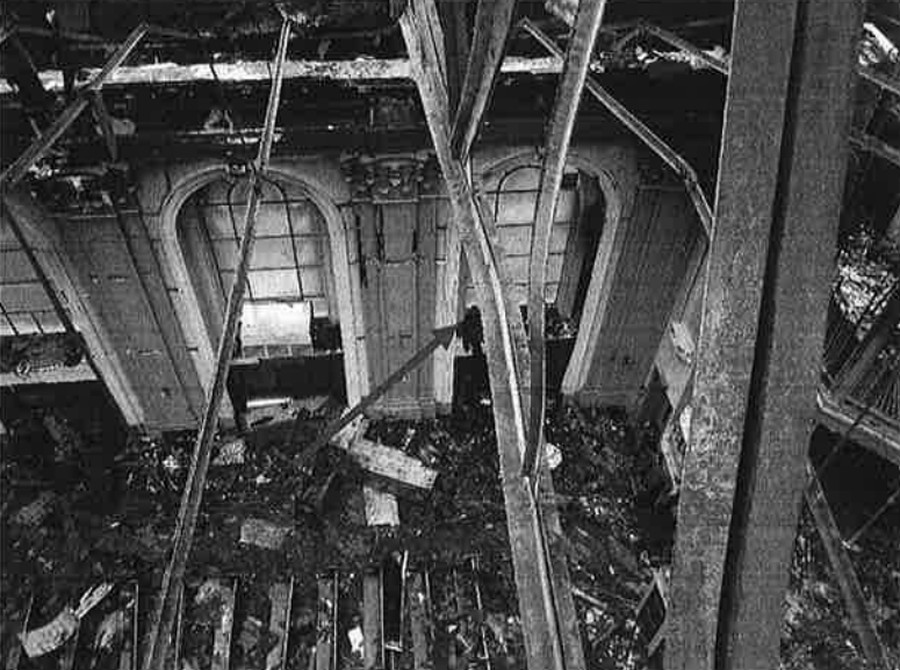 A picture showing damage to the building’s structural supports.

Courtesy of the Department of Buildings Report

Community members have been rallying for the protection of the Shrine of Christ the King church on 64th Street and Woodlawn since the Archdiocese of Chicago filed for the demolition of 92-year-old building in early January.

The Coalition to Save the Shrine, a group of parishioners, neighbors, and preservationists in favor of protecting the church, has received support from national and local organizations including Landmarks Illinois, the Hyde Park Historical Society, and the National Trust for Historic Preservation.

“Support for saving the Shrine extends far beyond the parishioners,” Emily Nielsen, a spokesperson of the Coalition, said. “In fact, most of the people working very hard to save the Shrine are not only not parishioners, but not Catholic.”

The main goal of the Coalition is to delay the demolition and use the extra time to meet with developers, raise funds, and determine alternate solutions. Several of the preservation groups that have voiced their support for the Shrine have sent letters urging the Department of Buildings to allow a one- or two-month delay on granting the demolition permit. Until this permit is issued to the Archdiocese, the Shrine of Christ the King church cannot be demolished. Neither the Archdiocese nor the Coalition members know for certain when the decision to issue a permit might be made.

“Please know the urgency and timeline for this effort have been driven by concerns for safety after the building was deemed to be ‘imminently dangerous and hazardous’ by the City of Chicago,” Susan Burritt, spokesperson for the Archdiocese of Chicago, said. The Archdiocese expressed deep sympathies for the loss of the historic church, and said that they are considering options that would allow the Shrine of Christ the King community to remain in Woodlawn, even if the church itself has to be demolished.

The church, which was known as St. Gelasius until 2003, also faced demolition in the early 2000s. However, the church was saved when it was declared a landmark by the Landmarks Commission, and the Institute of Christ the King was given ownership of the building.

Although it remains a landmark, the Landmarks Commission had to allow the Archdiocese to proceed with demolition plans because the Department of Buildings for the City of Chicago declared the building unsafe in its current state.

The engineering report supporting that finding details the damage from the fire. According to the report, the roof of the building would have to be completely replaced, and many other structural elements would need extensive repairs. The report outlines a plan for temporarily stabilizing the building, but a full repair would be “a significant effort from both a design and construction standpoint.” The Coalition obtained the report from the city through a Freedom of Information Act request.

Until an official decision is made, the Coalition is maintaining an active social media presence at its main site, savetheshrine.org, and on Twitter and Facebook as “savetheshrine.” In addition, they have been running advertisements in local newspapers and picketing on busy street corners to promote awareness of the looming demolition of the landmark. Members of the Coalition have organized shifts to monitor the Department of Buildings website and stay abreast of the permit situation. “Because the building has been deemed ‘dangerous,’ the City does not require notifications to be sent to the Shrine’s neighbors, which means it is up to us to let people know the building is threatened,” Nielsen said.

“Discussions have been and are ongoing with the Archdiocese of Chicago leadership, with whom the Shrine clergy are asking for everyone’s full cooperation, for the best possible solution for the Shrine community’s future,” Shrine of Christ the King Canon Michael Talarico said over e-mail. “Options are being examined and discussed carefully.”