Debate Looks at the Value of Fraternities 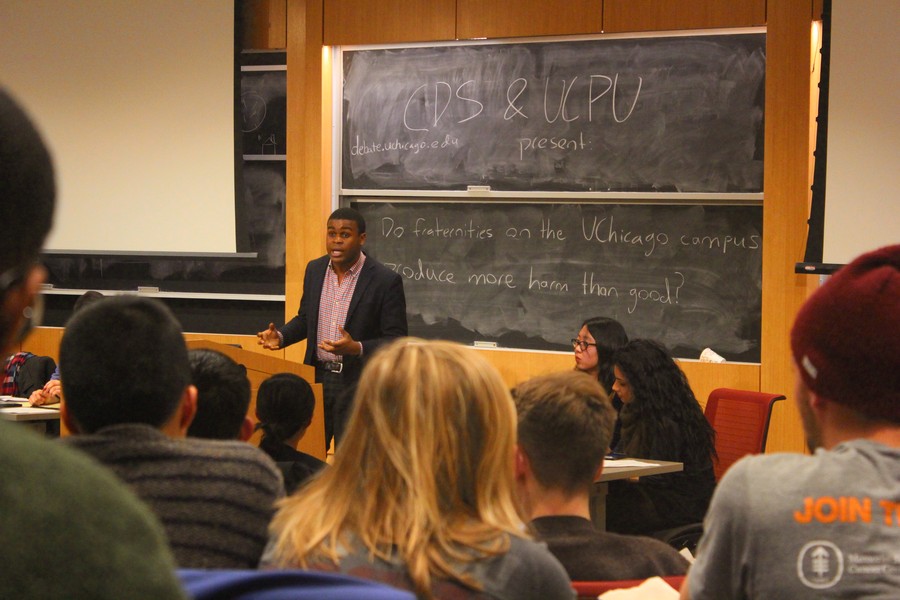 The event was moderated by Eric Greenberg, a second-year student and CDS member, and David Abraham, a third-year student and UCPU member. Debaters were assigned the position they would argue for. First-year Liya Khan and fourth-year Michelle Jiang, both CDS members, defended the presence of fraternities on campus. Third-year CDS member Paul Drexler and Harris School graduate student Osita Nwanevu, previously of the CDS, argued against their presence. Khan was the only debater affiliated with Greek life.

Abraham presented both teams, first introducing the affirmative side, which debated against fraternities, and then the negative, which argued in support of their presence; the negative team received a round of applause from the audience, which was predominantly composed of Greek-affiliated students.

“Most fraternities are garbage,” Nwanevu said, and with that the debate began. Nwanevu, the first of the four debaters to speak, introduced his argument by stating that he believes that UChicago fraternities do more harm than good, and gave four reasons why this is the case.

First, according to Nwanevu, fraternities both at UChicago and at other universities concentrate privilege and practice exclusion. Nwanevu’s second point was that “fraternities here and everywhere are criminal organizations that encourage dangerous, illegal behavior and shield their members from responsibilities.”

Nwanevu went on to argue that fraternities are far too influential and are morally bankrupt in the use of their influence, and that fraternities, even here, have a history of bigotry and misogyny.

To support his claims, Nwanevu drew on instances of racism, sexual assault and general misconduct from various fraternities on campus, such as the leaked AEPi emails. He concluded his argument by asserting that the benefits that fraternities offer the UChicago campus do not outweigh the various issues that they cause.

“We are trying to point out the structural reasons behind why fraternities contribute to these problems on our campus,” he concluded.

“It would be an absolute lie to say that the only place where racism and misogyny exist, the only place where there is fear among minorities, is within fraternities,” Jiang said. She explained that these issues are not endemic to Greek life but to the UChicago community as a whole, and said that eliminating fraternities would by no means eliminate the issues that pervade the UChicago community.

Additionally, Jiang presented the possible consequences of using fraternities as scapegoats, and argued that banning fraternities would simply encourage students to move these accusations to other places, specifically house parties, where they would be harder to address.

Jiang proceeded to question whether the blame should be placed on the University and its refusal to accept accountability—as was made visible through the various sexual assault cases at fraternities this year—rather than on the fraternities.

“Recall that when someone in DU was accused of sexual assault this past fall, the rest of the DU brothers decided to remove the individual from the fraternity,” Jiang said. “A lot of people in fraternities are talking about stuff like this, are dealing with the issues of racism, misogyny, et cetera.”

Jiang concluded by saying that while fraternities may have had problems in the past, they are moving in a positive direction. She reiterated her main point: that these issues, such as racism and misogyny, are not unique to Greek life but are issues that face UChicago as a whole.

Drexler’s rebuttal focused on the centralization of power among fraternities on campus and on identifying the reasons why these issues would not simply be expressed in other areas upon the removal of Greek life.

Drexler proceeded to address the need for Greek life to introduce new members into fraternities, specifically members who are willing to make the necessary changes to move the fraternities in the right direction. He also discussed the issues he finds with fraternities’ charities and philanthropic events.

“Frats try and show that the philanthropic things they do massively outweigh the misogyny and xenophobia that occur on campus,” Drexler said. “But really, the condition upon which fraternity members may participate in these philanthropies is typically whether or not they have money to donate, and to donate specifically to organizations that hold large galas and allow for privileged persons to participate.”

Drexler concluded his argument by stating that the presence of such organizations has had negative effects in the past and that, because they do not have the tools necessary to make changes for the future, they are very likely to continue making the same mistakes.

When Drexler finished speaking, Khan began her argument by reestablishing the need to delineate the impacts of Greek life and of the student body as a whole. “Misogyny, racism, sexual assault—all of these things will exist in alternate spaces. Bad people will be bad people anywhere,” Khan said, thus establishing that the elimination of fraternities will not solve the problem.

Khan proceeded to argue that there are problems with placing the blame on fraternities as a whole, rather than on the individuals responsible. “If there is a sexual assault incident and the response is that he or she shouldn’t have gone to this particular frat, because this particular frat is creepy, then that is in itself victim blaming,”Khan said. “It undermines the devastating incident and takes away blame from the person actually responsible. This creates a more harmful mindset than solving the endemic problem of assault and misogyny on campus as a whole.”

Khan concluded her argument by stating that we should use fraternities as tools for improvement, rather than banning them and consequently allowing the issues they institutionalize to simply relocate themselves to even less easily regulated spaces.

After Khan had finished speaking, Jiang and Nwanevu returned to the podium to recapitulate their respective team’s arguments. Jiang addressed the need to confront these issues not solely within Greek life but rather among the UChicago campus as a whole. She also stated that fraternities and their constituent members are not inherently bad just because problems such as sexism and racism manifest within Greek life.

Nwanevu clarified that the debate question was not asking whether or not fraternities can evolve to a point where they can do more good than harm; it asked whether or not they do more harm than good as they exist today. Nwanevu also clarified that his argument was not to blame fraternities for these problems or to say that they are endemic to Greek life, but rather to say that there are institutional factors that allow fraternities to ignore the issues at hand more than other organizations do.

When Nwanevu finished speaking, the Q&A began. Second-year Harry Kioko, a brother of Delta Upsilon (DU), was first to speak. He questioned the affirmative team’s points about fraternity dues, namely the fact that brothers are paying for the connections and benefits that come from being affiliated, and compared them to the fees of other RSOs. Nathan Decety, a fourth-year DU brother, contributed to Kioko’s argument, questioning whether or not we would find fees from an organization such as the ceramics club problematic.

In response, an unidentified student clarified the affirmative team’s point, saying that what is important is the fact that the fraternities are using these dues to insulate themselves against the harm they are doing.

“To say that sexual assault only happens at fraternities is an utter mistake,” Jiang said. “It happens in a variety of other settings, and the way we deal with that is to recognize that the University is [terrible] at handling sexual assault and being there for survivors. The solution is not shutting down the fraternities.”

Nwanevu responded by stating that fraternities should be more transparent about what they are doing. “I think that, oftentimes, fraternities adopt this attitude of, ‘Oh, people are going to hate us either way, so let’s just keep doing our thing,’ and that kind of mentality is not going to solve any issues.”

In an interview with The Maroon following the debate, Khan said that the point of these types of debates is to prove to the community that, in order to reach a solution, we must consider all possible solutions and all perspectives.

Drexler pointed out that the large crowd generated by the debate is indicative of how pertinent these issues are on our campus.

“The debate allowed members of the campus community to voice their concerns and talk about the issue,” Drexler said. “Most of these debates often occur on Overheard, or Facebook, or Yik Yak, and although those are important means of communication as well, there is a certain level of seriousness that is achieved through debates such as this one.”

Before starting her concluding statement, Jiang asked that the students in the audience involved in Greek life raise their hands; the majority of the audience’s hands went up.

“A lot of people are here today, and they are here because they care,” Jiang said. “That, right there, is what matters. People in Greek life are committed to making a change, to looking at the past and seeing their mistakes. We can use Greek life to springboard forward to a place where fraternities do more good than harm.”