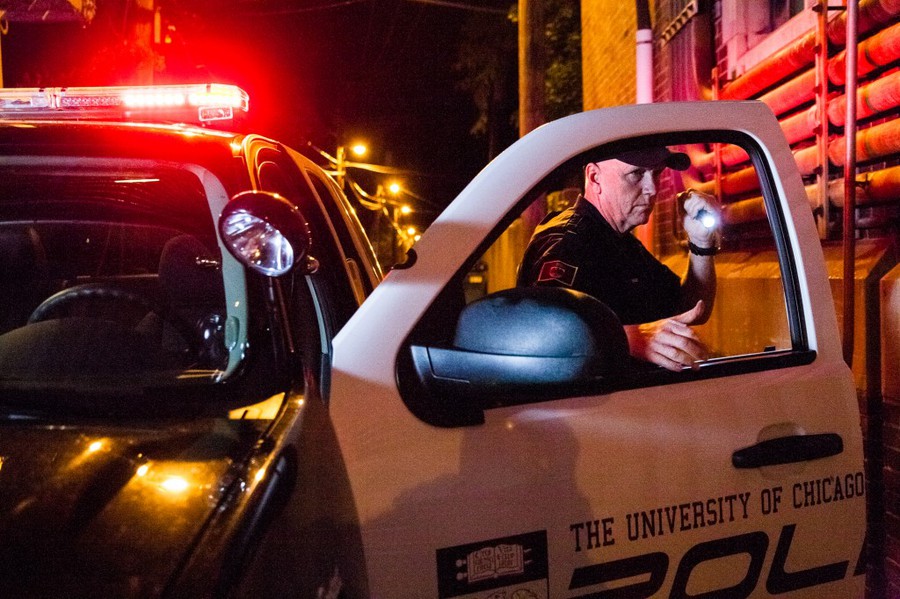 The University has released new details about the University of Chicago Police Department’s (UCPD) operations, elaborating on crime rates in Hyde Park and Kenwood, new transparency initiatives, and its plan to increase the number of officers on active patrols.

In a July 27 update, citing community concerns about the neighborhood’s crime rates, President Robert J. Zimmer wrote that the University will increase the number of UCPD officers by 28 percent, allowing a higher concentration of officers throughout the UCPD patrol area, which runs from East 64th Street to East 37th Street and from South Cottage Grove Avenue to the lake. While UCPD Associate Vice President for Safety, Security and Civic Affairs Marlon Lynch said that the additional officers will begin work when the hiring and training processes are complete, he did not specify when this will be.

Zimmer’s email specifically stated that more officers will be placed along 53rd Street, which, according to Lynch, will allow officers to patrol areas that University students frequent, such as the Center for Innovation Exchange and Harper Court. Additionally, the plan includes an increase in UCPD/Chicago Police Department (CPD) joint patrols, which Lynch said will target areas where the community has expressed the most concern.

“Community member concerns are primarily about violent crime, such as robberies that occur in their neighborhoods,” Lynch said of the reason for these decisions. “There has also been an increase in concern over city-wide shootings.”

“Militarization, over-policing, and the institutionalization of a privatized surveillance state are not paths to real public safety,” reads the statement. “The increased presence of CPD in this area, in the midst of the police killings of Black and Brown people, is not what safety looks like.”

Third-year CEP member Hannah Breslau echoed these sentiments. “I am disappointed…but not altogether surprised,” she said. “I think that the security update reflects a trend in the University’s policing practices and policies which we feel ignore the community and student interests and focus on increased militarization.”

Breslau added that CEP recognizes the need for crime reduction, but that it believes a better solution is increased transparency and accountability on the part of UCPD. She also explained that CEP takes particular issue with the increased joint patrols with CPD.

“If there’s one unanimous opinion we’ve gotten from the community, it’s that at least UCPD is not CPD; it’s a lesser evil,” she said.

Zimmer’s message concluded with the introduction of what he calls a “robust community engagement program” developed in partnership between the UCPD and the University’s Office of Civic Engagement (OCE) to inform the community about new safety measures such as the ones listed in the email.

OCE Director of Communications Calmetta Coleman said that the new program will focus primarily on the formation of a community advisory committee and on increased transparency in relaying policing information to the community through an online database. The University first announced its online transparency initiative in April 2015, which includes arrest record information, details about traffic stops, and additional background information about UCPD practices.

Coleman pointed to the April 2015 announcement of the creation of a community advisory committee consisting of residents of the Hyde Park, Kenwood, Oakland and Woodlawn communities. She added that the OCE and UCPD have held multiple conversations about these initiatives with the state elected officials that represent parts of the UCPD patrol area, and with local aldermen including Sophia King (4th), Leslie Hairston (5th), and Willie Cochran (20th), according to Coleman. The UCPD/OCE partnership and initiatives do not yet have a projected timeline.

Breslau expressed doubts about the new community initiatives. “We were surprised when they said they’ve talked to the community because that seemed to be the opposite of what people have been wanting,” she said. “It would be great if it helped, but we have reason to be skeptical.”

According to the Chicago Tribune’s neighborhood-by-neighborhood crime reports, violent crime in Hyde Park has fallen in 2016. It has been higher in recent months than at the beginning of the year, though this is typical: summer months are often more violent than winter ones. This summer has been less violent than last summer, however. There have been 0.5 violent crimes per 1,000 people in Hyde Park in the last 30 days, which is down 30 percent from the same period last year.