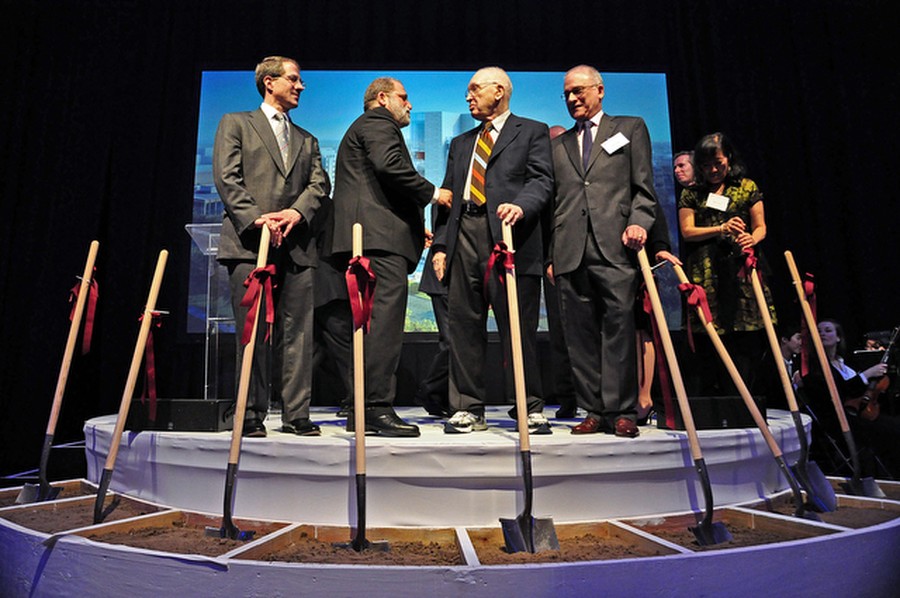 The Center, on 60th Street and Ingleside Avenue, is expected to be finished in spring 2012 at a cost of $114 million. It will be two buildings—an 11-story tower and a surrounding complex—with a 450-seat auditorium and a 120-seat theater. The Center will have a seminar room, studios, and practice spaces for teaching and performances.

“If you take the vibrant energy of the arts and you add the intellectual vigor of a core curriculum… and you whip it up, you will have the Logan Arts Center,” said actress Marilu Henner (X ‘74), as part of a series of remarks from students, faculty, and alumni on what the Logan Center means to them. President Robert Zimmer, Chairman of the Board of Trustees Andrew Alper (A.B. ‘80, M.B.A ‘81), and Daniel Logan, son of donors Reva and David Logan, for whom the Center is named, all gave brief speeches.

Zimmer discussed how the center will impact education at the University. “Art has been recognized as an important part of education for over two millennia,” he said. Although the first president of the University, William Rainey Harper, wanted the University to house the arts, campus visual and performance artists have worked without a comprehensive center since the University’s inception.

While Zimmer discussed the near future of arts education, Alper focused on long-term significance of the building in Hyde Park. “It will be a wonderful and lasting legacy for the future generations of Chicagoans,” he said.

Daniel Logan explained the reason for his family’s commitment, a $35 million donation. “As my dad says, ‘the building is only the beginning.’ He is interested in changing lives,” said Logan.

Three new murals emphasizing the connection between the neighboring community and the University were unveiled at Wednesday’s ceremony, which included performances from the University Symphony Orchestra and videos about the Arts at the University.

The ceremonies and speeches led up to members of the Logan family performing a ceremonial dig accompanied by the sounds of applause and the University’s Motet Choir while administrators stood behind them.

More events took place all day; these included a faculty roundtable on arts at the University, a showcase of visual art, music and writing, and performances by various campus groups.

According to Bill Michel, director of the Logan Arts Center, the process of planning the ceremony began in January and efforts began in earnest in March. He said the next major event will be the grand opening of the facility in two years. Something less grand, however, might happen before the completion. “We may do a topping off ceremony sometime next year,” he said.

The ceremony will mark the completion of the tower and Michel expects that to happen in winter 2011.

Other recent efforts by the University to increase student participation in the arts include the 60 Days of Arts celebration on campus and the Arts Pass, which provides students with discounts and special offers at arts organizations in Chicago.