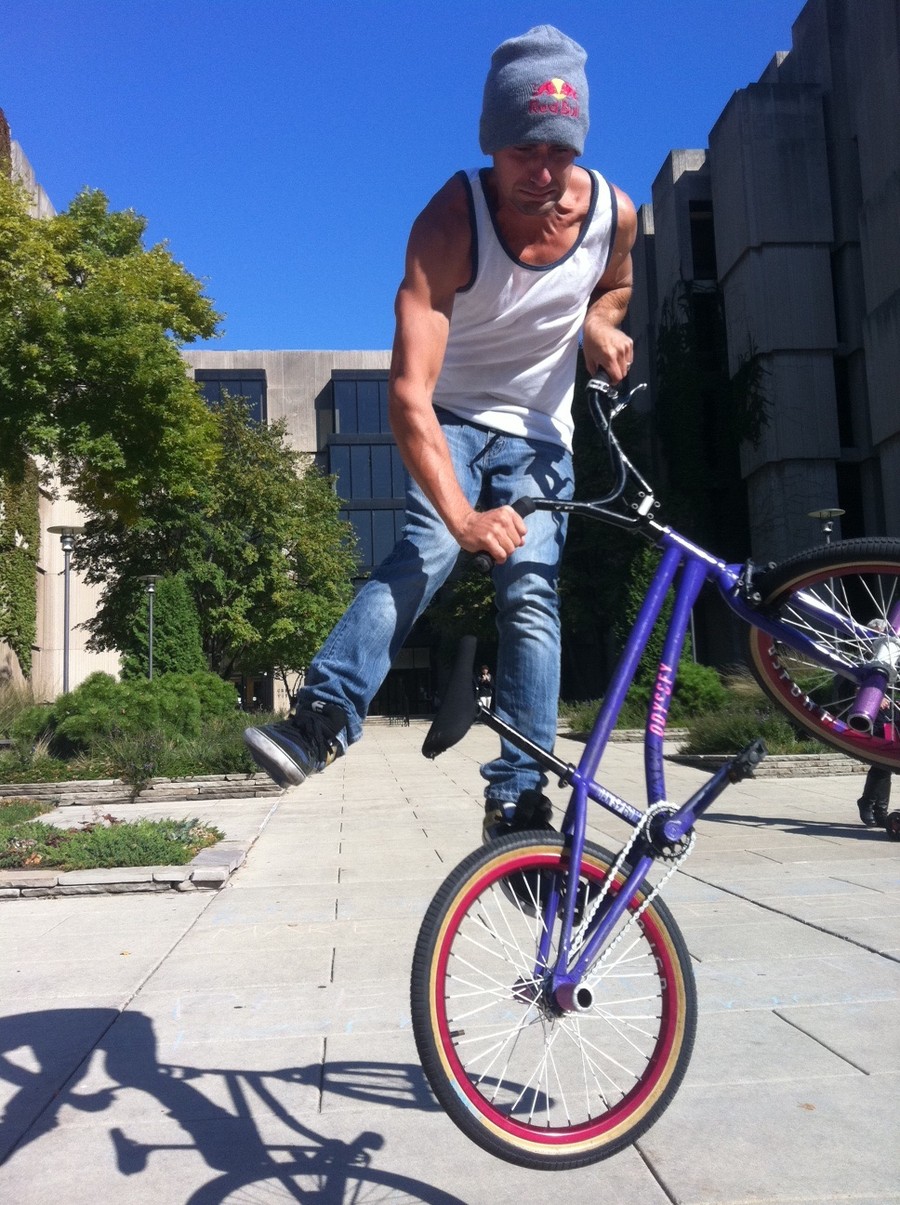 The quad is usually synonymous with learning, books, the life of the mind, and massive amounts of stress.

On Tuesday, October 4, Red Bull made the quad about a little bit more than that. Red Bull-sponsored Terry Adams, a professional BMX flatland rider, X Games gold medal winner, and two-time recipient of BMX Magazine’s Number One Ride Award, transformed the quad into a playground and a canvas.

From 10:30 to 11 a.m. on Tuesday, walkways, steps, and gothic architecture were all at Adams’s disposal as he reinvented what it means to bike across the quad.

Adams is on a 50-day tour to college campuses around the country in an effort to promote Red Bull.

“This is probably around day 50,” said Adams, who stands at five-feet-eight-inches, weighs in at 148 pounds, rocks a Red Bull beanie, and sports a bike that can actually compete with Max Palevsky’s color scheme.

Red Bull has toured across the country, showcasing Adams’ skills at campuses like South Florida and Harvard. Performing on a college campus, though, isn’t quite the same as riding at the X Games.

“The college campus stuff is really just hanging out more than anything. Really it’s just finding some cool spots to ride, finding the flattest spots I can, and busting some moves,” Adams explained.

Reactions to Adams’s demonstration vary by campus and are based largely on the composition of the student body, according to Adams.

“If I’m at Harvard or something [like Chicago] no one cares because everyone is there to study. If it’s a party campus and I pick a spot where students are just kind of hanging out, they get pretty stoked and are taken aback. Sometimes I’ll get a ‘Get out of the way!’” Adams said.

Adams’s riding style matches his creative personality. So does his BMX arena.

Adams specializes in flatland, which is performed on smooth flat surfaces without ramps, jumps, or rails. It is as much of an art form as it is a sport, and it resembles breakdancing on a bike more than actually pedaling down Ellis. Adams has twice been named the best flatland BMX-er in the world.

Despite his talent and success, Adams does not come across as one of the world’s top athletes at first glance.

“What’s cool about riding on college campuses is the students don’t really know I’m a pro athlete or that I ride for Red Bull. They kind of just think I’m a student. They just think I’m a kid on a bike that goes to school,” said Adams.

There are very few people in the world who can match Adams’s skills on a BMX bike, and encounters with zombies (not of the zombies vs. humans variety) and tightrope walkers are more likely than seeing bike riding quite like this on the quad anytime soon.

Seeing Adams ride in person is exhilarating. Your mind struggles to grasp what your eyes are seeing. The bike spins beneath Adams’s legs like a basketball, and the two-wheeler seemingly loses its front, back, side and  bottom.

For the two-time NORA Cup winner, work is more art than sport. For Riding is about creating. Though his athleticism is shared by few and far between, it his ability to create something beautiful that truly sets him apart.

“Flatland riding is an infinite style of BMX, and that’s what makes it stand out. There are people trying to coming up with tricks every day around the world. It’s a non-stop progression sport,” Adams said.

In a sports world where it seems like everything has been done before and every ceiling has been capped, Adams pushes the limits.

“I could sit here and pick up the bike and look at it and think of 30 to 100 tricks right now, but thinking is a totally different thing than actually doing. The hard part is actually going out and learning those tricks,” Adams said.

For someone who lives to defeat the impossible, doing the unthinkable is a habit, one which started when Adams was 10 years old.

“I started riding because it looked impossible. You know, as a kid seeing something on TV—if it’s something you really don’t understand and it looks crazy when you see it, it makes you want to go out there and do it. So I guess the fact that it looked like riders were floating or flying got me to fall in love with the sport,” Adams recalled.

Adams, now 28, has not changed much since his teenage days as a dreamer. Being sponsored by Red Bull and still riding his bike in the most unconventional way imaginable, Adams has his own pair of wings and no ceiling to hold him down.