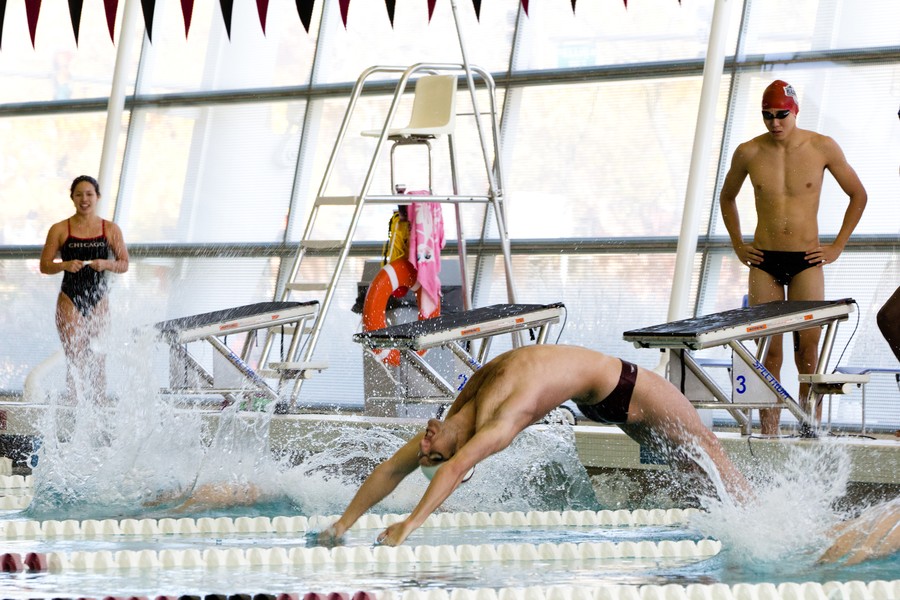 Traditionally, the term “team sports” conjures images of glory on the gridiron or in the diamond, but definitely not in the swimming pool.

Don’t tell that to the Maroons.

“We have grown to be a great team and can stand up to much greater competition than we could four years ago,” fourth-year Tara Levens said. “Across the board we had great swims. This was really a team effort, and we saw people step up in every event to score critical points.”

The Maroons displayed a strong team effort, indeed, over the weekend as both squads defeated rival Wash U in dual meet competition, defending and expanding their flawless dual meet record to 3–0. The men overcame the Bears by just over 30 points with a 164–134 victory, while the women dominated the meet by 80 points, for a score of 187–107.

For most Chicago students, and for the sporting world at large, these scores communicate very little, because the team aspect of swim and dive is overshadowed by the individual perception of the sport. Swim and dive is scored by awarding points based off race finish, and the team with the highest score wins the meet. Thus, a team effort is critical to earn the win, for one strong swimmer alone cannot win a meet.

The men were led by strong performances by first-years, with Andrew Salomon and Andrew Angeles winning two events each, and with fellow first–year Matt Staab also marking a win in the 3-meter dive. Angeles continued his seasonal dominance, winning the 100-yard breaststroke by over two seconds and the 200-yard breaststroke by nearly five seconds. Third-years Bobby Morales and Charles Du also recorded one win each, and fourth-year Marius Aleksa won both the 50- and 100-yard free.

While the men had strong support from young blood, upperclassmen led the way for the women. Second-years Cathy Chen and Vivian Yuen took one and two wins respectively, third-years Tatum Stewart and Kathleen Taylor won their events, with fellow third-year Becky Schmidt winning both the one- and three-meter dives, and Levens recorded a win in the 100-yard backstroke. The first-years were also well represented, with Bizzy Millen winning the 100- and 200-yard freestyle and Jennifer Hill winning the 200-yard breaststroke.

“We were very satisfied with these wins,” Levens said. “The team performed great, and really stepped up against a big rival.” Levens added, “3–0 is definitely expected at this point.”

Now the Maroons look ahead to ending their fall season at the Phoenix Fall Invitational. As head coach Alex Weber said after the Maroons first dual meet of the season, the goal of the squads during this early season is to “keep training and competing hard and to work on things [they] did not do well.”

“I think everyone, at this point, is pumped for the upcoming Phoenix Fall Invitational,” first-year Tiffany Ho said. “Everyone is ready for hard work to pay off.”

The Maroons return to action November 18 in Chicago at the Phoenix Fall Invitational.