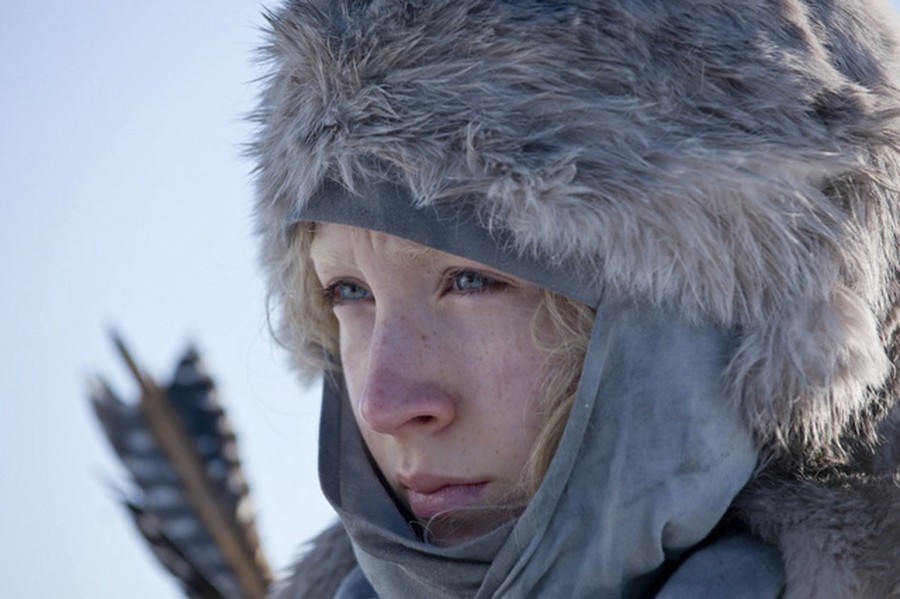 Saoirse Ronan has one of the most intriguing faces in cinema today. Pale and freckled with piercing blue eyes framed by long, white eyelashes, it’s sometimes disarmingly beautiful, bewitchingly alien, or both at once. Ronan’s distinctive face helped her become one of the youngest actresses ever to receive an Oscar nomination for her work in Atonement (2007), and made her a shoe in as Susie Salmon, the murdered protagonist of The Lovely Bones (2009). It’s also the only face that could ever play the titular role of Hanna with just the right amount of approachable oddity, for Hanna is a very odd child. Hanna lives with her father (brown-eyed hunk Eric Bana) in an arctic forest. She hunts caribou with a bow and arrow. She uses weapons like an expert marksman. She can speak at least five different languages and recite random facts, like the number of people living in Rabat, Morocco and the number of muscles you use when you kiss someone. This litany of skills is just one reason why top intelligence agent Marissa Wiegler (played with icy perfection by the impeccable Cate Blanchett) wants her captured.

Hanna is a fun movie. Joe Wright, most well-known for directing Atonement and Pride and Prejudice (2005), is fantastic at capturing the mood and ambiance of a film. Atonement and Pride were period dramas—slow in pace, lush in feel, with sweeping string scores and long shots of sunsets. Hanna, however, is an adrenaline-fueled action thriller and Wright proves he’s at ease in both genres. The techno music score throbs and pulses over crisply filmed action sequences. The sound editing crew in Hanna is impressive—a sharp knife blade digging into squelching flesh, the whir of a flying arrow, the rattle of a tea kettle—they depict these noises expertly and are sure to get an Oscar nomination.

Though Wright’s jump from Jane Austen fare to this highly stylized thriller may be hard to connect at first, the stunning visuals made famous in his earlier films can also be seen in Hanna. Glorious long shots of a rock-filled desert and a close-up of Saorise Ronan’s face with specks of blood mingling among her pale brown freckles remind you that this was the same man who made Keira Knightley and a certain backless green dress forever memorialized in pop culture history. Hanna has some truly beautiful sequences and is a testament to Wright’s keen artistic eye.

It’s in the plot, however, that Hanna falls short. While the concept is certainly fascinating and the film keeps you on the edge of your seat, the ending is unsatisfying. The revelation about Hanna’s past is cliché and predictable, and interesting secondary characters (such as the hilariously bohemian British family) are quickly discarded after their comedic relief has been expended. Additionally, little is done to explain or contextualize Wiegler’s cold-bloodedness, and you’re left wondering why capturing Hanna matters so damn much, even after the great plot twist is revealed.

But in a genre frequently rife only with trite, secondary roles for women, it was nice to finally see them kick some major butt. It was hard to decide what made the first fight sequence so impressive, its clever stunts or the ferocity of its leading lady. Hanna is also refreshing for its lack of heterosexual male gaze; there are no gratuitous naked showers or slow motion shots of breasts jostling up and down in tight spacesuits. (Although the cameras are generous with the shots of Eric Bana’s abs, for which all the Bana-inclined are eternally grateful.) Hanna has little use for the unnecessarily lewd scenes so prevalent in action movies. It stays focused, like it should, on Saoirse’s fascinating face.