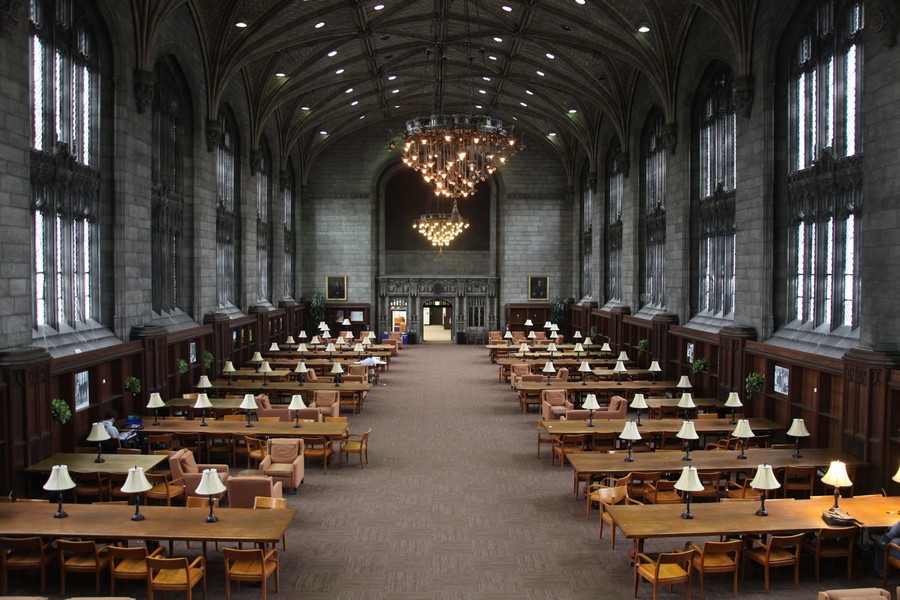 Of the six (physical) libraries making up the U of C Library (institution), the Regenstein is far-and-away used most often, the focal point of the so-called central system. Opposed to the earlier departmental model where resources were divided according to academic division, resources today are largely centralized at the Reg and Crerar. The Eckhart and SSA libraries are essentially small satellite branches of the Reg, and the D’Angelo Law library has moved to what the Provost’s Task Force calls “a purely departmental model, shifting much of its research collection to the central system.” And with Crerar focused on science, the Reg stands at the center of the library system.

In 2006, the Provost’s Task Force published the results of its review of the library system and made specific recommendations. Since then, most of the major changes to the system have been in response to those recommendations, such as the acknowledgement that other schools were moving more and more resources into off-site storage. Instead, the committee recommended, the U of C has been applauded for its decision to build what is now the Mansueto Library.

Attached to the Regenstein—enter through a long corridor passing Special Collections in the Reg—is what appears to be a giant bubble emerging from the ground. This huge glass dome houses Mansueto’s Reading Room, carefully designed by architect Helmut Jahn to provide a bright, open space for students to study. Instead of housing books above ground, Mansueto stores materials underground in a computerized robotic system. To check out books, users make requests on the library website and the book is retrieved in about five minutes.

Students concerned with the sun’s rays and the public nature of studying in Mansueto can opt instead for the Regenstein, which has multiple spaces for individual or cooperative studying. In the A-Level basement, for example, people studying in groups have led to a more festive atmosphere. In the B-Level, on the other hand, silence is revered; drop a pencil and prepare for dirty looks that will make your ancestors roll in their graves. Given its traffic, it’s no surprise that the first floor is also relatively noisy and social. The other floors all mix different study spaces, from group study rooms with white boards to work stations in the bookstacks where people silently ponder alone. If you’re ever unsure, check out the posters that have been placed throughout the library buildings, designed to tell you where you can talk, eat, and use your phone.

Besides the opening of Mansueto and an updated space for the Special Collections Research Center—where anyone can request and directly handle materials like Albert Michelson’s handwritten notes on the speed of light or Enrico Fermi’s letters to the Nobel Prize committee—the Reg this year is unveiling a new first-floor cafe space. Student-run coffee shop Ex Libris will move from its current location in the basement, another recommendation from the Task Force.

The science-focused Crerar is all split between books and study spaces, though the library as a whole is much more focused on silent studying. There are group study rooms throughout the building, but the general atmosphere is much more focused. This is the place to go if you need peer pressure to stay on the ball–it’s often frequented by graduate students in the Biological Science Division who can put your studying skills to shame. Like the B-Level, the majority of Crerar’s studying space is deathly silent, so don’t wear flip-flops or high-heels to this library.

Attached to the Law School, the D’Angelo Law Library is designed for use by students in the law school but is open to all, and is especially helpful if you live south of the Midway and don’t want to make the trek to the Reg. Undergrads can enter the building at any time during the day; at night, show the guard your UCID and sign in at the desk. The second floor of D’Angelo has an open reading room that is similar in atmosphere to the first floor of the Reg, while the other floors are again silent. Don’t be that undergrad who makes too much noise and attracts everyone’s angry attention—unless you’re Tucker Max, who tells the story of how he and his friends once streaked through multiple floors. D’Angelo also has a magazine room stocked with the current and back issues of dozens of popular magazines, from Time to Wired. Careful though, although the beautiful view from the window seats overlooks the law quads, it can also be distracting.

The library at the School of Social Service Administration is similar to D’Angelo in terms of materials. The SSA Library mainly holds materials for its graduate students, though College students sometimes find themselves checking out a book for class when the Reg copy has already been taken. The SSA Library is small and can be hard to find, but it’s there—and if you’re looking for items such as psychology books, it’s a good resource.

Last but not least, Eckhart is an intimate, cozy library located in Eckhart Hall, featuring a collection of materials focused on the world of mathematics. Outside of math majors, the main reason for students to visit Eckhart is to check out a textbook. For math majors, though, Eckhart contains all sorts of materials in a convenient spot.