A first year student at Booth is re-adjusting to life in Chicago as a student, rather than a world-traveling Olympic-class pole vaulter. 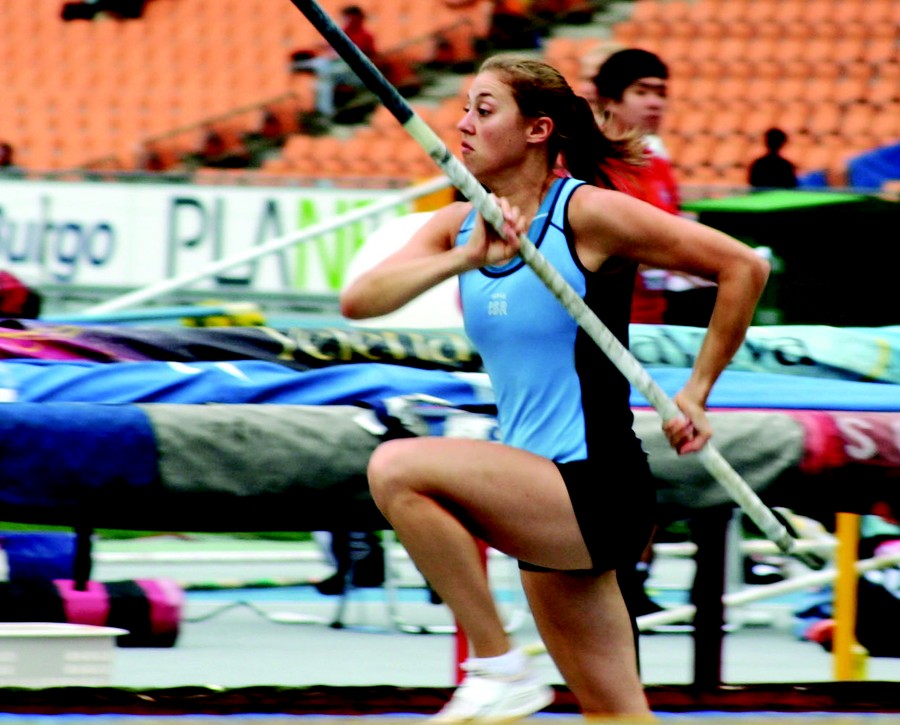 Booth School of Business student and Forest Park native Jillian Schwartz was never leaps and bounds away from the Olympics.

After making it to the 2004 Olympics in Athens for Team USA, Schwartz, now 33, competed this past summer in London on behalf of Team Israel. The pole-vaulter placed 18th with a height of 4.40 meters, just above her 4.30-meter clearance at Athens.

“The experience in general was incredible. Walking around the village and seeing athletes from different countries is always really cool,” she said. “Obviously [not winning a medal] wasn’t quite what I wanted, but I had a lot of fun out there, which is a big part of [competing] for me.”

In 2008, Schwartz just missed her chance to represent the U.S. in Beijing with a fourth-place finish at the trials. A year later, she won a gold medal at the Maccabiah Games in Netanya, Israel and was wooed by Israeli athletic officials. If Schwartz moved to Israel and joined their team, they said, she would have a better chance of competing in the London Games.

Though she moved across the world, Schwartz said that her life was mostly the same as it had been: training and competing.

“I wasn’t living [in Israel] full-time, because my coach was in the U.S., so I went back and forth a lot,” she said. “I saw the same people year-round because the U.S. team doesn’t train together.”

Still, Schwartz’s Jewish upbringing bonded her to the Israelis and got her past any cultural differences she experienced.

“When I went [to Israel] there was an instant familiarity…people have all the same traditions from how I was raised,” she said. “I really felt like I was a part of that culture.”

Still, Schwartz managed not to feel isolated from the U.S. team after the move, and none of her previous teammates expressed animosity. “In the event I was in, you’re competing against each other, but it’s more [that] you’re competing against yourself. There’s not much you can really do to hurt someone else’s chances of doing well,” she said. “For the most part I got really positive feedback from my training partners [about the switch to Israel’s team].”

The figurative bar was raised in other ways, however.

“There [was] always a little more pressure on me in the Israeli team because it was such a small team,” she said. “There’s a lot more emphasis on your performance and you’re just more in the spotlight, and you feel more engaged with the federation and your club.”

After the London Games, Schwartz left the field professionally and enrolled in Booth’s two-year M.B.A. program. She completed her undergraduate studies at Duke University in 2001 and, though she entered college as a pre-medical student, graduated with a degree in economics. This began her move toward the business world.

“I kind of realized that [brand management] is what I had been doing for myself,” she said. “In terms of dealing with the financial aspect of being an athlete—the marketing, and just about everything—I was in charge of my own brand as an athlete, basically. So I want to learn how to apply that to a big company.”

But little did Schwartz realize that getting a degree from Booth would prove to be its own challenge.

“I’m way busier [now]. I had a lot of downtime before and now it’s like juggling classes, and recruiting career events, and social events, and it’s crazy. It seems like I’m just busy all the time, way busier than my undergrad,” she said.

But her move to Booth does not mean she’s left athletics behind. “Maybe I can start volunteering a little bit, and helping out where I can in coaching or just being around track and field,” she said. “It’s been a part of my life for so long, and it’s something I really want to give back to.”