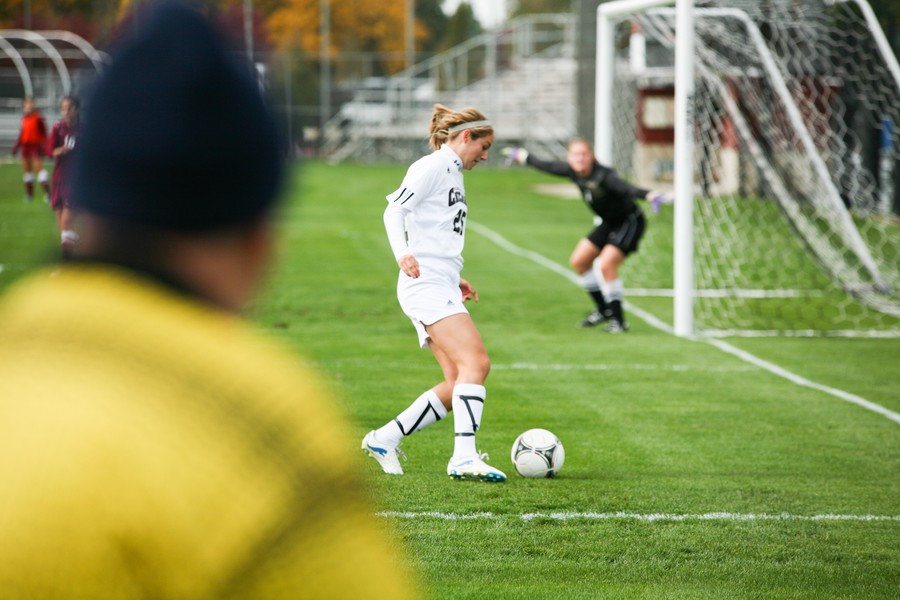 They’re at it again. Chicago (10–5, 2–2) overcame UW–Oshkosh (9–4–3) on Saturday thanks to another clinical combination between second-year Sara Kwan and fourth-year Brigette Kragie. The final score: 1–0. Kwan was the provider this time, setting up Kragie for the game-winner late in the second half.

It was a controlled performance from the Maroons, who restricted their opponents to only four shots throughout the game. But at first, it seemed as if they would go away frustrated.

The first half was a relatively even contest with both goalies forced into important saves to keep the match level. The second was a different story altogether. Chicago was dominant, out-shooting the Titans 11 to one.

“I was most pleased with the passion and the intensity that we showed in the second half,” head coach Amy Reifert said. “We were a little slack in the first half and in the second half we came out fighting and did a lot of very nice things in terms of winning balls and making passes and creating dangerous chances.”

Despite their dominance, the Maroons left it until late to secure the win. Kragie broke the deadlock in the 83rd minute with a simple finish inside the area after being played in by Kwan. That was Kragie’s seventh goal of the season and Kwan’s ninth assist. Between the two of them, they have scored or assisted over a quarter of the team’s goals this season. And Reifert is as familiar as anyone with the pair’s ability.

“They are both very talented, passionate players,” she said. “They have a very good sense of each other on the field, where the other one is, and, especially in the final third, they love to combine. They’re fun to watch. They’re both two dynamic, attacking players, who work extremely well together.”

After two non-conference games in two weeks, the Maroons will now refocus their attention on the UAA. The transition back to conference play can be a tricky one as the intensity—and the quality—of the competition increases. Knowing full well that winning out might be Chicago’s only chance at an NCAA tournament bid, Reifert is intent on taking as much as possible from the Oshkosh game.

The Maroons travel to Cleveland this Friday where they will face Case Western in the first game of a weekend doubleheader at 5 p.m. ET. The second game will be played on Sunday against Rochester, in Rochester, NY, at 10 a.m. ET.