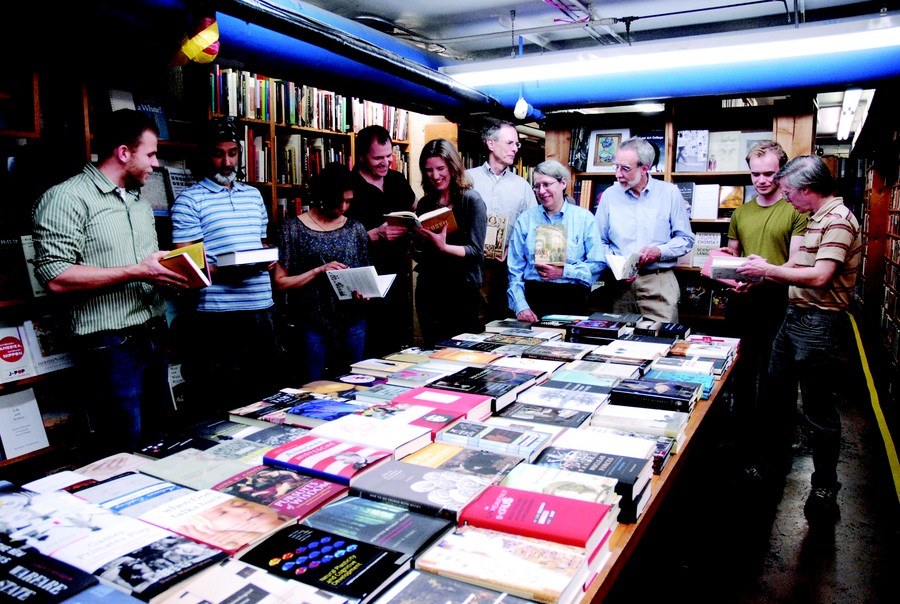 Employees of the co-op gather at the front table, always laden with new academic work.

On November 21st, the Seminary Co-op Bookstore will reopen at a new location, one block further east and one story higher than it has been for the past 51 years. Last Saturday I talked with members of the Co-op community about the move, and got the chance to wander the underground bookstore’s meandering aisles for one of the first and last times I ever will, since I am a first year.

Bookstore manager Jack Cella, a knowledgeable, placidly friendly figure who has been affiliated with the store since 1968, clarified the reasons for the move. He explained that the U of C bought 5757 South University Avenue, the building that has thus far housed the Co-op, in 2008. Its plans for heavy renovation over the coming year meant that the bookstore couldn’t remain where it was. On November 12th, it began shifting to its new location at 5751 South Woodlawn Avenue.

Cella, having shared his memories about the Co-op’s history, seemed to view the change in a positive light. He called the new space “better in every way.” “It’ll be above ground, which is nice,” he said. “No steam pipes that are on 24 hours a day, windows, [and] natural light for the first time in 50 years.”

The current location’s low ceilings and unaffected aesthetic features rows upon rows of packed bookshelves as its sole decoration. Could another space with a very different feel incite the same level of tingly anticipation in its patrons?

Cella thinks so. “[In the new space,] you definitely won’t go in and see your way from one end to the other without taking an awful lot of turns,” he said. Stanley Tigerman, the architect designing the new space, has been a member of the Co-op since 1980 and has a unique understanding of what makes it so special for its customers. “He and his partner, Margaret McCurry, have tried to retain that sense of discovery, of turning the corner and not knowing what you’re going to find, but to do it in a way that avoids the downsides as much as possible—[in the current space] you’re not just running into people you know, but running into people, period!” Perhaps he has a point; as you walk through the store, it’s easier to enjoy physical intimacy with the books than it is to enjoy physical intimacy with other people.

Physical intimacy aside, the Co-op has been at the center of numerous meaningful interactions and relationships over the past 51 years. Cella cites the people he has engaged with and worked alongside as having made his job special. “[It’s] how the customers come in, and share their interest in books and ideas with you. A few years ago the New York Times did a story on bookstores and they asked ‘How often do you recommend books to customers?’ and I realized I very seldom recommend books to customers, but customers are always recommending books to me!” What started as a few books being sold on top of a grand piano at the Divinity School has grown into a giant community enterprise of over 54,000 shareholders. Yet the bookstore has retained great personal significance for many.

U of C alumnae Jasmine Kwong (AB ’06) and Megan E. Doherty (AM ’05, Ph.D. ’10) have launched an ongoing project documenting the rich history of the Co-op. Kwong describes her first thought upon hearing about the move to be something along the lines of, “No!!!” Her second thought, as an amateur photographer, was, “I’m going to have to take some photos.” After she discovered fellow Co-op documentarian Doherty, the two jointly took on the mammoth task of preserving the Co-op’s history in an archive of photos, portraits, and audio interviews with customers. Kwong says that while she was initially grieving the process of relocation, she seems to have “turned the corner” and can see the positive aspects of the move.

The customers at the Co-op on one of its final days in the basement echoed Cella’s sentiments about the bookstore’s magical quality. Interviewees ranged from young undergrads to people who have been part of the U of C and the Co-op for decades. People talked about the thrill of discovering knowledge they never thought they’d be interested in acquiring and of having insightful discussions with community members they’d never met before. As part of her documentary project, Kwong spoke to a couple who first met at the Co-op decades ago and brought their 6-year-old daughter with them to the interview.

Kwong and Doherty’s endeavor will culminate with an exhibition in the Regenstein Library's Special Collections gallery in 2014. You can check out the ongoing project at semcoop-project.org. Captured memories of the first location are invaluable for those saying their grudging goodbyes to the old bookstore and for those who, like myself, never really had a chance to say hello.