Bond shaken and stirred, with a touch of gray 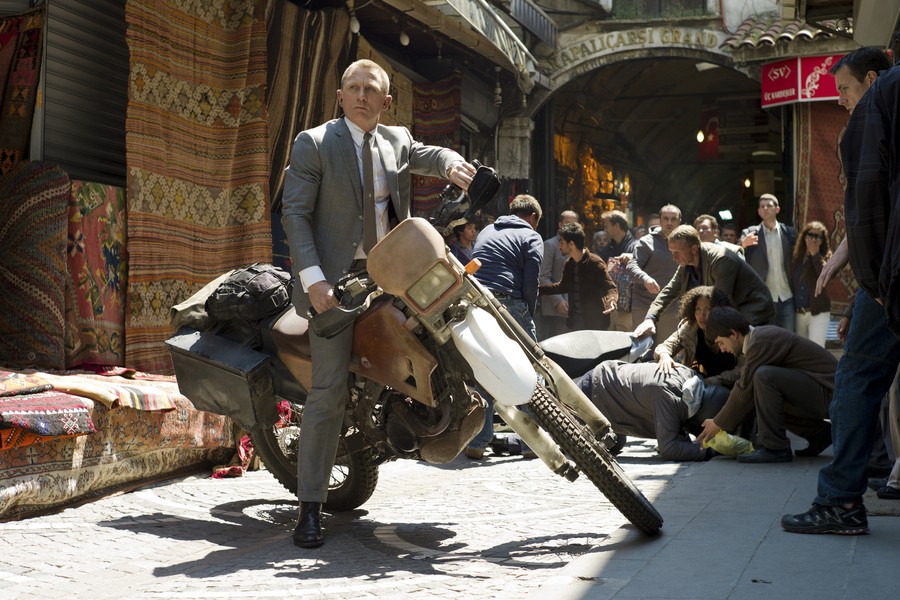 Agent 007 (Daniel Craig) pulls up to a Turkish market in the opening scene. No good parking.

When Casino Royale hit screens in 2006, critics hailed what appeared to be a rejuvenation of the James Bond series. Gone were the cliché scripts and the silly gadgets that had characterized the series for decades. What we got instead was something far more raw, with a brand-new Bond played by Daniel Craig, who was a little less dashing and a little more dangerous. And suddenly, it dawned on everyone that James Bond movies could be more cerebral than just things blowing up and the pursuit of beautiful women. The 2008 follow-up Quantum of Solace, however, largely disappointed the newfound expectations of the franchise and dampened the hope that the next film would be better.

Skyfall, the latest installment of the Bond series directed by Sam Mendes, strives to be better. With a greater emphasis on Bond’s boss M, played by the ever-impeccable Judi Dench, along with the inclusion of esteemed actors Javier Bardem and Ralph Fiennes, Skyfall boasts top quality acting to compensate for some of the shortcomings of its plot.

James Bond is, of course, played by Daniel Craig, no longer a newcomer, and more comfortable in his role than ever. But Skyfall offers a new revelation about Bond: he is aging. Bond sports some white whiskers on his chin, and is clearly past the glory days of his physical condition. He is perplexed to find that some of the top-level positions at MI6 are being filled by men who look twenty years his junior (“But you’ve still got spots!” Bond complains to the new quartermaster Q, played with amusing prickliness by Ben Wishaw). But Bond is here to prove he can still finish the job, and he still looks good in a suit.

Indeed, much of MI6 is past its prime, and it is the portrayal of this particular aspect that accounts for the film’s more substantive content, though not exactly the cool intelligence of Casino Royale. The agency experiences a failure of its Cold War-era intelligence techniques, and is at a loss of how to handle the increasing onslaught of cyber warfare. Although the film carefully navigates the newfound threats with an “old ways can still be the best ways” attitude, it offers a provocative and eerie glimpse of the changing tides of espionage and conflict.

Raoul Silva, Skyfall’s chief villain, is a master hacker who revels in MI6’s technological deficiency. He’s also overtly effeminate and sports a champagne-blonde mullet, and the role probably would have been a complete catastrophe if played by anyone other than Javier Bardem. Bardem lends the role enough creepiness to make a convincing mad genius with a serious score to settle with M.

Skyfall also distinguishes itself by weaving in some more personal elements of the master agent whose background was traditionally enshrouded by mystery. In setting a portion of the film at Bond’s childhood home, Skyfall offers a considerable glimpse into Bond’s pre-007 life and alludes to the tragedy that left him an orphan. Thankfully, we don’t learn too much.

It’s important not to underplay the entertainment value of the Bond franchise, and Skyfall incorporates many of the typical Bond-movie features that account for the series’ wide appeal. A lot of things do blow up, which is made possible by breathtaking special effects. The token Bond girl this time is Sévérine, played by Bérénice Lim Marlohe, and her role is little more than a showpiece. Bond does the inevitable globetrotting, though the sheer contrasts between bustling Turkish marketplaces, flashy nighttime Shanghai, and the lonely Scotland Highlands can be visually overwhelming.

Regardless of the repetitiveness, the Bond series has survived for 50 years, and Skyfall reminds us that it has no intent of slowing down. With Ralph Fiennes and Ben Wishaw likely to stay on for the next project, along with Naomi Harris as a sassy new Ms. Moneypenny, there’s a lot of promise for the upcoming films. James Bond will return, but with a better cast to hold him up.