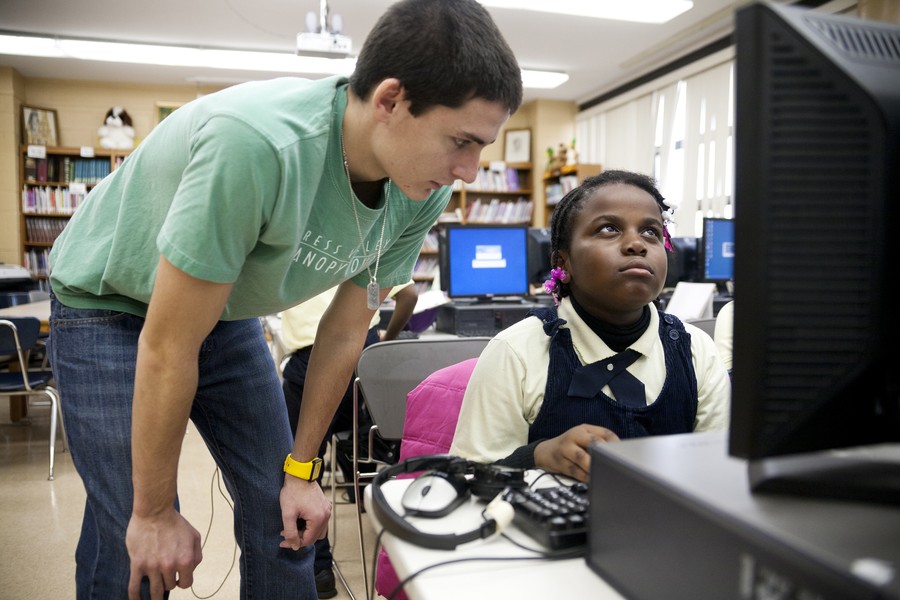 On most days, Maroon student-athletes wake up hours before class. They head to a morning practice or meeting or film review. They walk to Ratner with their book bags thrown over their shoulders and Chicago’s cold wind kicking in their faces, in order to learn about their sports, are a large part of their Hyde Park education.

But on mornings this fall, the University of Chicago men’s and women’s tennis teams have woken up to a different type of learning, one in which they aren’t behind desks, listening to lectures, but in front of students, doing the teaching.

The tennis teams have made the trek to Andrew Carnegie Elementary School on the South Side of Chicago the past few weeks, volunteering in classrooms that could use the help.

“I’m sure that after a couple of more weeks we’ll be able to see that it’s really, really profiting our students,” Andrew Carnegie Elementary School Assistant Principal Juanita Stem said.

The idea for the tennis teams to volunteer at a local elementary school came from first-year men’s and women’s tennis head coach, Jay Tee. Aside from tennis expertise and a winning background, Tee brings with him a tradition of doing good to the University of Chicago tennis program.

In coming to the University of Chicago, Tee took over one of the finest tennis programs in the country. The Intercollegiate Tennis Association preseason poll ranked the women’s team third in the nation and first in the Central Region. The men’s team was ranked seventh in the Central Region. But to Tee, collegiate tennis is about more than just trophies and a high GPA.

“We’re given so much as student-athletes that we should give back to the community,” Tee said.

With backed-up schedules since high school, full of the training and study sessions that got them to Chicago, rarely do student-athletes take time from their weeks to give back. But as Tee and his team are proving, it’s well worth it.

“This is the first time I’ve ever done outreach to community schools, so it’s definitely a new experience and definitely unlike anything I’ve ever done before,” second-year Maggie Schumann said. “I actually feel like I’m making a direct impact. I’m donating my time, my attention, and my care to kids.”

Schumann and her teammates have all spent time at Andrew Carnegie Elementary School this month. They are in the classroom during school hours. They help students with homework and teachers with grading papers; it all involves student learning.

Andrew Carnegie Elementary School knows them now; the tennis team is in classes from kindergarten all the way through eighth grade. Most assist with older students, but some even help special education resource teachers.

“The children are just the sweetest kids I’ve ever met. Every time I come in, they give me a hug,” Schumann said.

When Tee called Assistant Principal Stem about his proposal, Stem and the Andrew Carnegie Elementary School principal reached out to their teachers, many of which were interested in having the additional student help.

“The teachers absolutely love us,” Tee said. “Instead of being one teacher and 35 kids, they have five teachers now, and we break them up into four and help them with their math and spelling and government.”

Having student-athletes, and extra help, in the classroom goes beyond academics, however. Many of the kids at Andrew Carnegie Elementary School look up to the tennis team because they are University of Chicago students.

“Kids can always use a strong role model or inspiration to become something,” Tee said. “They see successful student-athletes coming from our school to help them, and they get to ask questions, see what’s possible. Hopefully it inspires somebody somewhere to start thinking about something bigger than just where they’re at.”

One of those inspirations is right in these students’ backyards—attending college. This goal makes it all the more fitting that it is Chicago students alongside teachers. Having achieved their dreams of attending a top-tier university and playing a sport, student-athletes offer the sort of advice that can help kids from Andrew Carnegie Elementary School achieve their aspirations.

“They really want to talk to me, because I’m a college student, and that’s cool,” first-year Gordon Zhang said. “I think that’s definitely a primary goal for all of these students—to obtain a college degree. I just want to tell them it starts right here. This is where you have to put in time for your work.”

Helping at Andrew Carnegie Elementary School has definitely been a two-way street for Maroon tennis players. They are gaining as much from their weekdays at the school as the students are, if not more.

“I think it gives them a good sense of accomplishment, a sense of purpose, and when they come back they all feel like they’ve done something other than just go to class or just play tennis. They feel like they’re part of something bigger,” Tee said.

Volunteering has helped the teams on the court because it has given them a project to bond over. Incoming first-years are no longer new faces, but partners in a project bigger than themselves. Teammates are more than friends, or tennis players, or even students during their time at Andrew Carnegie Elementary School. They are role models. But it is the combination of all these factors that makes their impact so powerful.

Assistant Principal Stem told me over the phone that teachers were familiar with extra bodies in the classroom, as they’ve received help from student-teachers in the past, including some from UChicago, but when I asked if the Maroon tennis teams were the first athletic program to help, her voice lit up.

“It is the very first athletic team. I think it’s great because their experience is just totally different from the realm of the educational major,” Assistant Principal Stem said. “Academics and sports go together really well, and it helps make well-rounded students, so the fact that they are bringing in their athletic intelligence and fusing that in with the academics, I think is working great.”

With only good coming from volunteering at the local elementary school one thing is clear to Tee: this community program is here to stay. And if he can help, it’s here to grow, too.

“I want this to last years and years, as long as I’m here; and I want it to expand so that it’s not just the tennis teams. Hopefully other teams in the department start taking notice and we can have a really good relationship with not just one elementary school, but four or five around here,” Coach Tee said. “That way we can really start doing some good on a larger scale.”

Schumann agrees with her coach, “I highly recommend that other teams do it. I know that some kids are like, ‘Oh, we’re so busy with athletics and academics,’ but, honestly, it’s really not a big time commitment, and you really feel it.”

Even with grades, wins, and of course training at the top of every athlete’s agenda, a little help to those who need it can go a long way. And it is precisely their experience as student-athletes that makes mentorship from UChicago men’s and women’s tennis players that much more meaningful.