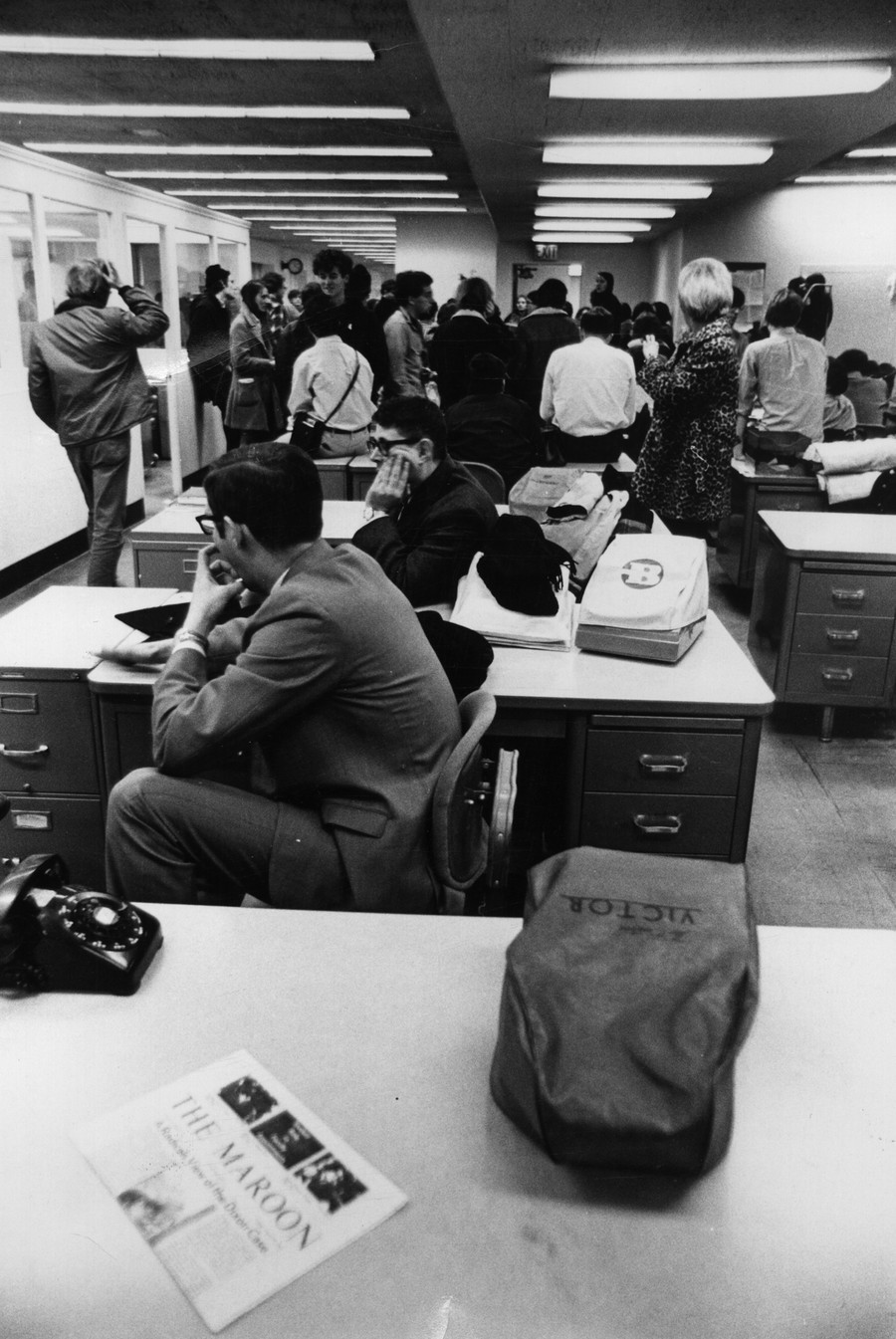 Dozens of students face expulsion from the University as a result of charges lodged against them at the administration building sit-in.

Charles O’Connell, dean of students, said in a statement yesterday that the University will take disciplinary action against students involved in “disruptive” actions. He said the action might include expulsion.

An ad-hoc student negotiating committee said at the captured administration building last night that they have not changed their demands despite the University’s statements.

Acceptance in principal of equal student participation in faculty hiring and firing.

Full compensation for University employees who could not work because of the demonstration.

Some fifty students marched from campus at 11:00 pm to the University Ave home of President Levi to give him an enlarged copy of a student summons. he was asked to appear in one hour at Eckhart hall for a disciplinary hearing on charges of participating in a disruptive demonstration.

Occupants of the house refused to open the door.

Approximately 400 students seized the administration building yesterday at noon. The decision to occupy the administration building was made at a meeting Wednesday night attended by more than 500 people. Students participating in the sit-in spent most of the afternoon organizing on all six floors and setting up some basis by which they could carry out discussions. Basic issues raised were the amnesty proposal, control of the press, and communication with faculty and administrators in the ad building.

Wednesday night students planning the sit-in decided to attempt a tactic of “non-violent disruption.” Included in the decision was an agreement not to enter files in the building. Later that afternoon, however, students did force their way past a locked partition blocking the northern wing of the second floor. Security guards stationed there claimed that following instructions, they did not use force against the students who pushed past them.

Occupation of the building began at noon yesterday as planned. Despite rumors that the University would lock the administration building, students were able to enter and crowd on the first floor and the registrar’s office there.

This is the disciplinary warning issued by Dean O’Connell, at 12:30 Thursday, calling the action “disruptive.”

“A determination has been made that the actions in which you have engaged constitute an improper interference with the normal functioning of the University and are disruptive.

“This determination has been made after consultation with the members of the Committee of the Academic Council of the University.

“I concur this finding.

“Participation in such disruptive acts will subject the participants to disciplinary measures, not excluding expulsion.

“This notice constitutes an official request that all students discontinue participation in this demonstration and disperse immediately.”

It was then announced that students would have ten minutes to vacate the building. This was not done and administrators started issuing summonses to students to appear to be arraigned for a hearing with the disciplinary committee.

Many students refused to give their names to administrators who attempted to give them summonses. Student reactions to summonses included statements such as “Rip up those summons; they can’t do a damn thing,” and “Eat them.” At least one student burned his summons....

Throughout the day, students in the building were concerned about the presence of police. Uniformed security policemen were present at all times but had instructions not to interfere with demonstrators unless they started to molest University property.

At approximately 3:45 University police attempted to lock the outside doors to the ad building. Captain Delaney, director of the University security force, said that this was the standard procedure when the employees leave the building. Students protested this action and eventually police left the doors open, although they said that they would check IDs of all persons entering and leaving the building....

Outside the administration building, leaders from inside addressed a crowd of approximately 800 standing in the quads, persuading them to join the demonstrators. “We’re asking you,” one student demonstrator said, “not to cooperate (with the administration), not to accept summons. We need you inside.” One speaker opposed to the sit-in addressed the crowd and said, “I fail to realize why those who don’t like the University don’t leave.”

(Original article too long to print in entirety)