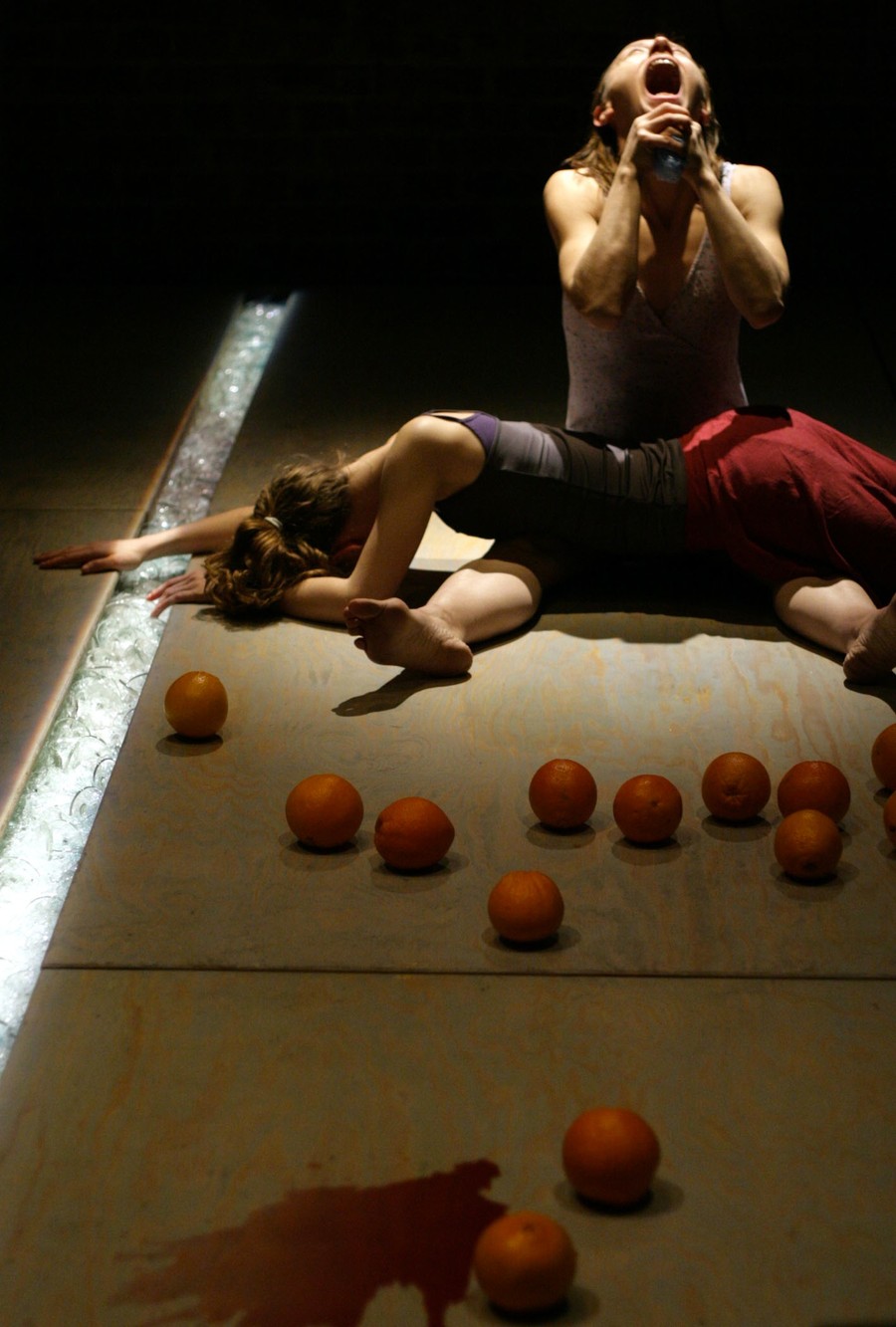 Company members give birth to a new type of theatrical beast.

Teatr Zar, the latest group to grace the Museum of Contemporary Art’s stage, believes in a theater of language. The troupe’s manifesto states that Teatr Zar goes through “a long creative process in making theatrical language based on music,” for “theatre is something that, above all, should be heard.”

Their three-part production, The Gospels of Childhood Triptych, certainly explores sound and new theatrical language. Indeed, it does more than that—it dives into right and wrong and into a scrutiny of constraint in structured societies.

Teatr Zar formed in Poland between 1999 and 2003 and, from the outset, collected musical material from obscure locations like the Eastern European country of Georgia. Working in this way, the group amassed a core of old polyphonic songs, then used them to form the primary components of its current production of Triptych. The work takes the form of a sort of medieval mystery play in which the dialogue and music bear Biblical themes. Teatr Zar is thus intimately concerned with examining music’s distant past, a process which heavily informs the group’s production and the unique language.

Since it conceived Triptych, the group has worked tirelessly to perfect it for performances around the world. However, the new theatrical language that Teatr Zar sets forth is dense and hardly colloquial enough for the audience to decipher. The production finds meaning in minutiae, which makes watching the show both an exciting and taxing experience. Many minutes of the show are filled with exploring the wax of a candle or the curve of an orange. This method can grow exhaustingly detailed. Still, the musical language of Triptych is accessible in that it refers to primitive human experience and unleashes “the song that lies within,” as their manifesto explains.

Triptych is composed of three parts, each of which is meant to be viewed individually. In other venues, the portions have been performed separately, and it is easy to see why. Part one, “Fragments on Intimations of Immortality from Recollections of Early Childhood,” recreates the story of Martha and Mary using the Gnostic Gospels, a group of texts deemed unfit for inclusion in the Christian Bible and purportedly written by such figures as Mary Magdalene. The story of Triptych examines religious rites and the sometimes gender-related pains of structured religion. All the chanting in this portion is derived from the ancient songs that Teatr Zar discovered through their research. Candles and mirrors are placed onstage to literally reflect the world and give the performers a platform for discussion.

The second part of the performance is much more cohesive than the first, despite its dismal title, “Caesarian Section: Essays on Suicide.” The plot focuses on two women struggling against oppression and death in modern times. The women feel that there is no way to escape the clever lighting design and a line of glass down center stage that together comprise the rigid world’s structure. Eventually, the women try to subvert the system by harming themselves. The audience reacted much more positively to the second section, which served to elucidate the first part somewhat: Modern realities reveal solutions to historical problems. This act is more realistic and features modern music, adding to the drama’s potency. The section is also marked by a strong focus on images and props, like chalices. Near the end of the act, each woman spilled a glass of wine on the stage and shrieked to communicate her agony.

The work’s final portion, “Annhelli: The Calling,” pictures the end of life as a final struggle against the giant “drape” of heaven, which is literally a drape. The drape falls on the characters and smothers them to death. In this landscape of wretchedness, a glimmer of hope emerges, for once the “sky” has fallen, the audience sees that it was only a cloth after all. It also becomes clear that the line of glass is made of small, easily separable pieces.

“I perceive life as music, to which one listens for the remnant sounds of the primordial explosion.” said Jaroslaw Fret, the company’s leader. Teatr Zar’s mysterious, melodic play asks powerful questions about life, death, and what may lie above, and provokes the idea that life is a primitive dance.