Kushner's epic dramatization of America anguish comes to the South Side. 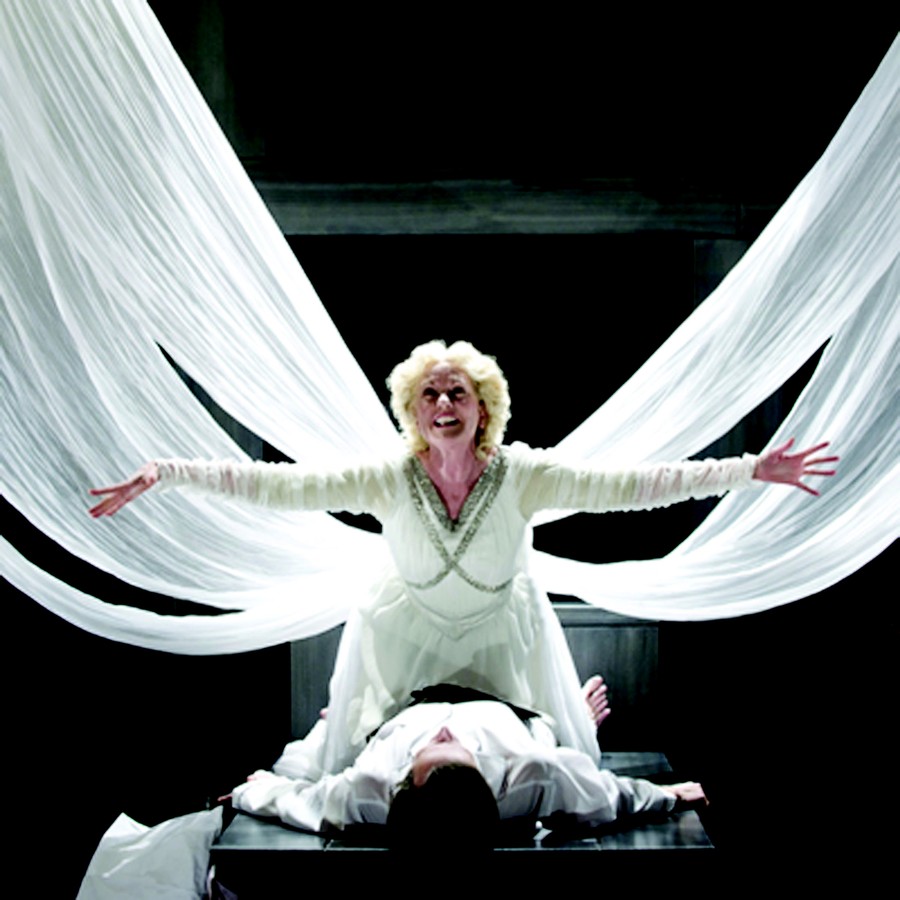 Virginal eyes beware: Angels in America does not skimp on flashing skin, naked butts, and more-than-suggestive body movements. Clocking in at seven hours total it is not for the faint of heart. But Tony Kushner’s famous two-part play never was for the sexually squeamish, anyway. In this third collaboration between Artistic Director Charles Newell and Tony Kushner, Court Theatre delivers a production that is true to the spirit behind Kushner’s phantasmagoric story of angels, AIDS, Mormons and Valium.

Set primarily in New York City in 1985, the play is interspersed with flashbacks and fantastical figures that imbue the piece with a sense of mythology and grandeur. Though a strong political message runs throughout the play, since there’s an emphasis on the AIDS epidemic, the characters transcend historical events, ultimately achieving timelessness and universality. Kushner is said to have once told Newell, “I wanted to write about being alive in the here and now.”

That all sounds very Zen, but how does Kushner’s vision play out at Court? And what does it mean to be alive in the here and now?

Part of bringing life to Angels in America is the stage magic. The minimalist set is flexible enough to contain the lives of all eight characters and keep the focus on the particular person or people we’re supposed to be concerned with at the moment. Cut loose from clunky bearings, the sparse staging enables the actors to boldly embody their characters.

Prior—the disease-stricken man burdened with visions of the future—has a huge presence in the plot, and could even be considered the protagonist. But it was Eddie Bennett as Louis, and Michael Pogue as the effervescent Belize, who best held my attention during the performance. Louis is endearing yet vexing, a little lost, filled with grandiose ideas and guilt. His self-hatred, though, ends up inspiring more sympathy than disgust. Pogue is a versatile performer who fluctuated with ease between majesty and sassiness, and conjured some priceless facial expressions to boot.

Each of the sordid subplots is hyperintimate, each role packed with such personality and energy and sadness, it’s impossible to think of Louis as a coward for not being able to handle Prior’s illness, or to think of Belize as a one-dimensional confidante and pal who meets all crises with unwavering faith and a swish of his lean hips.

The play also demands immense flexibility from every actor, since each plays at least two roles. The scope of the play and the multitude of characters lend a richness to the play that might not otherwise be expected from an eight-member cast.

In one scene, Prior dreams of waltzing with Louis underneath the stage’s blue lights. But the fantasy is cut short when after a few sure steps, Prior finds himself on the floor with a hurt leg—a moment of true human frailty and vulnerability. This same sense of delicacy is echoed in the scene where Belize drops his French and his sass to tell Joe, “I’m trapped in a world of white people. That’s my problem.” Or when Prior bitterly says that Louis “can’t handle bodies” after he comes to Prior with visible bruises.

Kushner’s vision is 20/20, but Newell and his cast had blind spots. The Angel’s performance was often melodramatic and frenzied, rather than dignified. Her lack of wings was a missed opportunity to imbue her character with additional celestial panache. Joe, meanwhile, often seemed full of a hesitation that came more from cowardice than caution.

Despite of tiny flaws in the production, Angels in America elicited waves of laughter, sighs, winces, and groans. Even if you don’t find religion, politics, or history particularly intriguing (and I’m guessing most of you do), the show is definitely worth going to see. For those seven hours, the whole world is concentrated onto one little black stage.