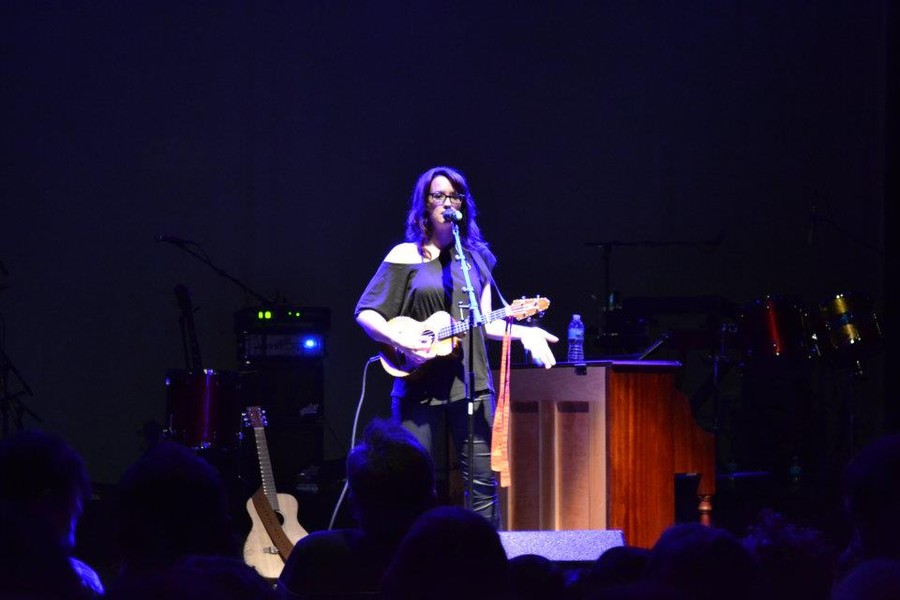 I’m pretty sure the first thing I said when the music stopped and the lights came back on was “I wish I could be best friends with Ingrid.” “Ingrid,” not “Ingrid Michaelson,” because, after that performance, I felt we could be on a first-name basis.

On Thursday, April 12th, the day I had been anticipating for about three months, Ingrid Michaelson lit up the stage at Belmont’s Vic Theater. It takes about 50 minutes to get there from Hyde Park. The doors opened at 6:30. We left at 5:00. God forbid we were a minute late and didn’t get to be in the front row.

When we got there (a good 40 minutes early), we were disappointed to see that some even more obsessed fans had made it there before us. Disgruntled, we claimed our spot in the middle of the floor.

After a while, the opening act, Pearl and the Beard, came on. What first caught my eye about this three person group from Brooklyn, New York were their outfits. The two girls were wearing bright dresses toeing the line between hipster and ‘50s working girl. The one male member was dressed in a flannel shirt and sported curly hair that went in some pretty unanticipated directions. All three members had matching black hipster glasses. It was cliché with a twist.

The band played a number of instruments including the drums, cello, harmonica, and guitar. Each member also sang. Although at times they were earsplittingly loud and their lyrics unintelligible, their sound was unique.

And then it happened: the first glimpse of Ingrid. In the cutest possible way. One of the Pearl and the Beard singers forgot his bottle of water and she pranced on stage and brought it for him. She was met with roaring applause.

After the opening act, there was a half hour wait until Ingrid Michaelson’s set. I took this time to look around at the people around me. It was quite the diverse gathering of people. There were pre-teens in matching Ingrid Michaelson shirts, there were elderly couples sitting in the VIP section, a grandmother in an ornamental hat frantically looking for her granddaughter, and young adults galore.

And then, the lights dimmed, and her band members took their places on the stage. The opening chords to “Fire” came on. Ingrid ran in and started singing. The high-energy song had every audience member singing along.

She stayed true to her “adorkable” persona throughout the concert. She was wearing a black cut-up t-shirt with leather pants and black wedges along with her signature glasses. Between songs she would talk to the audience, letting her sharp sense of humor shine.

Before the song “Blood Brothers,” she recounted the story of her experience singing, or, rather, lip-syncing, the song at the Macy’s Thanksgiving Day Parade in New York. She stood on a float in a huge puffy coat lent to her by Armani, parading through the streets of New York along with Avril Lavigne and Cee-Lo Green. No one knew who she was, she claimed, not even the host of the show, who announced her as Ingrid “Mickelson.” When it was her turn to sing, the track came on, and she started lip-syncing. Half-way through the song, the float jolted to one side and she lurched over, losing her balance, and, as a saving grace, pointed to the little boy dressed as a fireman on her float, saying, “And here he is!”

She laughed it off, and it made her seem all the more endearing. She told several similar anecdotes throughout the night; usually, she had some interjections after every song, but they were more than welcomed by the audience. She talked in an awkward, yet down-to-earth, way, stumbling a bit when she spoke and showing her sarcastic side. This side of her juxtaposed nicely with her romantic lyrics and sweet, gentle voice; the concert showcased Ingrid Michaelson, the person, as well as the singer.

She played a mix of high-energy songs and classic ballads, sometimes with the entire band and other times by herself just with her piano or ukulele. She dedicated “The Way I Am,” the song that made her famous but also the song she hates so much she wishes she could “throw [it] down a well to be eaten by a rat and die a slow painful death,” to everyone in the audience.

When she announced that she was about to sing her last song, the audience shouted in protest. Then she assured us that after this song she and the band would bow and leave the stage. Once the audience applauded for more than 30 seconds (it doesn’t take more than that, she said, because “we’re easy”), they would come on stage, “completely surprised,” and play some more. When they left the stage the audience roared for well over a minute, and they came back on stage looking stunned. They played three more songs, one of which was “You and I,” my personal favorite, which each band member sang, in turn, to the sound of Ingrid’s ukulele.

When the concert was over we were all left with a signed CD and a huge girl-crush. All we wanted was to be friends with Ingrid. Not only is her music beautiful but her personality is so charming and endearing that you can’t help but want to be friends with her. The concert made me love her even more than I had before, which was already pretty excessive; just ask my neighbors.