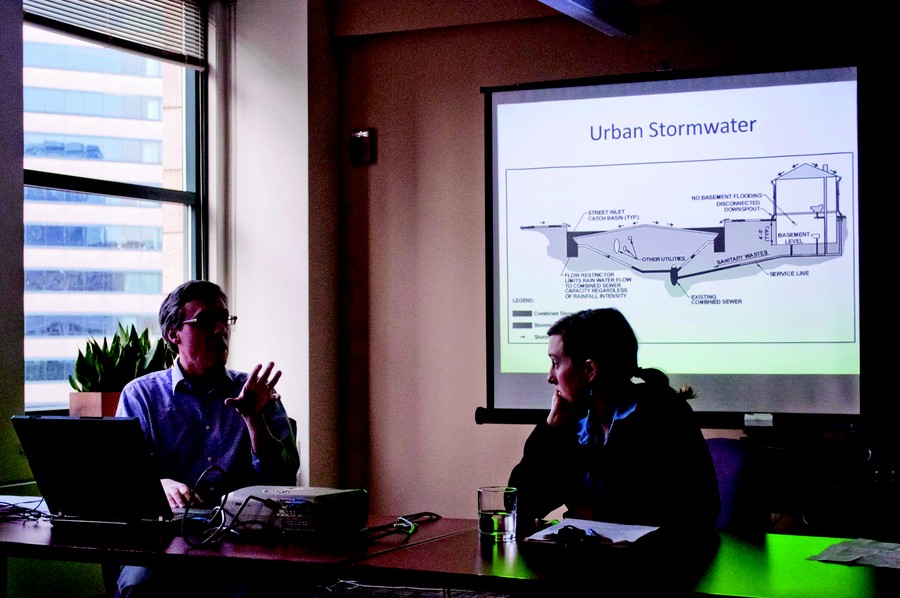 A panel of local conservation experts addressed the need to conserve water and the negative effects of privatization of public utilities at the Environmental Law and Policy Center downtown on Tuesday. The talk was organized by UChicago Students Against Bottled Water, along with allies from Loyola University and Columbia College.

Chicago’s water comes from Lake Michigan, a larger and less immediately threatened source than the groundwater sources on which many other communities depend, according to Aaron Durnbaugh, director of sustainability at Loyola.

“We are sitting in probably one of the most envied positions globally with [the Great Lakes] at our doorstep,” Durnbaugh said.

This abundance, according to Tom LaPorte, Assistant Commissioner at the Chicago Department of Water Management, has its drawbacks. “It’s very hard to persuade people that this is a big issue here,” he said.

LaPorte noted that residents are not motivated to conserve water because the resources proximal surplus makes prices “unrealistically low.” However, the average depth of Lake Michigan will drop about a foot and a half over the next century, according to Durnbaugh, making conservation increasingly important.

LaPorte said that one way to conserve water is to install a water meter in private homes. Water meters measure the amount of water consumed in each household and charge the residents for that amount. Without one, water bills are calculated by an “arcane” formula, LaPorte said. Water meters would provide an incentive for individuals and households to conserve.

The city installs water meters in homes for free, and all residents that have added them have seen a decrease in the cost of their bills, LaPorte said. However, according to LaPorte, Chicago is the last large city in the country to not mandate the use of water meters.

Emily Carroll (A.B. ’08) of the consumer advocacy group Food and Water Watch spoke about problems with privatization. Private companies are obligated to shareholders, not citizens, she said. Based on the cases she has seen, water system privatization has come with an increase in prices without improvement in quality. Companies also generally spend less money on water infrastructure than governments do, she said.

While LaPorte said that there are no plans for privatization in Chicago, Carroll is currently lobbying against an Illinois bill that would “guarantee” an increase in privatization. The bill ensures profits for companies that buy water systems, even allowing them to raise prices on customers in one community in order to pay for the purchase of a water system in another.

Fourth-year Lauren Tarpey, the primary organizer of the event, said she and students at the other schools held the panel in recognition of World Water Day, which was March 22. “Because of the work we do, we believe water is a public right,” she said.

UChicago Students Against Bottled Water works to educate students about the hazards of water bottles and is responsible for the hydration stations around campus, among other projects.