When trouble calls, 'The Receptionist' picks up 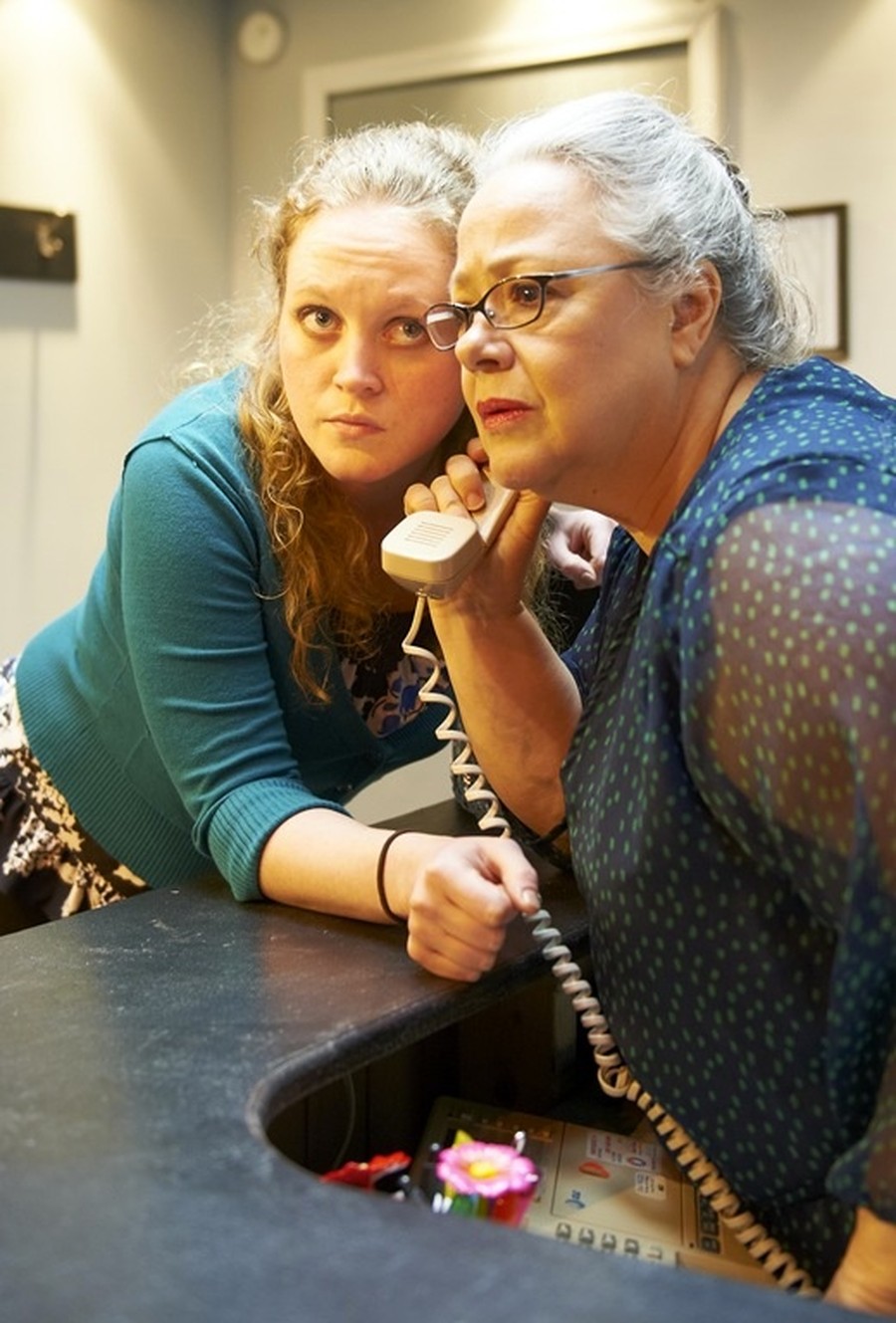 Courtesy of the Steep Theatre

Illuminated by a single spotlight, a trembling woman weeps with the knowledge that painful torture looms in her future—for a performance that begins with jokes and clever parodies, The Receptionist takes a morbid turn. Friday night’s audience at Steep Theatre had award-winning playwright Adam Bock to thank as they exited the tiny auditorium feeling a bit confused as to what exactly had just taken place before them. However, despite the show’s sudden, jarring transition from amusing, over-the-top comedy to intense drama, it is nevertheless smartly written and skillfully performed.

The production, directed by Steep Artistic Associate Joanie Schultz, cleverly portrays the follies of a traditional cubicle-filled office through the outlandish exploits of its receptionist, Beverly (Cheryl Roy) and her young female co-worker, Lorraine (Caroline Neff). An incessantly ringing phone and Beverly’s warbling greeting punctuate conversations loaded with gossip about friends, pens, narcissistic lovers, and teacups. But the entrance of Mr. Dart (Peter Moore), a charming visitor from the Central Office, catalyzes a cascade of events that are at one moment flirtatious, at another sinister. Uneasiness seeps into the office scene as the audience learns that the seemingly normal workplace is in fact involved in an intelligence operation that seeks to extract information from “dangerous” individuals in order to prevent them from committing crimes beforehand. Upon learning that Mr. Raymond (Peter Esposito), the office boss, has vanished, a state of chaos ensues that continues through the end of the performance. The final, arresting scene, a culmination of this intense chaos, is as puzzling as it is somber.

Though the story itself is clever and its development well-crafted and engaging, the most powerful aspect of the play is the performers themselves. Cheryl Roy, the standout cast member, embodies the chirpy-chatty role of front-desk receptionist with fantastic accuracy and humor. Deftly keeping the audience in continuous fits of laughter for the first half of the production, she shifts seamlessly into the more serious mood of the second half, confidently leading everyone—both the cast and the audience—along with her. Though the rest of the four-person ensemble displays impressive skill, Roy most certainly steals the show.

Stephen Harold Carmody’s perfectly designed set is a consummate backdrop for a performance most memorable for its witty accuracy. The framed picture of Mount Rushmore, the coffee table, the inspirational quotes plastered across an almost maddening expanse of beige, and all the gossip and nit-picking within—everything perfectly evokes the stereotypical office space. The precision of the resulting tableau is hilarious for its almost unsettling reality.

The Receptionist offers a strong cast of characters and images that prove undeniably entertaining, if not particularly fluid. Though the story feels a bit disjointed, and the transition from amusing to tense a bit too abrupt, the individual talents that make up the whole are certainly laudable. And although this production’s starkness was not quite enough to make me a follower of the theater company, the Steep’s refreshingly intimate atmosphere, hard to find among the bigger, better-known theater companies, will certainly be a draw.