Déjà vu all over again: Maroons walk off on Senior Day 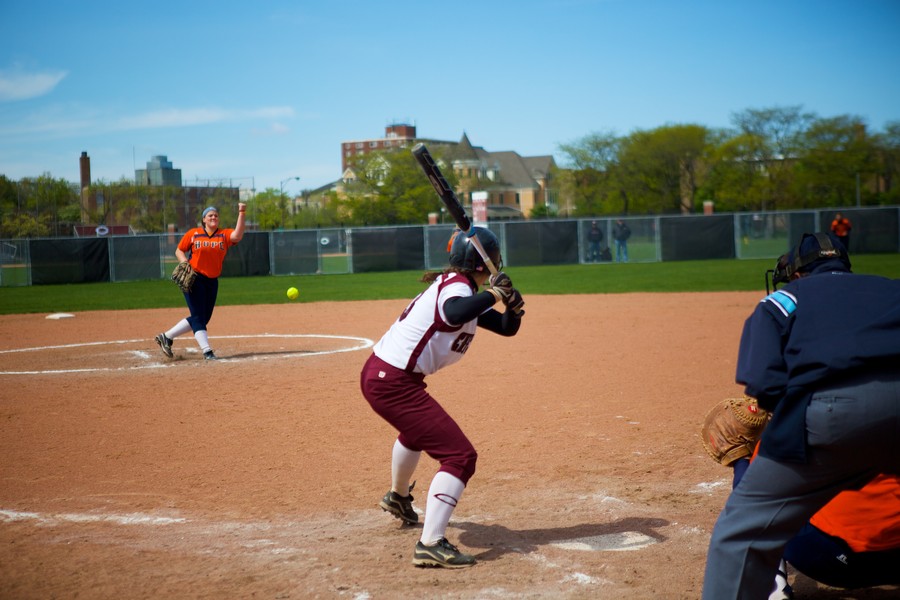 Playing against North Central (21–8), Chicago (24–9) walked off 2–1 on fourth-year Julia Schneider’s solo home run to lead off the bottom of the 11th inning. The second scheduled game was rained out.

“Julia’s home run was a fitting end to the game following that [Schneider and fourth-year Liz Payonk] accomplished on defense to hold North Central throughout,” head coach Ruth Kmak said.

In a game highlighted by mistake-free pitching and active, aggressive defense, both teams managed to capitalize on errors early in the game. Payonk put the Maroons ahead in the first inning, driving in second-year Kaitlyn Carpenter on a fielder’s choice after Carpenter reached on an error and stole second.

The Cardinals managed to knot the game at one in the fourth inning, when senior Mary Caron reached on an error and came around to score unearned.

For the next six innings, opportunities passed for both teams, as third-year Chicago ace Kim Cygan (14–4) and North Central’s sophomore pitcher Vlasta Mangia (16–14) forced ball after ball into the teeth of the defenses.

“North Central is a team that always plays us well,” Kmak said. “They play defenses that are ‘unorthodox,’ and each coach utilizes steals, squeezes, and anything else that can push a run across or force the other team to make an error.”

Both pitchers seemed more than willing to use their best stuff to extinguish threats. Cygan ended North Central’s sixth and seventh innings with strikeouts, while Vlasta erased one of the Maroons’ best opportunities in the ninth inning by striking out a pair of batters after first-year Rachael Cloud reached second base.

“The uncertainty [in the extra-innings] was easy because of the confidence I have in our hitters and defense,” Cygan said.

The extra innings saw both defenses make big plays for their pitchers. In the 10th, Payonk cut down a Cardinal base runner with a solid throw to home plate. North Central took advantage of the Maroons’ aggressive base-running to get a double play on a fly ball with Tabettha Bohac primed to score at third base.

Capitalizing on a perhaps increasingly weary Mangia, who pitched the entire game for North Central, Schneider ended the game with a drive over Stagg’s shallow centerfield fence—her first home run of the season. The walk-off homer echoed Chicago’s senior day from last year, when Sara Whaley homered in her last at-bat for the Maroons.

But the South Siders aren’t saying goodbye to their seniors just yet. After ending their season on a five-game home winning streak, during which they’ve won nine of 11 overall, they stand at fourth in the NCAA’s Great Lakes Regional rankings, with a strong chance—but no guarantee—of being invited to postseason play. Chicago will hear from the selection committee on Monday.

If the Maroons do make the playoffs, they’ll be ready to perform. “Our approach starting a couple weeks ago was that a win is a win,” Kmak said of her team’s recent drive to succeed. If they don’t, though, what’s a better end to a regular season than a walk-off homerun by a fourth-year on Senior Day?

“It was great to get that win on the day we were honoring all [that our seniors] have done,” Cygan said. “Our three seniors have contributed so much to the program and have been great leaders for us all year.”