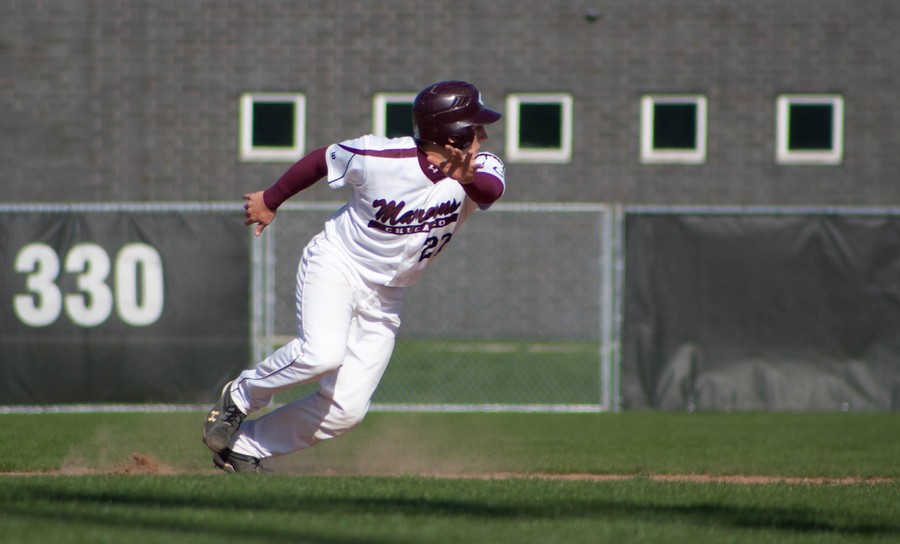 Watching this squad of Maroons (22–12), there’s always one element that stands out—win or lose, rain or shine. They hustle. Even in a rainy 7–2 loss to North Central (20–14), they were off the field almost immediately after they’d made the third out in the defensive half of the inning, and their own batters were back in the dugout before the ball had even made it back to the pitcher.

This energy, evident even in a loss, has helped the South Siders all season. Now, with the season winding down, they need to translate it into wins in their two remaining games this season.

That said, they dropped a winnable game to North Central on Tuesday. The Maroons struck first, scoring two quick runs in the bottom of the first inning. Fourth-year catcher Stephen Williams’s two–RBI double with two out gave the squad an early 2–0 lead.

As North Central’s starter Ryan Klein got into a groove, the two runs stood up as Chicago’s only scoring of the afternoon.

In terms of their own pitching, Maroons second-year starter Alex Terry, who channeled Cliff Lee with a 10-inning outing last time out, looked a little more like Joe Blanton this time out. His pitching was average, or maybe a little below, and his team couldn’t pick him up.

Terry (4–3) gave up five runs—four earned—over seven innings, striking out one. Chicago couldn’t get a rally going after the first, managing only three hits over the remainder of the game, none of which came in the same inning. The game didn’t last the full nine innings because of steady rain; it was called in the top of the ninth.

A rainout on Wednesday against Rockford meant the Maroons must wait until Sunday to get back on the winning side of things.

But there is still hope for the Maroons, and even good news.

Second-year starter Claude Lockhart was named UAA Player of the Week following his pitching performance last weekend against Eureka. It was the second straight week he had received the honor.

Other UAA accolades came in this week as well. The All-UAA first and second teams were named this week, and six Maroons made the cut. Third-years Jack Cinoman and JR Lopez were named to the first team, along with Lockhart. Second team honors went to second-year Ricky Troncelliti, third-year Steven Schwabe, and fourth-year Stephen Williams.

Chicago will attempt to capitalize on their recognitions and showcase their talents in their final home game of the season this Sunday against the Carthage Red Men (19–16).

“The game against Carthage is extremely important,” second-year Ricky Troncelliti said. “They are a solid team and we need a win to help our playoff chances. Plus, with it being senior day, we want to get a win for them.”

First pitch against the Red Men is scheduled for 1 p.m. Sunday at J. Kyle Anderson Field.