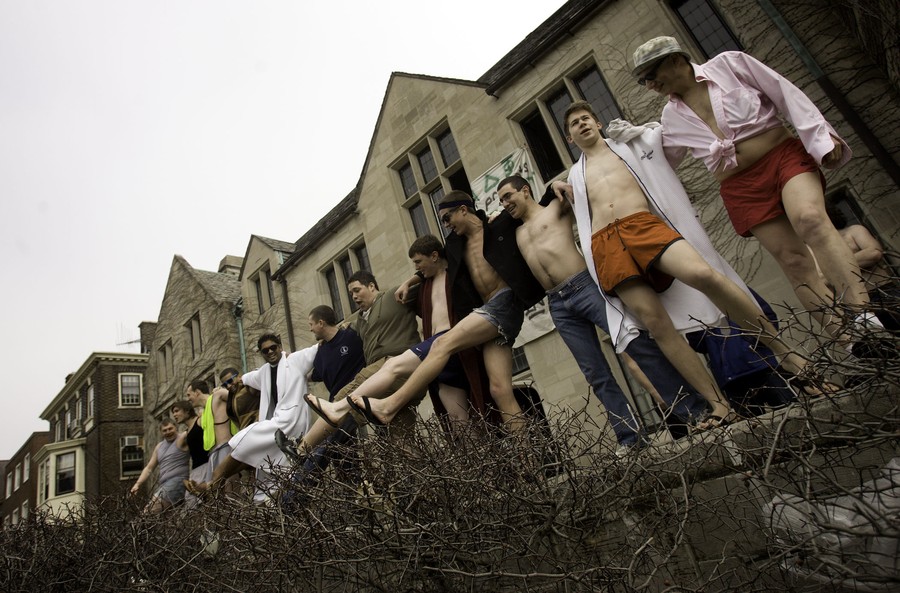 Combined, there are over 20 fraternities and sororities on campus. That may be around 20 more than you (and we) expected, especially in a campus where only 10 percent of undergraduates goes Greek, but the truth is more subtle than statistics. Student life isn’t Animal House, but Greek life plays a seriously dynamic role in the social scene of the College. Its main impact on the wider community is in two distinct yet often overlapping areas: parties and philanthropy.  Especially among first and second years, the weekend’s most visible and advertised social event is invariably a frat party: an amalgam of red Solo cups, sticky dance floors, pulsating music, and pseudo-romantic rendezvous. These parties grow old and the crowd tends to repeat, which explains the usual absence of upperclassmen. The various philanthropy events, however, break the monotony and draw a greater range of students.

Those are the broad strokes. For frats in particular, there isn’t exactly a dearth of options. For starters, you have the old guard—those majestic, multi-story stone buildings that line South University Avenue on the eastern edge of the quads. Here you’ll find party favorites like Psi Upsilon, FIJI, and Delta Upsilon. Along with Phi Delt and Alpha Delt, these fraternities are among the oldest at the U of C, and enjoy consistent popularity due to their proximity to campus and large, historic, beer-bathed houses. They by no means represent a “top tier,” though; especially in recent years, there’s been an ever-expanding cluster of new fraternities competing for recruitment. Frats like DKE, AEPI, Sig Ep, Sigma Chi, and Lambda have all become attractive options, and Delta Tau Delta and Zeta Beta Tau, which gained campus charters just last year, have already attracted droves of recruits.

On the sorority side, the majority of recruitment is done by the three main sororities of the Panhellenic Council—Alpha Omicron Pi (AOPI), Delta Gamma, and Kappa Alpha Theta. This trinity consists of the most visible sisterhoods on campus, notable especially for their annual fundraisers: AOPI’s Valentine’s Day Rose sale, Gamma’s Anchor Slam, and Theta’s Mr. University event.

There’s also a host of sororities that are part of the Multicultural Greek Council, which works to engage underrepresented student communities. These include Alpha Kappa Alpha, Lambda Pi Chi, alpha Kappa Delta Phi, Alpha Phi Alpha, Lambda Theta Alpha, and Sigma Gamma Rho. Those names mean nothing to you now, but if you’re compelled by a strong group united by intimate friendships and community service, take some time to research them. You’re likely to find a good fit given the multitude of choices. And for those looking mostly to engage with the wider community, there’s always the campus co-ed service fraternity, Alpha Phi Omega, once sponsored by the one and only Michelle Obama.

But take these pointers with a rather large grain of salt, as they’re made from the outside looking in. If you’re entranced by the idea of a close-knit community, a band of brothers or sisters with varied interests and accomplishments, then pledging or rushing may well be the best decision you make this year. On the frat side, brothers tend to keep to themselves, and they form genuine friendships that endure far beyond graduation. It’s the same with sororities, and such groups raise thousands upon thousands of dollars for important organizations like Red Cross, Chicago Lighthouse, and Court Appointed Special Advocates (CASA). Despite the slightly cliquey aura that frats and sororities inevitably exude, there’s really no superiority complex involved (besides the oft-obnoxious sweatshirts, bags, and various assorted merchandise with 400 pt. font insignia).

Put simply: If Greek life isn’t your thing, then it won’t even figure in your life. You may indulge in some weekend bacchanalia at DU, but let’s be honest—you won’t remember that.  Rush week comes and goes without any significant fanfare. Greek life is a self-selective business, and each fraternity and sorority has a distinctive identity that can’t be described in a pithy one-liner. Meet the brothers, meet the sisters, and if you like them, go for it. Otherwise, indulge in the dimly lit wonders of Bar Night, Heaven and Hell, or any one of the strangely-themed parties that will inevitably become your go-to nightlife in Hyde Park.