Chicago comes up (just!) short in pair of UAA contests 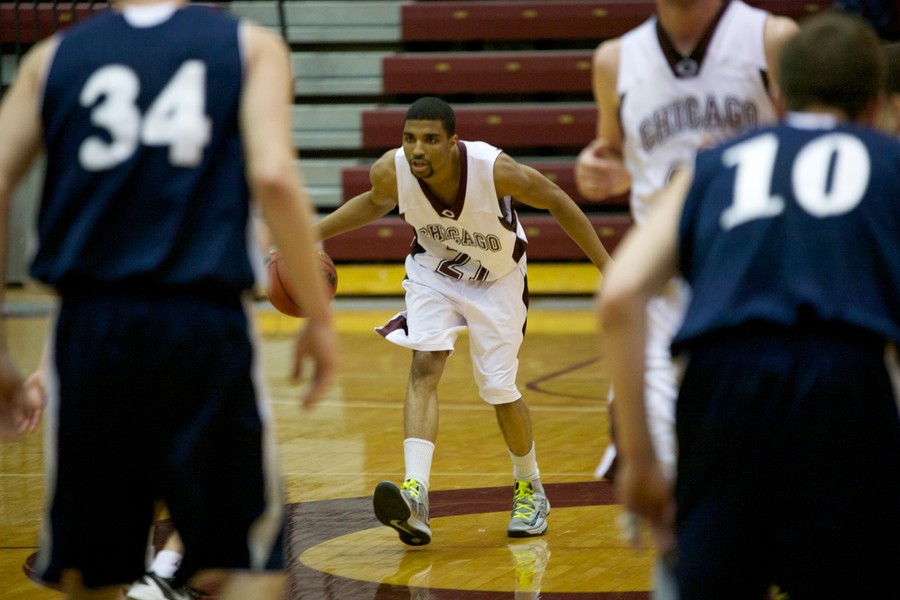 The Maroons had two comebacks this weekend. Unfortunately, neither was enough to seal a victory for Chicago. The Maroons lost to the Case Spartans on Friday 64–61, before getting edged out by the Carnegie Tartans 75–74 on Sunday.

After trailing by 16 points just minutes into the second half of Friday night’s contest at Case, Chicago brought a new level of defense to the game.

“We just picked up our defensive intensity, and we closed up the space on their shooters because in the first half, they really shot the ball well,” third-year forward Sam Gage said.

Case still managed to shoot 50 percent from the field in the final 20 minutes. But the Maroons went on a 12–1 scoring run with 9:23 left in the game to tie the contest with just over two minutes left on the clock.

The Maroons missed three shots from beyond the arc in the final minute to seal the 64–61 final.

Even though Sunday’s game in Pittsburgh featured a Carnegie team that was 0–6 in UAA action going into the match, traveling for three days straight took its toll on the Maroons. But that was not an excuse.

“The biggest challenge on the Sunday games, especially away ones, is to bring a level of energy that’s going to allow you to win that game and compete with other teams,” Gage said. “They’re already going to have some level of energy that comes with [playing at home]. You’re going to have to be able to beat that just as the opposing team who’s been on the road for three days. It’s something you’ve got to do in the UAA if you want to be good.”

After a back-and-forth first half, the Tartans were up 33–30 at the break.

The Tartans found themselves up by seven points with 7:44 left in the game. Chicago then went on a 6–0 run to cut the lead to one.

With seven seconds left in regulation and the Maroons down by three (66–63), Chicago called a timeout to design a three-point attempt.

“I would get the ball at the top of the three-point arc and would look to pass to [second-year guard Alex] Pyper on the left wing,” third-year forward Charlie Hughes said.

Unfortunately for Hughes, Pyper was not open and the third-year had to take the three himself. Luckily, he banked the three-pointer off the glass to send the game to overtime.

Overtime was a back-and-forth affair until, with eight seconds left, Asad Meghani made a floater to seal the win for Carnegie.

While the Maroons’ chances at a postseason bid or UAA championship are dwindling, Gage said that the Maroons still look to improve this season.

“You just really want to keep getting better every day, try to win as many games as you can this year, and then you don’t want to look too far in the future, but this is our team for the next year or two,” he said. “You don’t want to have any more weekends where you’re taking steps back, where I think there were times this weekend where that was definitely the case.”

Up next, the South Siders take on Case and Carnegie again this weekend, this time at home.