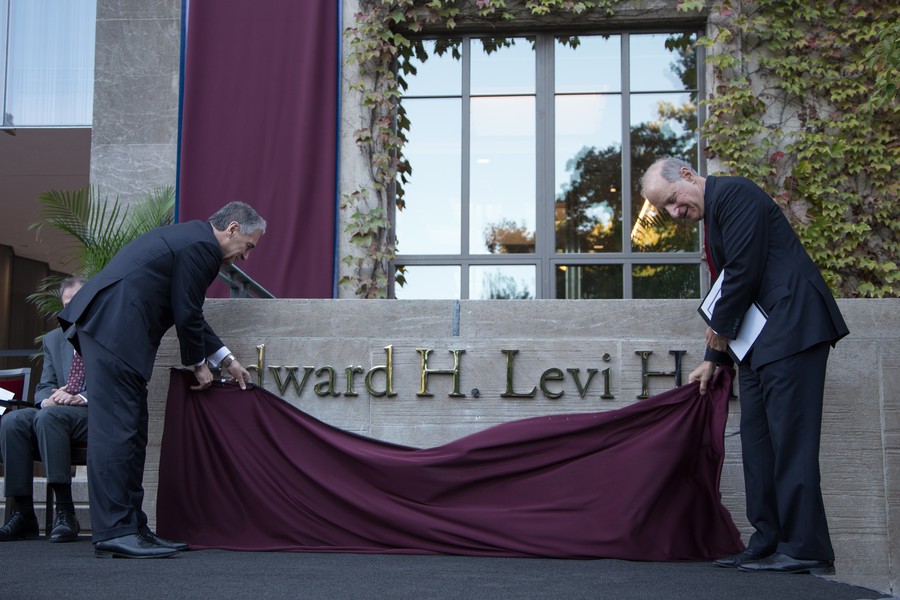 The Administration Building now bears the name of the University president famously locked out of it during the turbulent student protests of the 1960s.

Levi, who also graduated from the Laboratory Schools, has a long history at UChicago, starting from when his grandfather was appointed a faculty member at the Divinity School in 1892. Levi was the first faculty member of the University to become provost and oversaw the construction of the Regenstein Library during his term as University president from 1968 until 1975, when he left Chicago to become attorney general under President Ford.

In January of 1969, when Levi was president, 400 students staged a sit-in at the Administration Building in protest of the University’s decision to not reappoint Marlene Dixon, a popular sociology professor and known Marxist-Leninist.   A month later, protestors barricaded Levi and other administrators in the Quadrangle Club and also demonstrated at Levi’s home until a student broke a window. Nonetheless, Levi refused to resort to force and call city police.

Levi’s family believes that the Adminstration Building is “the perfect place” to recognize and honor him, according to his son John Levi.

“It was, after all, here in 1969 that he and a group of courageous and dedicated administrators, faculty, and trustees so skillfully defended this great university from the protests of that turbulent time in our country,” he said.

President Robert Zimmer and John Levi unveiled the new sign for the hall and formally announced the rededication to a crowd of distinguished guests and university administrators, including past University Presidents Hanna Gray and Hugo Sonnenschein.

John Levi spoke about his father’s close connection to UChicago and his humble personality, saying that if he were here today to see the rededication he would be amused to see so many people coming out for an event in his honor.

Current Dean of the Law School Michael Schill spoke before the dedication about Levi’s contributions to the University and especially to the Law School.

“I know Edward Levi because a day doesn’t go by that I’m not reminded by an alumnus, a faculty member, or friend that I am merely the current occupant of the Dean’s office at the law school; Edward Levi is the owner of that office,” Schill said.

Levi’s signature course, Elements of the Law, is still taught to first-year Law students to this day.

The rededication comes after summer renovations on the building that saw the completion of an open-air passageway designed to better connect the west end of campus to the Quad. Construction continues on the east side of campus in attempts to improve connections between important parts of the University.

“As we rededicate this space,” Zimmer said after the unveiling, “it is our hope, that everyone of us who works in this building, that all who come here in service of the University of Chicago and what it stands for, and that all who pass through are inspired by Edward Levi’s unfailing dedication to the University.”