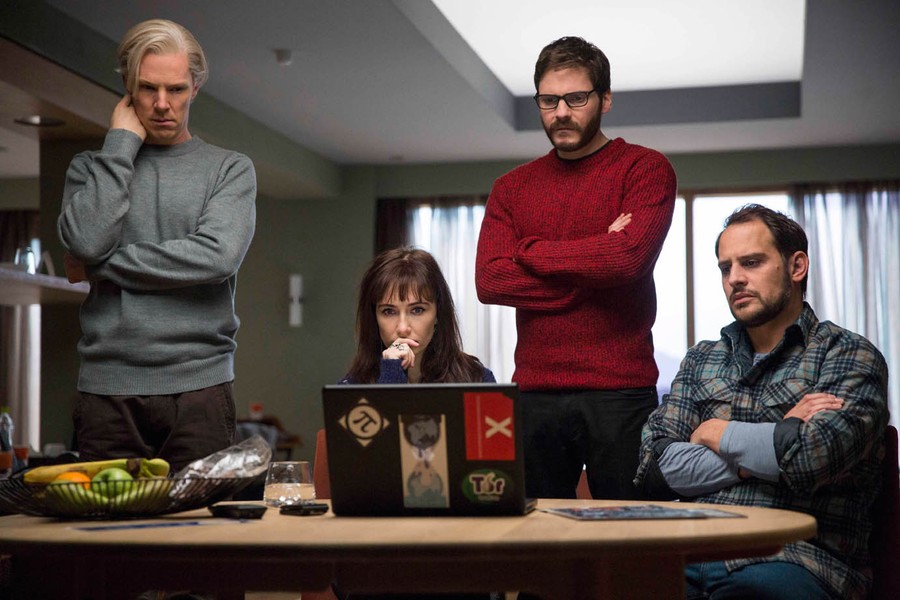 Considering it’s a movie about an organization dedicated to unbiased and open journalism, it is unfortunate that The Fifth Estate exemplifies the worst in sensational storytelling, manufacturing heavily-biased drama for the sake of cheap narrative thrill. Neither subtle nor surprising, this attempt at a journalistic and political thriller is instead clunky and clumsy, throwing in fancy camera shots and special effects in place of proper narrative development.

The story is angled from the point of view of Daniel Domscheit-Berg, an impressionable young German computer whiz who meets Julian Assange, mysterious white-haired champion of open news and founder of WikiLeaks. Domscheit-Berg quickly becomes Assange’s dedicated follower, going on assignments to meet with the sources of leaks and managing the website and servers under Assange’s direction. Together, the two expose corruption in large banks and, in their biggest scoop by far, leak videos of civilians being killed in the Middle East and thousands of Afghan war logs. The site gains more and more publicity and popularity, but Domscheit-Berg’s hero worship quickly dissolves as he comes to realize that Assange is dangerous, manipulative, and out of control.

As the movie progresses, Assange’s pathological and controlling personality reveals itself through his paranoia, muttered comments about not wanting people who think for themselves, lying about the size of the WikiLeaks organization, suspicion of any potential movement to usurp his authority, and constantly shifting stories about how his hair turned white. Meanwhile, Domscheit-Berg is portrayed as dedicated and clear-thinking—someone who can distinguish fact from fiction and moral from immoral.

One of the film’s largest draws is Benedict Cumberbatch acting as Assange, and he does not disappoint: sporting blue contact lenses and a white wig, Cumberbatch coolly pulls off Assange’s driven, idealistic, and awkward—yet charismatic and intense—personality. Daniel Brühl, playing the hero-worshipping sidekick, does a good job of making Domscheit-Berg a likable and relatable character, naïve and willfully blind to the flaws of his mentor and idol. However, good acting can’t make up for the rigidity of the script, and more time is spent on fancy editing than on rounding out characters.

Organizationally, the film follows one obvious theme—instead of cooperating with Assange, Domscheit-Berg must question the morality of WikiLeaks and his blind obedience to its leader. At the same time, there are too many unexplained segments and plot developments that go nowhere. The Fifth Estate is guilty of cramming: It throws in new characters, settings, romantic arcs, WikiLeaks developments, and news from the White House wholesale at the audience, with little to no context. For those who did not remain up-to-date with the WikiLeaks news a few years ago, the movie is a confusing mash-up of events and clips from CNN and Fox that sound ominous but give little clarity. Because of this, the movie drags. In a little over two hours, there are innumerable scenes of huddled conversations and small bits of piecemeal drama that arrive unannounced.

While U.S. state officials and the newspaper reporters from The Guardian come off as earnest and genuinely trying to work for what they believe is best, the perversions of Assange’s character are cast against Domscheit-Berg in a stark, black-and-white distinction. There is little ambiguity; it’s clear whom we’re supposed to like and whom we’re supposed to hate. Domscheit-Berg’s moral dilemma is similarly weak. It’s obvious what he’s supposed to do, ethically, to protect innocents from the ramifications of WikiLeaks’ open sources, and so—spoiler alert—he does it.

Though the end of the movie has a rueful shot of WikiLeaks supporters, it isn’t enough. Rather than leaving the audience to judge the culpability of the conflicting parties in the movie, The Fifth Estate heavily emphasizes the extremes of Assange’s character. Its pretentions to documentary seem to instead advance an ideological agenda.  In trying heavy-handedly to show the negative side of Assange’s work with WikiLeaks, the movie fails to convince us of anything except its own eerie resemblance to propaganda.

The Fifth Estate, directed by Bill Condon, is playing at AMC River East.