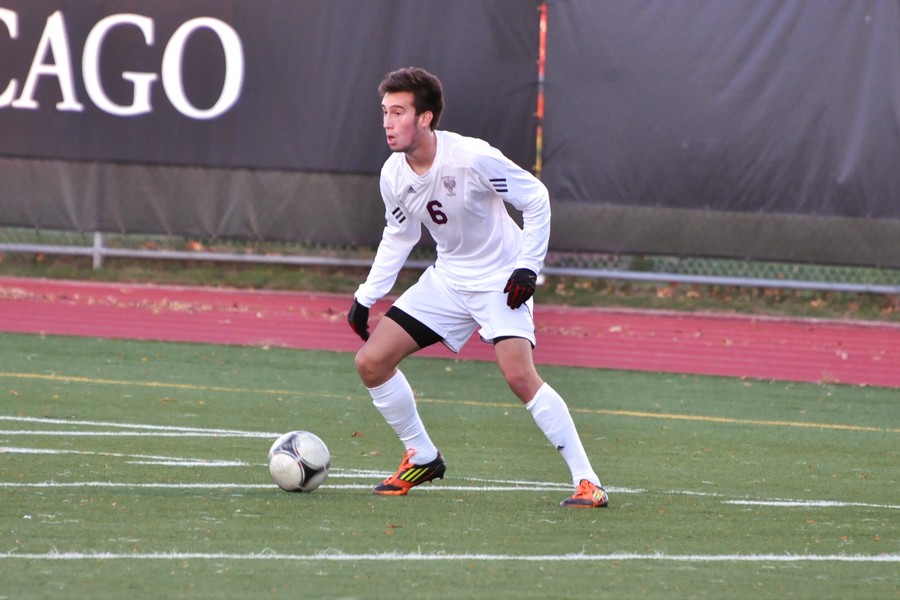 In their first UAA game of the year, the Maroons (6–1–2) came together to fend off last year’s conference co-champions. Third-year midfielder Nic Lopez was the star, heading in both goals in a 2–1 victory.

“Every UAA game is tough, but going on the road to play CMU, who’s got seven or eight starting seniors from the team that were the co-champs of the conference last year, is going to be a challenging game to play,” said head coach Mike Babst.

Chicago began the match with an offensive mindset.

“We came out with a lot of energy and high pressure as planned, and it paid off. We scored first—about 10 minutes into the first half. Nic Lopez scored off a really nice header on a corner kick from [third-year] Matt Vecchitto,” said third-year forward and team captain Kyle Kurfirst.

Carnegie equalized on a free kick four minutes later. The score remained level for the rest of the half, with the Maroons’ defense working hard to keep Carnegie out.

The second half was marked by high intensity and a number of fouls from both teams, and the game became more open as the half progressed.

In the 79th minute, third-year defender Nick Codispoti collected the ball inside Carnegie’s half before playing a deep cross to the back post where Lopez, unmarked, headed in for his second goal of the game.

The Maroons did well to limit Carnegie’s chances after the goal until a mistake from Codispoti gifted the Tartans one more chance in the final minute of the game.

Codispoti conceded possession from a free kick and Carnegie launched a counterattack, playing a long ball over the top to put Jerome Reano in one on one against second-year goalkeeper Brett Wiesen.

Wiesen was off his line quickly but collided with Reano as he attempted to clear the ball, leaving both players on the floor. Wiesen, deemed to have used excessive force by the referee, was issued a red card, while Reano had to be withdrawn after extensive medical treatment.

After a 10 minute break for the injury and some confusion as to which team would receive the ball when play restarted, it emerged that Reano had been called offside shortly before the collision, and the ensuing free kick was awarded to Chicago. The Maroons were able to see out, to their relief, the final 30 seconds of the game with little incident, holding on for the win in their first UAA game of the season.

It was a big victory, with the Maroons not only sending a message out to the rest of the UAA conference but also continuing this season’s trend of different Chicago players stepping up in big games.

The Maroons now look to focus on their second of three upcoming UAA conference matches. They will host the Emory Eagles (7–3–1) at home this Saturday, with the action scheduled to begin at 11 a.m.

“Every player feels this year will be special. We believe we can compete with any team in the country, including Emory,” Codispoti said.  “We feel like we got robbed last year down in Georgia, so every returning player is eager to get another chance at them.”