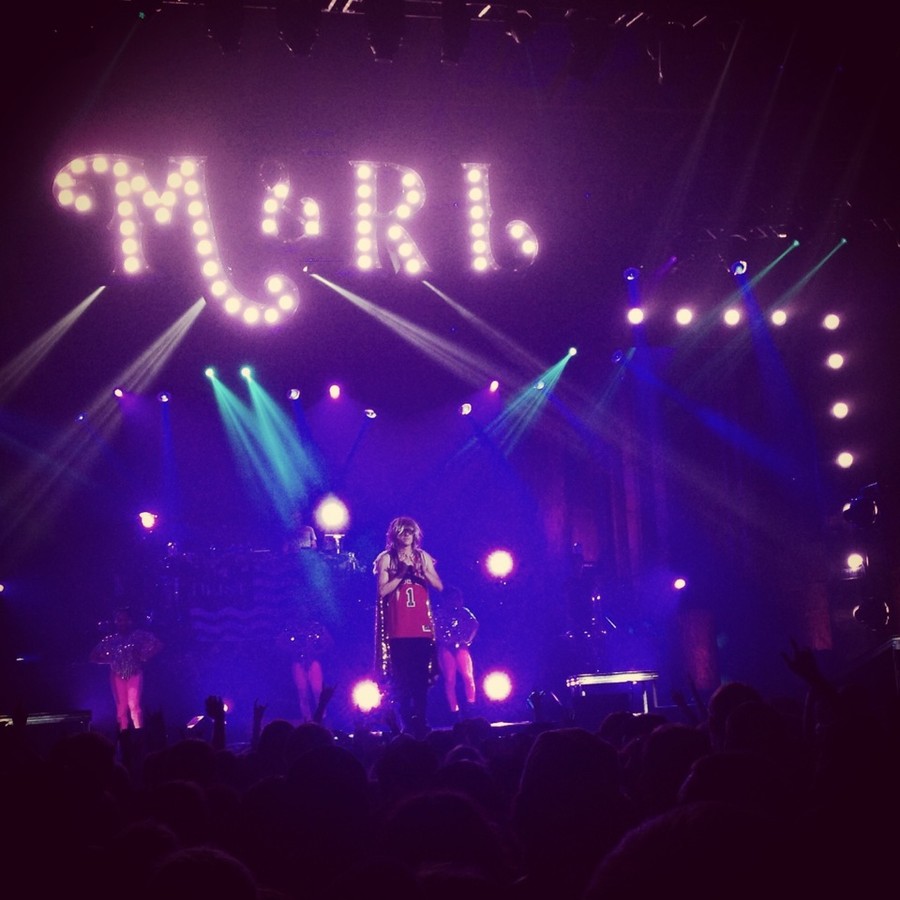 This past Monday Ben Haggerty, better known by his stage name Macklemore, performed at the UIC Pavilion. All the seats were packed with excited college students as well as older fans who knew all the words to all of Macklemore’s songs. The openers for Macklemore were Big K.R.I.T. and Talib Kweli, who were good at achieving their goal of warming up the audience for Macklemore’s appearance on stage.

The concert reiterated to audience members that Macklemore creates at least some of his music in order to convey political messages. Macklemore used anecdotes to introduce the first couple of songs; he introduced “Otherside,” which depicts an individual’s struggle with addiction and sobriety, by talking about his own personal struggle with drugs and alcohol. He advocated for sobriety by claiming he could only write music in a sober state. However, that wasn’t the only message Macklemore managed to convey throughout his concert. His songs are pervaded by various political statements. For instance, Macklemore performed “Same Love”—which calls for LGBTQ rights—with the female vocalist Mary Lambert, whose appearance came as a pleasant surprise to the audience. Another song with a clear political message was “Wing$,” the lyrics of which talk about the dangers of a materialistic society through a child’s passion for pricey sneakers. This is an ironic song for Macklemore, considering that “Thrift Shop,” which he performed third, is his most widely played song, with almost 450 million views on YouTube.

Most of the songs Macklemore performed were from The Heist, with a few notable exceptions, such as “Irish Celebration,” which entailed Macklemore, Ryan Lewis, and a few of the musicians on stage waving the Irish flag. At this point the stage colors changed into the national colors of Ireland—green, white, and orange. At another point during the concert, Macklemore claimed that although rappers in the past have been famous for being able to freestyle, that trend is now dying away. This seemingly spontaneous reflection prompted him to freestyle and record his own voice on loop.

Another memorable moment during the concert was Macklemore’s prolonged story in which he described his clothes being stolen as he swam in Lake Michigan naked. The story ended with an old lady taking Macklemore to a thrift store, which functioned as the perfect transition into a performance of the wildly popular tune. Wanz was featured in performance as another surprise for the audience.

The concert was not only rich for those who like to listen; there was a lot to see, too. The stage was decorated to resemble a living room with a sofa in the back for the first couple of songs. And the video screen behind Ryan Lewis occasionally showed lyrics and videos that accompanied Macklemore’s performance. The show was also, to an extent, interactive; the crowd on the dance floor got to play with giant orange balloons and was showered with confetti.

Throughout most of the concert Macklemore was dressed in a Bulls jersey, although he did have a few costume changes and additions, like when he wore a wig to perform “And We Danced.” The stage was made up of two levels, the top one being the DJ stand at which Ryan Lewis stood. The staircases were occupied by musicians with various instruments, including violins and trumpets. The lower level was where Macklemore spent most of the concert. To the delight of all the people in the front rows of general admissions, Macklemore did a standing semi-crowd-surf. The various aspects of the performance resulted in a concert that spurred the audience to request three encores—a good sign for any musician.