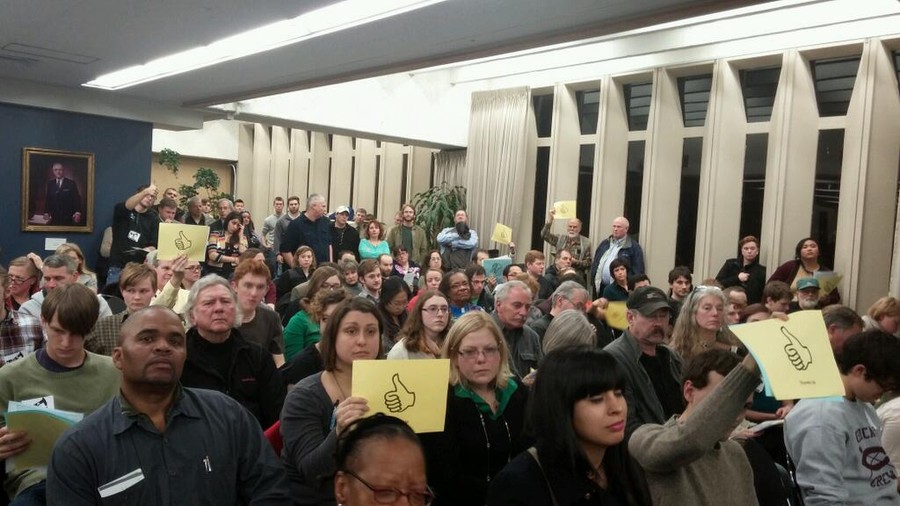 Courtesy of The People's Lobby

A group of UChicago students affiliated with the UChicago Climate Action Network (UCAN) and the Southside Solidarity Network (SSN) attended a public hearing last Tuesday as a part of a citywide campaign to block a set of proposed fracking regulations for the state of Illinois.

The state senate passed a bill in June allowing fracking companies to drill in Illinois for the first time. After the bill was passed, Governor Pat Quinn and some large environmental nonprofits, like the Sierra Club, outlined a bill to regulate fracking. The Illinois Department of Natural Resources (IDNR) was charged with drafting the actual bill and filling in the details, which still needs to be approved by the Joint Committee on Administrative Rules (JCAR), part of the Illinois State Senate.

Environmental groups are protesting the proposed bill, released to the public on November 15, due to a number of loopholes that they say are unacceptable.

“We have an incredible amount—an insane amount—of natural gas. If we could do it right, if we could do it in a way that reduces emissions…that would be amazing. But the problem is that we’re not doing that right now,” said second-year UCAN co-director Jonny Behrens.

The IIRON Student Network, a grassroots group working with UCAN, has a list of grievances that it wanted the IDNR to acknowledge at the public hearing. Among these is the provision that fracking wells are allowed to cause earthquakes up to a magnitude of 4.9 before being shut down.

Members of UCAN attended the public hearing to voice their concerns about the proposed regulations in an effort to block the bill. Public comments can also be submitted in writing, so UCAN, along with the Chicago Youth Climate Coalition, is participating in a letter-writing campaign to flood IDNR with protests against the regulations.

The hearing was two hours long. Speakers were chosen by lottery and testified before a panel of IDNR members for a maximum of four minutes. According to SSN member and second-year Ben Chametzky, about six UChicago students were chosen to testify.

During his own testimonial, Chametzky spoke about the dangers fracking poses to towns in Illinois that rest on fault lines, including his hometown of Carbondale, Illinois.

“Given that people there are already worried and ill-prepared for a massive earthquake, doing things that could exacerbate the chances of that are not a good idea,” Chametzky said in an interview with the Maroon.

First-year Michelle Mejia expounded on another IDNR controversy: the timing of the public hearing. Many of those who testified commented that the hearing, the only one in Chicago, was held right before Thanksgiving, a time when many are traveling.

In another effort to slow down and closely regulate fracking in Illinois, UCAN and IIRON will target JCAR, the body that will have the final vote on the proposed regulations, through one-on-one meetings and a massive public hearing on Martin Luther King, Jr. Day.

“As an organization…we’re trying to slow down the process for the regulations, so we’ll slow down the process for fracking companies to come in, and that will give us time to push for another bill in the state congress that will basically give the ability to local governments, local municipalities, to have votes, to have conversations to... outlaw [fracking] up front in their community,” Behrens said.

According to UCAN members, the audience at the hearing was overwhelmingly opposed to the proposed regulations.