Female philosophers find a room of their own 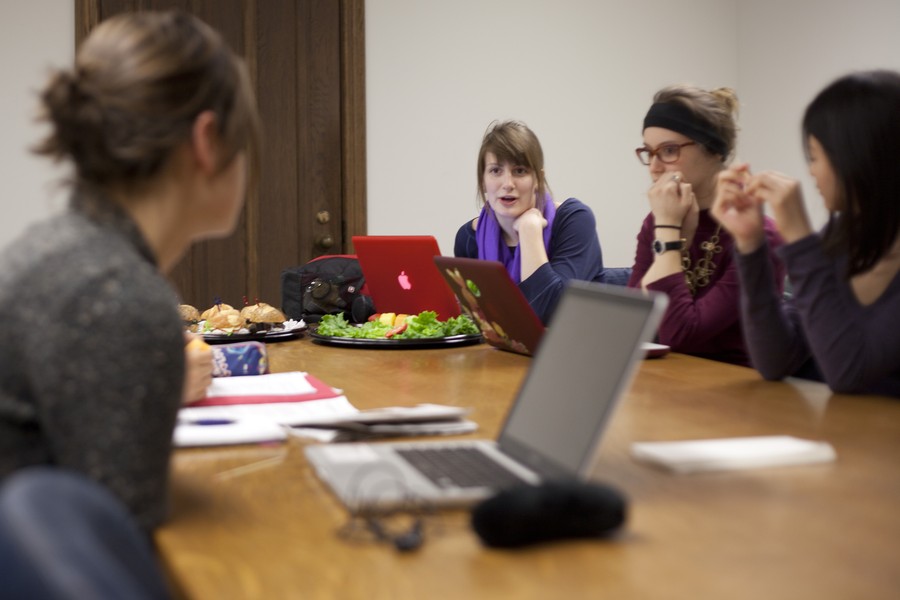 Two undergrads are determined to break the philosophical glass ceiling.

In response to an underrepresentation of women in the University’s philosophy department, third-year philosophy majors Julie Huh and Sabina Bremner have restarted the RSO Undergraduate Women in Philosophy (UWiP) to make the field more welcoming to female students.

Of UChicago’s 28 full-time philosophy faculty, only five, or 17.8 percent, are women. UChicago’s current chair of philosophy, Candace Vogler, was the only female faculty member in the philosophy department when she came to the University twenty years ago.

Approximately a quarter of the philosophy graduate students listed on the department website are female.

“There are lots of excellent women philosophers so it’s clearly not the case that women are inferior philosophers or philosophy students,” philosophy graduate student Dasha Polzik said. “But the numbers don’t lie: there’s something keeping undergraduate women out of the major.”

While the underlying causes of the gender discrepancy are not completely understood, research conducted by Rutgers University’s Department of Philosophy suggests there are cultural barriers in philosophy and other academic fields where women are underrepresented. These include implicit bias, by which minority groups are subconsciously discriminated against, and stereotype threat, the risk that minority individuals conform to negative stereotypes about their group.

Second-year philosophy major Noam Margalit said she notices the effects of underrepresentation of women in philosophy classes on campus.

“I’m usually the only woman or one of two if it’s a small seminar. In larger classes there are usually more women but it’s definitely not 50–50,” she said. “I’ve also never had a female philosophy professor.”

Last year, Women in Philosophy, a group of female philosophy graduate students, conducted a survey of students of both genders in philosophy classes. Asked whether they perceived more male participants in philosophy classes, female respondents more commonly responded that class participation was about equal between genders than that it was male-dominated.

“One of the positive things about the survey is that there wasn’t a huge outcry,” Francey Russell, a member of Women in Philosophy, said. “It’s nice to know that these groups don’t only form out of anger or desperation.”

Though UWiP began as an offshoot of the graduate student group, it is now an independent RSO.

Huh said that, at the group’s first meeting, many female students described a process of screening themselves before speaking in philosophy classes. “Many don’t speak right away and keep their thoughts withheld because they feel that they need to have something polished to say,” Huh said.

The new undergraduate group’s discussion format is intended to allow female students to voice their arguments more openly in a less formal and more supportive setting.

“Everyone in this field has to carry themselves through argument and be ready to defend themselves against harsh criticism,” Huh said. “And you have to have strength and know other philosophers to go out and ask them, ‘How can I improve my argument?’ Only when you talk to other people about it are you going to improve your argument.”

While the group is targeted toward female students, the topics discussed will not be limited to female authors or feminist philosophy.

Huh was optimistic about the club but stressed that the group is only part of the solution.

“If there are going to be more female students in philosophy, they themselves have to make that effort,” she said.

Philosophy graduate student Francey Russell noted several tangible effects of the re-emergence of UWiP. For example, after a meeting with female undergraduates, three of them decided to switch to the intensive track of the philosophy major.

“Just getting together and talking can be empowering and encourage them to stick out,” she said.

In addition, the number of women writing B.A. papers and completing the intensive-track major, which serve as rough indicators of those going on to graduate school, have increased to be consistent with the number in the major overall.

“We’re really happy about this.... It’s a move in the right direction,” undergraduate philosophy major coordinator Jennifer Johnson wrote in an e-mail.

Polzik noted that at an event fall quarter for philosophy majors applying to graduate school called “So you want to be a philosopher?” featured a photo of Philippa Foot, a female philosopher, rather than the standard bust of an ancient male philosopher.

“That little change of what a philosopher looks like really does something. That kind of thing can be really powerful. It’s baby steps,” she said.