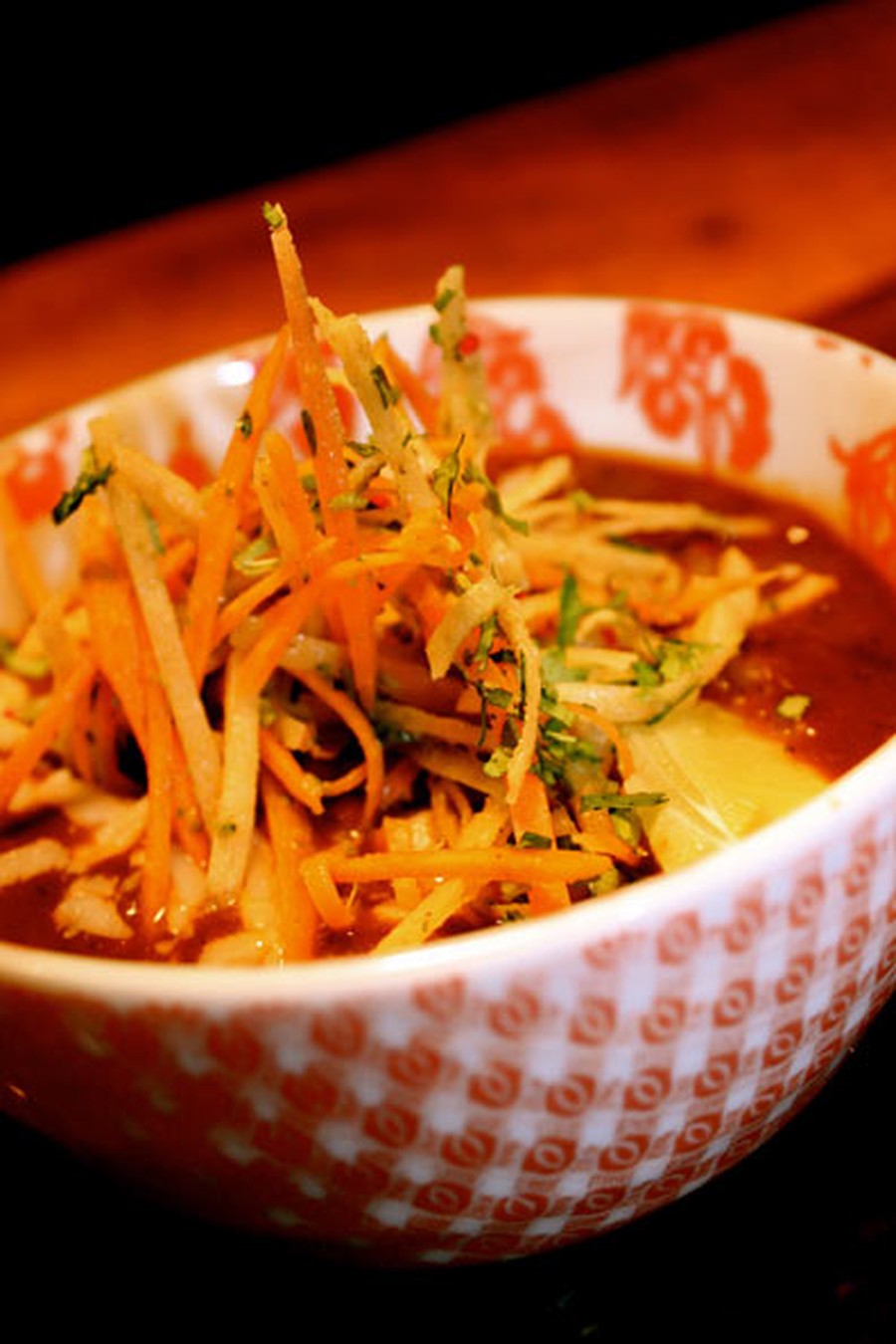 In a heavily gentrified neighborhood… where the seemingly simple act of getting a quality taco requires standing in line for hours on end…one taqueria will rise…and the Kahan Restaurant Empire will fall.

I speak of course of the mysterious world of Wicker Park, where Hot Chocolate and Harold’s Chicken un-ironically coexist, united in fear, under the shadow of Chef-Emperor Paul Kahan’s signature super-weapon—the Big Star. Capable of mass destruction with its powerful pork belly–emitting laser, Big Star looms large over the area’s helpless eateries. Fortunately, in these darkest of times, a worthy challenger has emerged in the form of the Antique Taco. Fighting on the side of fresh, market-to-table fare, much to learn they still have. Nonetheless, the food is strong with this taqueria.

The concept of a combination antique shop and taco stand may strike you as a novice attempt at a high-concept art installation: A critical exposé of the food-as-fashion mentality. Or maybe just a rejected skit from Portlandia. But thankfully, the only “antiques” the store seems to sell are a bunch of trucker hats and a rusty lunchbox. Which is just fine, since neither of those sounds particularly tasty. And unless you are desperately in need of a beat-up leather chair, your money is probably better spent on this market-driven Mexican menu.

Starting with the classic standby of guac and chips, your best bet is probably to skip the dip and indulge in the infinite basket of tortilla chips. They are corn-y in the best possible sense: much heavier on the masa flavor than the oil that can so easily dominate your palate. But if your chip feels lonely without some dip, the soup of the day may be the superior choice. Though the dish changes regularly, the butternut squash soup with kefir lime was starchy gloop and tasted eerily of a smoky bean puree. And since we’re on the subject of crispy creations, I have to compliment Antique Taco for its lone entrée-ish item on the menu: Duck enchiladas that would not be out of place at Frontera or Topolobampo for at least two or three times the price. Not gamey or unpleasantly “wild,” as duck can often be, this poultry was contentedly at home, snugly rolled up in a crusty tortilla blanket. Someone was even kind enough to drape a luscious cheese comforter over the top, and lay it ever so gently in a rich peanut molé and blackberry crema. 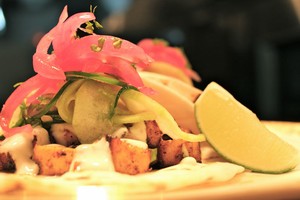 As good as the chips and enchiladas may be, you do not simply conquer a taco realm without a taco army at your side. And tacos you shall have: a protein platoon of steak, pork, chicken, and fish. Even the mushroom could pass for a form of fauna. Shredded pork carnitas and chicken tinga tragically err on the side of desiccating dryness. Though I suppose you could put in the extra effort of making sure that the creamy toppings on each (avocado and queso fresco for the pork, “ranch” crema in the chicken) are well-integrated throughout the interior before taking a bite. Neither of the tacos is an outright failure; they just suffer from a bit of identity crisis. The chicken pines after this vague “buffalo-style” concept, while the sad little bacon strip in the carnitas seems lost and confused, miles from home.

Inevitably, there is the requisite ode to the West Coast that is the fish taco. It contained one of the heftiest pieces of fried fish I have seen in a taco, yet the fish was strangely absent amidst an overgrown sea of cabbage. Less fish taco, and more like fish T’eo. But, unlike Manti, when I finally did manage to get a nice, big bite of reality—the flaky white fish encased in its beer-battered armor—I could not have been happier. The joy, however, was fleeting. At this point the taco dream was losing structural integrity and collapsing; the soggy truth of the matter set in.

There was redemption yet to be found amongst the meats and fishes of the taco world: the steak. The first bite starts you off with a quality piece of steakhouse craftsmanship. The second suddenly and gloriously devolves into juicy cheeseburger debauchery, thanks to the addition of Cheez Whiz. Finally, you are dropped off on the streets of Philly, eating a cheesesteak complete with onions and peppers. But, far and away, the best taco was a humble assembly of market mushrooms. Simple and unencumbered by any tricked out toppings (save some pumpkin seeds and onion crema), the mushroom medley was cooked as well as in any Chicago restaurant. Through the magic of mushrooms, I grow ever closer to understanding the allure of a vegetarian lifestyle.

Deep down, I realize nothing I ever say, write, or do will stop you or thousands upon thousands of Chicagoans from heading to Big Star for your not-so-quick taco fix. And resistance is futile. It sits content and unopposed as one of the city’s “must-eat” destinations; a convenient calling card signifying your membership among the foodie elite. But the time for action is upon us: Gotham Chicago, take control...take control of your taco! Deshi basara! Deshi basara! The inevitable day will come when Big Star attains critical mass, going full supernova and taking down a good chunk of Wicker Park in the process. Many lives will be lost, mustaches scorched, fixed gear bikes in need of new paint jobs. Yet even in these tumultuous times Antique Taco will remain, meeting all your taco needs.

Antique Taco, located on 1360 N. Milwaukee Ave. The price for an average taco is $8.