Lewis: "The key is to analyze what makes schools better." 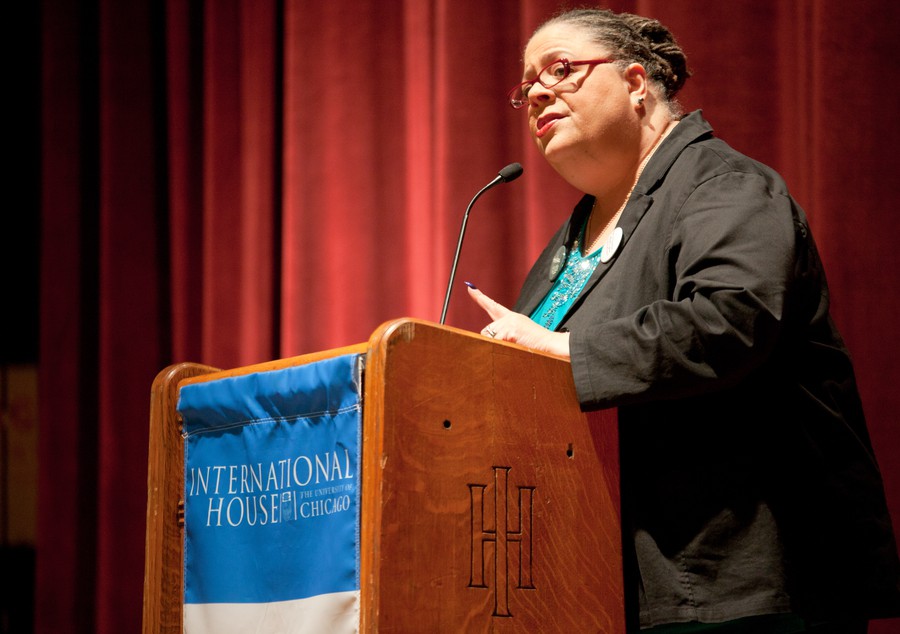 Exactly five months after the Chicago Teachers Union voted to end its weeklong strike, union president Karen Lewis spoke about her personal experiences, vision for education, and what she considers a fulfilling education at International House last night.

“I truly believe in a liberal arts education, and I know how important it is in making your life special,” Lewis said. “To me, that’s the whole point of education. Education to me is not job training.”

The event gave Lewis, “the face of education in Chicago,” a chance to show a different side than that of combative leader, which she earned fighting Rahm Emanuel during the strike, according to Emmaline Campbell, vice president of Gender Activism, Learning, and Service (GALS), which organized the event.

Much of her talk was dedicated to her positive experiences with creative lesson plans and promoting inquiry, and her opposition to the “narrow way” of focusing on assessment and testing.

Lewis also reiterated her stances against what she perceives to be a prejudice against the teaching profession and efforts to undermine “publicly funded public education.”

“I want to make sure that people who have sent their children to Chicago public schools have not just a choice, which is really a chance—I believe that children should have a guarantee.”

Karen Lewis spoke to the Maroon after the event about UChicago Promise, charter schools, and the University’s role in the Chicago public education debate.

Chicago Maroon: This past fall, Rahm Emanuel and the University announced UChicago Promise, which allows CPS students to attend the University of Chicago loan-free. What effect do you see that having?

Karen Lewis: It will have a positive effect on the students that get there, but I think these things are very nuanced, and for me, I’m trying to look at a global vision of how CPS works and functions. Providing individual scholarships to individual students—while it’s wonderful... My concern is that it will impact such few lives. I would like to see a focus on bringing the type of education we see at the Lab School, for example, and scaling that up to the way Chicago educates its children. But I think [UChicago Promise] is fantastic if people can do it.

CM: UChicago is a research institution—how can research be used for your vision of making all schools better?

KL: First, we have to decide that that’s what we want to do, we have to honest about what the resources are, and we have to have a plan or a curriculum. We have standards and we have assessments, and we don’t have enough in between. The key is to analyze what makes schools better, what makes the schools that work, work. We see children who have health care, social supports, small class sizes—but the key is, because we have limited resources, we’re always picking and choosing. We have a massive problem, and the way we’ve been trying to fix it is by testing people to death and then punishing them.

CM: Here at the University of Chicago we have the Urban Education Institute. What are your thoughts on the work of UEI, speifically their 5Essentials standards which have been adopted by Chicago Public Schools and the Illinois State Board of Education?

KL: I think the 5Essentials are great because they actually have a demonstration of what schools need to work and when those components come together, they work beautifully. So for a research purpose I think it’s excellent.

CM: The University also operates its own charter schools. What are your views on that?

KL: I have a problem with that, clearly. I have not seen the results that demonstrate that they’re doing magnificent work. I think they’re doing fine, but I don’t think it’s anything special. It’s hard for me to comment on [the University charter schools] specifically because I haven’t seen all the data, but I have a problem with the whole concept of charter schools because I think they aren’t all that necessary if we make a commitment to publicly funded public education.