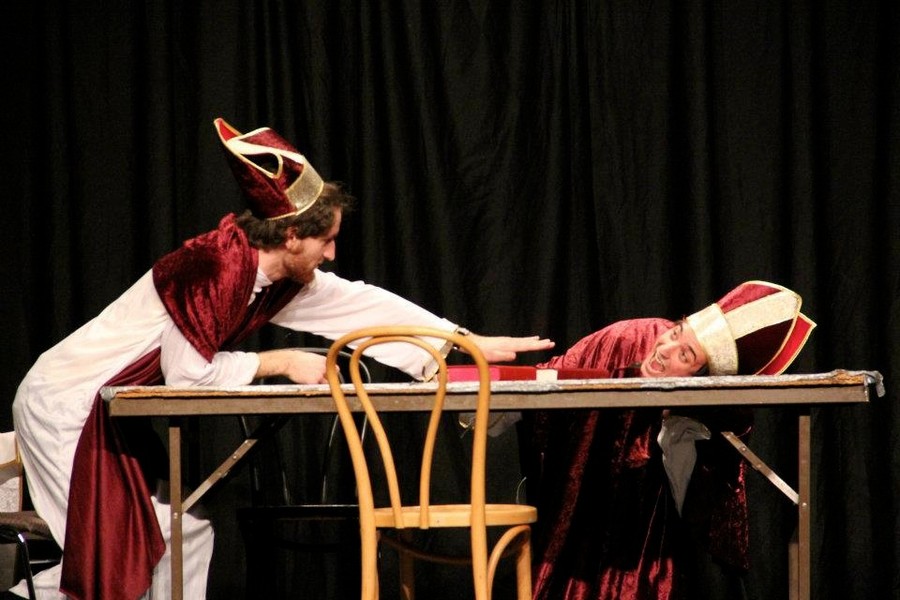 In “Great Moments in Financial History,” an Off-Off Campus comedy show directed by and starring fourth-years Harmon Siegel and Evan Weiss, a major company accused of fraud is brought before the United States Congress. As the smooth-talking CEO battles an ornery Minnesota senator, another senator practices yoga in his chair while a trustworthy company representative exhibits symptoms of severe mental impairment, all while C-SPAN cameras are rolling.

In fact, very little of this will happen in the actual Friday night performance. As the duo explained at a rehearsal this past Sunday, the show features “beated improvisation,” a performance technique that follows a narrative arc with several designated “beats,” or plot points, that the actors will hit. How they get from point to point depends solely on improv. Siegel and Weiss haven’t exactly figured out the beats yet, so the cohesive and seemingly planned 30-minute performance I saw was essentially created out of thin air.

It’s not as if the show hasn’t been given any thought. “We’ve been talking about this for the past year,” Weiss explained. They have spent months preparing by reading financial books and articles and watching documentaries. C-SPAN has been one of the biggest influences, and the duo has a list of actual quotes from the network that it regularly incorporates into its rehearsals.

The beauty of using finance for comedy, according to Siegel, is that “the comedy of the topic is itself—you don’t need to make jokes. Watching the CEO of Goldman Sachs talk for three hours on C-SPAN is just hilarious by itself.” Indeed, the self-perpetuating humor of economic and legal parlance through euphemisms, pedantry, and unnecessarily complicated jargon drove the performance, although the two claimed that they hadn’t added any of the “comedic stuff” yet.

While not economics majors themselves, Siegel and Weiss are hoping that the show will attract an audience from the economics department. They have received advice for their show from Allen Sanderson, a senior lecturer in the department, and may even be featuring Director of UChicago’s Institute of Politics David Axelrod and Austan Goolsbee, an economics professor at the Booth School, as special guests. With such a high level of interest from well-respected figures, Siegel and Weiss were surprised by the minimal response they received after reaching out to other RSOs. “It’s amazing when David Axelrod is sending you emails and Blue Chips is just like ‘fuck off,’” said Siegel. “They wouldn’t even respond to our emails, I had to track down a guy in person. He said to me, ‘This is a serious RSO. We want nothing to do with this.’” Eckhart Consulting, Women in Business, and The Platypus Review also turned down offers for collaboration.

Regardless of whether the special guests show up or not, “Great Moments in Financial History” has the makings of one of the most dynamic performances to be shown on the University Church stage. The preview may not speak for the content of Friday’s show, but it did demonstrate the talent of the comedic duo. As two actors playing at least eight characters, they engage in an effortless process of switching and swapping roles, so seamless it appears to have required prior practice, though they claim it’s entirely improvised. The two work so well together it’s almost disconcerting, a relationship they both attribute to “similar life experiences.” They cite comedic influences such as the Marx Brothers and TJ & Dave as models for how multiple actors interact with each other, as well as Woody Allen for his “good first, funny second” approach to comedy.

Siegel and Weiss both appeared in an Off-Off sketch last year called “Great Moments in Church History,” which was not entirely well-received, but from which they learned a lot. “Great Moments in Financial History” will feature a better balance between physical and talking comedy, and will reach out to more genres of humor apart from esoteric knowledge. They’re also hoping to have PowerPoint presentation in the background because “we think PowerPoints are pretty funny,” said Weiss.

As fourth-years with graduation looming, Siegel and Weiss will be setting a finale to their careers at Off-Off with “Great Moments in Financial History.” It won’t be their last time on stage, though—the 24th generation will also reunite in the spring for at least one final performance. However, Siegel and Weiss trained the 26th generation of Off-Off, and believe that the future of the group looks better than ever. “They came in as a really talented group, but we taught them how not to just stick to same old thing and how to ‘care, ’” said Weiss.

Meanwhile, the 27th generation will be performing their first sketch comedy routine as an after-glow for “Great Moments in Financial History.” And so the cycle of Off-Off Campus continues.

"Great Moments in Financial History" will take place at University Church; tickets are $4.