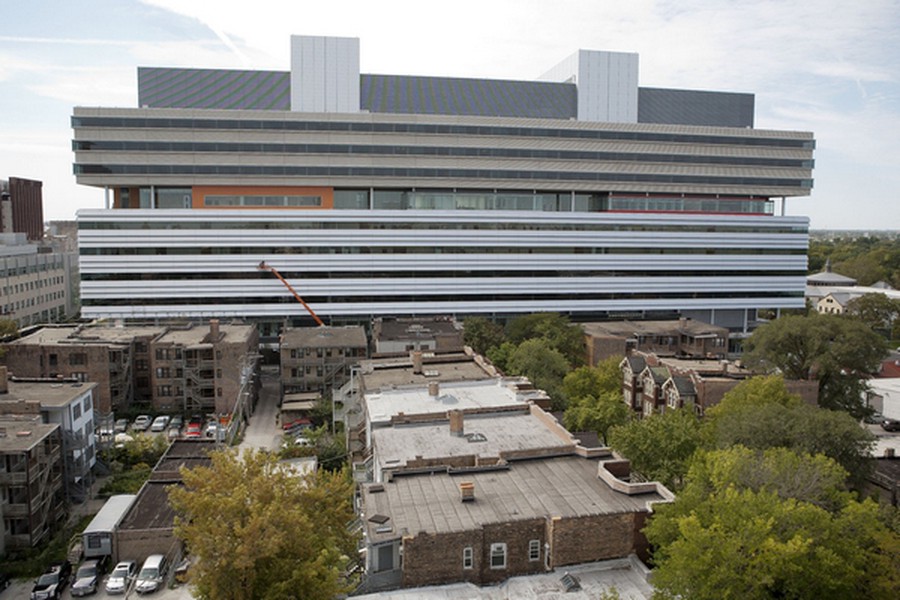 Five years in the making, the University of Chicago Medical Center’s (UCMC) new 10-story hospital, the Center for Care and Discovery, will officially open tomorrow. With the help of UCMC staff, volunteers from the College’s Pre-Medical Student Association, and Pritzker medical students, around 200 patients—including ICU, oncology, and recovering surgery patients—will be transferred from Mitchell Hospital to the new center, according to a UCMC press release.

The center, covering a total of 1.2 million square feet, 240 single-occupancy inpatient rooms, and 28 operating rooms, will house the cancer, gastrointestinal disease, neuroscience, high-technology radiology, and advanced surgery units. According to John Easton, a member of the UCMC media team, these particular specialties require advanced technology that the new hospital will now be able to provide.

From extra-wide hallways for increasingly large equipment to multifunctional, adjustable rooms, the hospital was created with the future in mind. Each floor is organized by a “grid system,” consisting of 85 multifunctional “bays” 31.5 feet across and 18 feet high, which can be easily transformed into two patient rooms, one operating room, or one procedural room. Staff lounges, too, were made with removable walls so that they can convert into conference rooms if need be.

“Equipment keeps getting bigger; even patients are getting bigger. We’re just looking into the future,” Easton said. “It’s better to do it now than to have to expand later.”

Patients will check into the hospital on the central “Sky Lobby” located on the seventh floor, which Easton described as the part of the hospital designed to be “less focused on medicine and more focused on ambiance and comfort and [to be] family-oriented.” It’s 100,000 square feet, surrounded by floor-to-ceiling windows, and contains a chapel, extensive family waiting areas, private waiting rooms, a 24-hour dining area, and an acoustically designed boardroom.

The inpatient rooms, including 52 Intensive Care Unit beds, are located on the eighth, ninth, and 10th floors. The sixth floor, with its 28 operating rooms—nine more than the current hospital—is dedicated to surgery as well as pre- and post-op care. Non-operational procedures will take place on the fifth floor. Surgical pathology, the blood bank, and the pharmacy are located on the second, while lobbies, retail space (including a Starbucks and a Wolfgang Puck Express restaurant), and an inpatient kitchen make up the first. The third and fourth floors will be unoccupied and reserved for future expansion.

The center’s architect, Rafael Viñoly, also designed the Booth School’s Charles M. Harper Center. According to Easton, the positive reception of the Harper Center made Viñoly a leading contender for the architect position.

Over 40 percent of the businesses involved in the construction of the Center for Care and Discovery were firms compliant with UCMC’s 2001 initiative to increase its involvement with minority- and women-owned firms, according to Easton. The construction of both parts of the Comer Children’s Hospital in 2004 and the UCMC Drexel Parking Garage also satisfied this initiative.

A statement on the opening by UCMC president Sharon O’Keefe to medical center staff was forwarded to the campus community by Kenneth Polonsky, Executive Vice President for Medical Affairs and Dean of the Division of Biological Sciences, notifying people of possible effects of the move.

“From 6 a.m. to 6 p.m. on Saturday, February 23, all UChicago Medicine property will be limited to those with prior appointments or explicit permission to be on the premises. Also, two roadways will be closed: Maryland Avenue from East 57th Street to East 58th Street, and East 57th Street between South Cottage Grove Avenue and South Drexel Avenue. Finally, there will be many one-day parking restrictions in the area,” the statement said.

Highlighting possible inconveniences, O’Keefe also asked that those “not directly involved in the move to help ensure the safety of our patients by avoiding the medical campus on Saturday.”

Lorna Wong, Assistant Director of Media and Social Media at the UCMC, said that the security and road closures did not have anything to do with the January 27 trauma center protests, which took place outside the Center for Care and Discovery.

“All hospitals that open up a new facility do the same thing,” explained Wong, referencing the two 2012 closures of Lake Shore Drive when Lurie Children’s Hospital and the Rush University Medical Center pavilion each opened.

Wong predicted a smooth transition during tomorrow’s move of patients, “The move day orchestrators have done a fabulous job plotting the day to the minute,” she said. “If all goes well, I think nothing should go wrong…. It really does seem like they planned for every contingency.”