As in real life, this year's Oscars saw women mistaking "plain" for "classic." 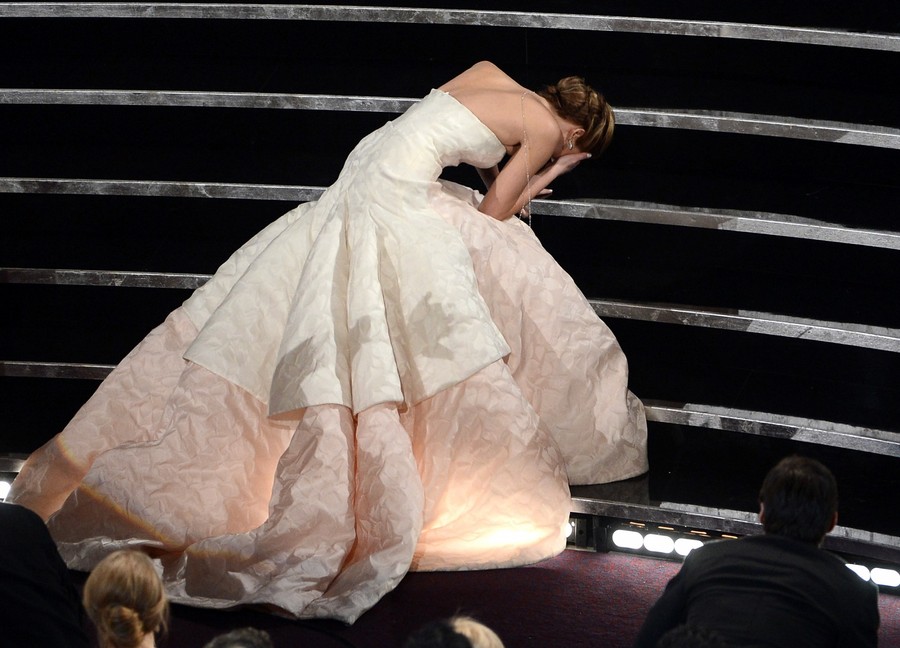 The showcase of fashions worn to the Academy Awards is inevitably followed by the buzzing of television commentators and fashion journalists. The phrases “he pulled it off,” “she nailed it,” and “he took a risk” are usually heard ad nauseum. At this year’s event, however, there weren’t many risks to be taken, with few overtly extravagant or unusual pieces. Female guests instead favored classic gowns characterized by details in silhouette and fit, and were generally intent on highlighting the shape of their (generally slim) figures.

One of the standouts from the 2012 Academy Awards was Gwyneth Paltrow in a sleek, columnar, white Tom Ford gown, and this year it appeared that many guests took a cue from her elegant and simple silhouette. Charlize Theron wore a slim white V-neck gown by Dior, the razor-sharpness of which was only softened by a peplum at the waist. It was a strong, minimalist look further accentuated by her cropped haircut. Helen Hunt was the image of simplicity in a straight, strapless navy gown; the only shock-factor here was the label, which apparently is H&M. Ironically, in a sea of elaborate, sequined dresses screaming for attention, it’s often the subdued gowns that stand out.

Several guests opted for halter necklines that further emphasize this column structure, which was met with varying success. Amanda Seyfried wore a silvery Alexander McQueen with collar neck and an opening in the front, which ultimately worked the way a halter neckline is supposed to—that is, it played up her beautiful shoulders. However, other elements distracted from this desired effect in Salma Hayek’s black velvet Alexander McQueen, which had an embroidered gold pseudo-turtleneck that swallowed up her neckline. In the case of Anne Hathaway in petal-pink Prada, oddly sharp seams at the bust of her dress and a princess-length necklace that almost appeared to be attached to the top all lessened the potential appeal of her choice.

Strapless necklines have unfortunately become synonymous with brides, who seek to flaunt as much skin as possible on top while dealing with the length and volume of their dresses. In many instances, female guests looked like they had raided a bridal boutique, with pale gowns featuring bustier tops. This look was seen on Amy Adams in the form of a frothy, ice-blue Oscar de la Renta, and Kristen Stewart in an ill-fitting white lace Reem Acra, which was perhaps yet another attempt of hers to convince the world she does not like being a Hollywood actress.

Jennifer Lawrence took a slightly more unique approach to the strapless gown, which was a Dior number in the lightest shade of pink and a gently dappled print. It was fitted to the thigh and then flared out into a voluminous trumpet shape composed of simple folds, and Lawrence looked lovely even as she fell while receiving her award for Best Actress.

The rejection of unusual shapes, prints, and elaborate beading in favor of simplicity was certainly refreshing, but also strange in the context of contemporary red carpet trends. With increasingly high standards from the public eye, celebrities use their formal appearances to garner more appeal; it’s rarely enough just to look good—one must also look unique. For younger actresses, strategic red carpet dressing has the potential to further their careers, and the likes of Rooney Mara, Emma Stone, and Jennifer Lawrence all shot onto the scene in the past few years after wearing surprisingly assertive red carpet looks.

The black-tie choices for this year’s Oscars may seem unconnected to the average woman, but they are in fact representative of evening trends for non-celebrities as well. For the past few years young women have been opting for a formulaic look, which generally consists of a short, tight dress, with sky-high heels. And although the ubiquitous Hervé Léger bandage dresses (and their knock-offs) don’t convey the same elegance of a long, slim gown, they similarly make emphasizing the figure the priority and any kind of uniqueness secondary. But evening clothes are most glamorous when they convey a sense of whimsy, so when creativity is consistently absent, one does wonder whether these fashion choices are “classic” or just plain.