Pinter’s The Birthday Party takes the cake (tastes like sadness) 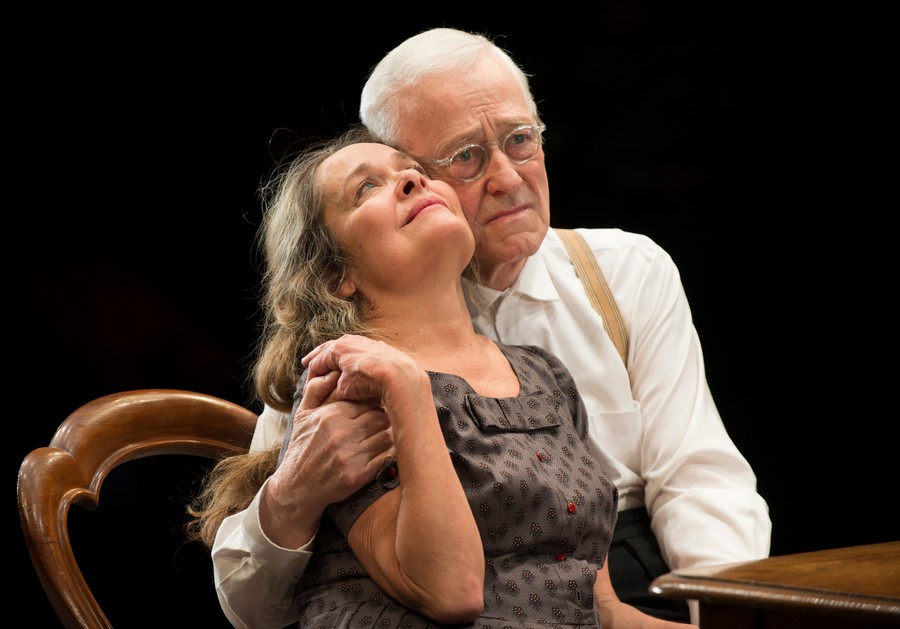 Courtesy of the Steppenwolf Theatre Company

If you want to make concrete sense of The Birthday Party, the Steppenwolf Theater’s latest rendition of Harold Pinter’s dramaturgical classic, you might first look to its structure. Three acts neatly encapsulate the morning of the party, the party itself, and the morning after. And then you might as well stop there.

For whatever its title might seem to suggest, The Birthday Party is anything but a simple celebration. It is instead a fascinatingly dark enigma, one that Steppenwolf Theatre has somehow managed to make even more inscrutable. Instead of a stage, director Austin Pendleton and scenic designer Walt Spangler have opted for a single raised platform, surrounded by the audience. The entire set consists only of a breakfast table and a coat hanger. It is, as the elderly Petey (John Mahoney) says at one point to his wife Meg (Moira Harris), “a straight show.” “No singing or dancing…just talk.”

Indeed, this is a party that takes some getting used to; we can’t even assume its “talk” to be truth. But its casual moments are its most telling. The play begins with Meg serving Petey his breakfast in their English seaside residence that doubles as a boarding house. As they talk, things seem to be reasonably under control. Meg asks her husband amiable, eager questions, and Petey cheerfully reports that his cornflakes, the summer weather, and the fried bread are all “very nice.” Yet beneath the table, Petey’s feet are restless. They jerk back and forth as he speaks, never settling on one spot. And behind Meg’s merry demeanor, her responses betray a woman who could be called absent-minded at best. When Petey reads to her about a newborn baby girl in the paper, she has to confirm it isn’t a boy—a mere three lines after asking, “What’s her name?”

The staggering, disheveled arrival of Stanley (Ian Barford), the only boarder, markedly heightens our sense of visual unease. His pajamas are stained, his hair unkempt, and his face contorted with sleepless agitation. Stanley is in his 30s, but he behaves more like a petulant young boy. He lets Meg parent him, but he doesn’t hesitate to throw a tantrum or two. Stanley knows what he wants, and he doesn’t want to celebrate his birthday (is it even his birthday?). “You mustn’t be mad today… It’s your birthday,” Meg implores, literally kneeling down and begging him to change his mood. We can see that she is genuinely trying to be happy, and she is desperate for Stanley to be happy too.

But as it is, he isn’t happy. And when two new boarders show up, things only get worse. We don’t know why these men—Goldberg (Francis Guinan) and McCann (Marc Grapey)—are here, but we quickly get the sense they’re no good. Grapey speaks with a chronic, menacing gruffness, and Guinan exudes wile. They frighten Stanley away, but neither immediately exposes the anxiety that’s been building up. So long as there is room for jokes, as when Goldberg refers to his partner—brooding glumly off to the side—as “the life and soul of any party,” there is room for the hope that things won’t turn out so bad.

And yet we aren’t allowed to retain this hope for long. The tensions start to bubble forth in the party scene, and from there the whole affair takes an eerie twist. McCann finally adopts a different tone, but it comes in the form of a sharp, angry yell directed at Stanley; Meg briefly tries a dance, but it only leads to a louder silence.

As the party’s lights go out, the unnerving minimalism takes a turn to the absurd. Here the play loses its rhythm in its own impenetrability: words continue to fly through the dark, but they mean little to us as we stare down at the dark platform. Here the production provides even less to go on than what could be gleaned from Pinter’s script, and our enthrallment briefly gives way to frustration.

But the acting in Steppenwolf’s production is handled too well to bog the show down for long. The following morning, Sophie Sinise, playing Lulu, provides just enough exasperation to hint at something sinister the night before. And when Guinan ominously tells Stanley that “there’s plenty of room in the car,” his rhetorical power almost seems to extend the invitation to us.

Barford, meanwhile, converts Stanley into a convincing adult. Yet adulthood doesn’t fit him; the irascible, pouting child is now but a sad, limp, and lifeless man in a suit. Even Petey shows concern. This time, when he and Meg sit down together at the table, it’s not just his legs that can’t relax. His face reveals a quiet sense of distress, and we notice it poignantly, even as it slips past the still ebulliently ignorant Meg. It’s a reminder of, when so many feelings get forced beneath the surface, how much things can change in a day—or how little.

The Birthday Party runs at Steppenwolf Theatre through April 28.