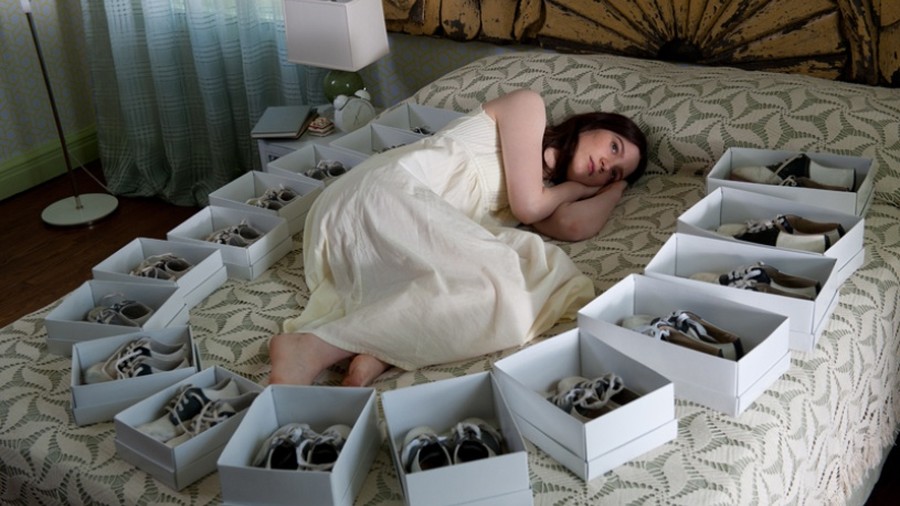 When it first made the festival circuit, Stoker, the Hollywood debut of famed Korean director Park Chan-wook, was, like any good movie, radically polarizing. The detractors were particularly vocal; back in January, a friend linked me to a review from Sundance that called the film a “brightly-colored Gothic disaster.” While most could agree that it was stylistically unparalleled, many were up in arms over its ambiguous plot (or lack thereof). Other complaints lodged included holey script, shaky characterization, a general unevenness, and execution that was sometimes near-comical.

And retrospectively, I’m almost tempted to agree. But then I think of the film’s closing scene—Mia Wasikowska standing atop a highway knoll, legs parted in a new pair of crocodile-skinned Louboutins, peering through the crosshairs of a rifle—and it becomes apparent that Stoker is getting at something that operates against convention. Whether or not that’s earned, however, depends on if you’re willing to buy into it.

To speak at length about what actually happens in Chan-wook’s film is to rob Stoker of the tension that defines it. Yet, for context: India Stoker (Wasikowska) and her father (Dermot Mulroney) are incredibly close. Lining his office walls are not only her pictures but also the stuffed corpses of all the birds he has spent years training her to hunt. When he dies in a car crash on her 18th birthday, India is left with her unstable mother, Evie (Nicole Kidman) and her uncle Charlie (Matthew Goode), who mysteriously turns up for the first time on the day of the funeral. Chan-wook’s camera often loses itself in Charlie’s magnetic cerulean eyes, which linger on India just long enough to let us know he’s planning something. In a confrontation in the middle of the film, Charlie says of India, “She’s of age.” Evie demands, on behalf of all of us, “Of age for what?”

As mentioned previously, the script, penned by Wentworth Miller (who starred in the show Prison Break), has drawn ire for reveling in its buildup and then failing to deliver in its final act. Yet the first hour or so, with all of its suspense, plays out like a master’s class in psychological thrillers. This is appropriate, as Miller said he took cues from Hitchcock’s Shadow of a Doubt. Perhaps that’s what attracted Chan-wook to making his English-language film debut. He claims that Vertigo spurred him into filmmaking.

If we’re to examine Hitchcock, then, we can see that pivotal to any good suspense film is a strongly defined sense of place. Check. The Stoker estate is meticulously staged: India cracks hard-boiled eggs in her dining room while sitting in a high-backed wooden chair. It rears up above all the seating around it, caging India, or cradling her. Note the yolk of the egg, which is the same shade of ochre as a dish hung on the far back wall, or as Kidman’s perfectly coiffed hair. Color is consistent and thrown back at us unexpectedly, amplifying space while at the same time shrinking it. The film’s palette in general is lush, replete with a textured warmth that insulates all of the proceedings at hand; there’s no sense of time here, and despite the fact that India’s birthday is said to have been in ’94, it could just as convincingly been in ’61.

Perhaps that’s due in part to Wasikowska’s performance. It should be no surprise to anyone that she’s good, but in India she finds a quiet depth that supersedes any of the work she’s done previously. Like Jennifer Lawrence’s Oscar-winning role in Silver Linings Playbook, Wasikowska was here called to express a wide range of emotions constantly, simultaneously. Unlike Lawrence (who, in playing Tiffany, was allowed room to be manic), Wasikowska must remain lethally controlled: India is quiet, withholding, angry, recklessly intelligent. Emotion may rack her body, but it will never control it. Accordingly, Stoker and much of its genius hangs in the balance between the furrow of Wasikowska’s brows and the unrelenting purse of her lips.

Also key to good suspense is strongly defined characters. The more ambiguous the motives, the more clearly delineated the players need to be. Stoker succeeds here largely thanks to its costume design, orchestrated by super duo Kurt and Bart. India spends the movie in sharply pleated skirts and loose, Peter Pan–collared button-downs. She is demure, muted. Her black and white saddle shoes, gifted to her by her father every year on her birthday, become Stoker’s defining motif. The first time she steps into heels signals the film reaching its climax. Evie, meanwhile, is elegant, and dressed in a way the film’s costume design team described as very “lady of the house” in an interview; this is encapsulated in the ivory silk slip she wears as she burns what’s left of her late husband’s personal belongings. Charlie wears fitted, deep-pocketed trousers, in which his hands are often buried, and regally colored V-necks. The stylists revealed that when dressing Charlie, Chan-wook instructed them to curate a color scheme from the plumage that would be found naturally on birds of prey.

Long before he struck it big in Korea with Joint Security Area and the Vengeance trilogy, Chan-wook studied philosophy at Sogang University. It’s still evident in his work today: It’s present in the carnal red of the pining widow’s bedroom and in the close-up of a needle puncturing a young woman’s blister. It is common territory in film to make the environment of the movie visually reflect the internal struggles of the characters; Chan-wook takes this a step further, so that we’re not sure if the characters are defining their world or being subsumed by it. Heels on, safety off, we see in India a stroke of brilliance, and, not to be redundant, a stunningly cinematic one at that.